The attack on a Dalit family in Faridabad days before the Khattar government’s first anniversary suggests that nothing has changed, opines Aditi Phadnis 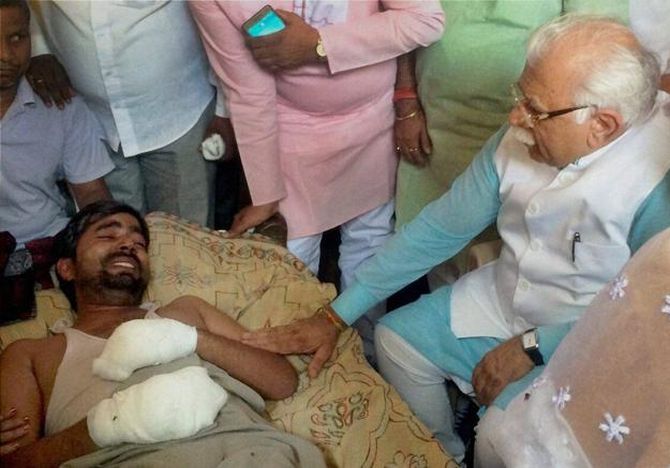 Haryana Chief Minister Manohar Lal Khattar meeting Jitendra whose house was set on fire allegedly by men belonging to the upper-cast community at Superh village in Ballabhgargh in Faridabad on Thursday. Photograph: PTI

“When I became the CM, my experience was zero. Now if anyone asks me, I will say I have one year’s experience… I know everything and how to solve which problem, I know it very well,” said Haryana Chief Minister Manohar Lal Khattar who will complete a year in office on October 26.

It was former Haryana Chief Minister BS Hooda who said it best. When asked how many marks he would give to one year of the Khattar government, he said succinctly: “This government? Zero out of zero”.

When asked what the Khattar government’s singular achievement in one year was, former Haryana government bureaucrats were left scratching their heads. “The search for the Saraswati?” said one hopefully, referring to the third in the trinity of holy rivers Ganga and Yamuna, which is believed to have run dry. Khattar has allocated Rs 50 crore to find the river which is supposed to be somewhere in Yamunanagar. “Beti Bachao Beti Padhao,” said another, about the campaign to educate girls and prevent pre-natal sex determination. But that is a scheme launched by the Union government.

The fact is, the Khattar government has done little to make its one year stand out. Attacks on Dalits in Haryana had become routine during the previous Hooda government, the shameful Mirchpur killings being a case in point. But the attack on a Dalit family in Faridabad days before the Khattar government’s first anniversary suggests that nothing has changed.

That’s the key phrase: Nothing has changed. In July 2014, months before it went out of power, the Hooda government appointed new state information commissioners. It was in such a hurry to legitimise the appointments, it didn’t even wait for a new governor to be appointed: Hooda called them home and swore them to office himself.

Haryana Administrative Reforms secretary Pradeep Kasni noted on file that rules had been violated in the appointments and recommended they be set aside. “The Hooda government, which has been going out of its way to re-employ its favourites, showed tremendous haste yesterday. The chief minister invited to his home those who had to take oath and administered the oath on a holiday. He did not even wait for the new governor’s nod,” BJP's legislature party leader and Ambala MLA, Anil Vij charged, a day after the swearing in.

Enter the Khattar government. What does it do? Not only does it retain the officers in the chief minister’s secretariat left behind by Hooda (and some before that, hired by OP Chautala), it also ignores Kasni’s noting. The state information commissioners continue to be in place. Meanwhile, as the matter reached the Punjab and Haryana high court via a PIL challenging the appointments, the Haryana government has said in its affidavit that the appointments are as per rules and no fault can be found with them -- wonder why?

Chandigarh’s chattering classes say this is par for the course. While they concede Khattar has a personal reputation for honesty, the same cannot be said of some of his colleagues: both in the state and in Delhi. And money is changing hands freely in bureaucratic appointments and posting. The same applies to changes in land-use cases. CLU was permitted over land adding up to around Rs 18,000 acres during the Hooda regime. Why was this done? Was it done according to rules? Does the Khattar government even know?

It took the government a year to ask Robert Vadra, son-in-law of Sonia Gandhi, why a company he owned, Skylight Hospitality, had sold land it had been allotted, to DLF and whether VAT was paid.

But surely that was not the issue. The Bharatiya Janata Party had alleged at the time that the land had been allotted illegally and there was insider information that it would appreciate quickly. Hence it was re-sold at a tidy profit. But all that the Khattar government is asking is whether all the taxes were paid by Skylight Hospitality. No CLU files have been reopened. And Vadra’s case is miniscule in relation to the value of CLU sanctioned by the previous government.

Basically nothing has changed -- except caste. Earlier it was the Jats who dominated the secretariat landscape. Now it is the Punjabis. Retired civil servants say the gap between the people and the government is widening. The year has not been kind to the people of Haryana. 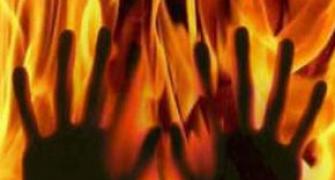 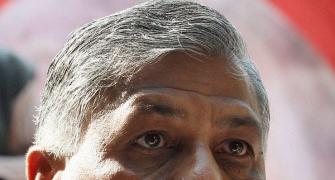 Boo V K Singh on Dalit killings: Not govt's fault if one stones a dog 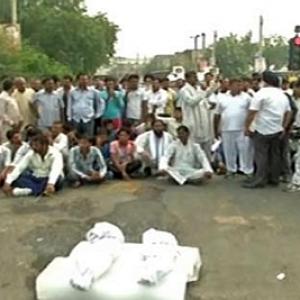 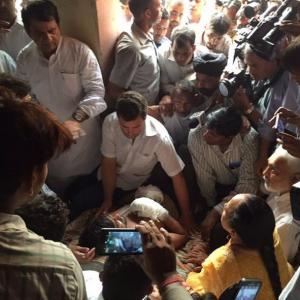