For me, Arundhati (Chukku) Ghose was the last word on multilateral economic issues when we worked together in the ministry of external affairs on UN affairs.

If her disarmament persona had not made her a celebrity in that area, she would have been known for the work she did in economic matters in different capitals.

She was highly respected for her views and no one wanted to be seen on the opposite side of the argument with her. But she was always patient in explaining her position and in accommodating different perspectives, says Ambassador T P Sreenivasan. 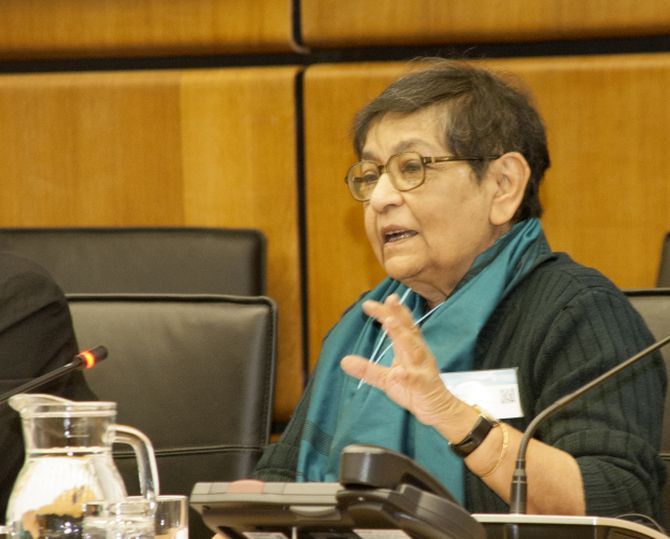 India will never sign this unequal treaty, not now, nor later!"

These words of Ambassador Arundhati (Chukku) Ghose, which reverberated in the UN General Assembly Hall in New York on September 10, 1996, turned out to be the words that diplomatic dreams are made of. They became legendary in the annals of the global disarmament negotiations. (In some versions of her speech, she is reported to have said, "Not now, not ever").

The speaker also became a legend not just because of these words alone, but because of the tenacity, clarity and determination with which she articulated India's position throughout the negotiations. She made an effort to forge a consensus on the idea of a Comprehensive Test Ban Treaty, which was first proposed by Pandit Jawaharlal Nehru, making constructive suggestions and leaving no one in doubt that India would never accept a discriminatory regime on the lines of the NPT. But finally, she declared in no uncertain terms that India would not sacrifice its national interest and sovereign right to join a "flawed and eternal treaty."

The speech in which Ambassador Ghose announced India's rejection of the CTBT in the shape in which it was presented was a masterpiece.

"Mr President, General Assembly resolutions are the expression of the will of nations in which multilateral treaties can find their sanction. General Assembly resolutions by definition cannot support violations of international law. The text circulated by the sponsors contains a provision in its Article 14 on Entry into Force, which is contrary to the fundamental norms of international law. This provision, which makes ratification by India and 43 other countries essential for Entry into Force of this treaty, was introduced after India had clearly stated that it was not in a position to subscribe to this treaty in its present form.

“Customary international law lays down that no obligations can be imposed on a country without its specific consent. We had indicated that we would withhold our consent to the treaty text unless our concerns were addressed. We did not want such a provision on Entry into Force to be included in the text and repeatedly urged the Conference on Disarmament to change this article, so as to enable those countries who wanted the Treaty, flawed though it was, to achieve it, if that was indeed their intent, though it would have been without India's signature.

“We could have prevented, Mr President, the present sad turn of events in which a text which runs contrary to customary international law has been brought for adoption to the General Assembly of the UN.

“Mr President, I would like to declare on the floor of this august Assembly that India will never sign this unequal treaty, not now, nor later. As long as this text contains this article, Mr President, this treaty will never enter into force."

When Ambassador Ghose passed away recently, a grateful nation paid rich tributes to her for her diplomatic skills, firmness and grit, which served India well, whether it was in Mujib Nagar, where she nurtured the fledgeling Bangladesh government-in-exile, in innumerable international economic forums, in Egypt or in the Republic of Korea.

When I heard about the sudden and sad demise of Ambassador Ghose, I searched out a book, The Final Test, a history of the CTBT negotiations, presented to me by Ambassador Jaap Ramaker, my colleague in Vienna, who had played a major role in the negotiations. The book has a tongue in cheek inscription: ‘To Ambassador Sreenivasan, whose country's Prime Minister was the first to express the idea to prohibit nuclear test explosions.’

I wanted to know how he may have described Ambassador Ghose, who must have given him the greatest headaches in Geneva. Though he quotes her in several sections of the book, he has refrained from making any observations on her in what is essentially an objective account of the negotiation. But I remember that he was full of praise for her for her "feisty" defence of India's interests with unfailing charm.

In fact, the two attributes that describe Ambassador Ghose are her unfailing charm and her uncompromising insistence on quality. The latter gave her a formidable image, but her kindness, generosity and sympathy became evident soon enough to her colleagues.

For me, she was the last word on multilateral economic issues when we worked together in the ministry of external affairs on UN affairs. If her disarmament persona had not made her a celebrity in that area, she would have been known for the work she did in economic matters in different capitals. She was highly respected for her views and no one wanted to be seen on the opposite side of the argument with her. But she was always patient in explaining her position and in accommodating different perspectives.

Ambassador Ghose's writings, speeches and interventions in debates after her retirement were indispensable for the foreign policy narrative in Delhi and elsewhere. She was my guest at a major international conference in Thiruvananthapuram and a couple of days she spent afterwards in our home were most enjoyable intellectually. She patiently explained the intricate issues of disarmament and economic negotiations in a free wheeling interview on Asianet and in many private conversations in Kerala.

An eminent journalist, Kumar Chellappan, expressed surprise "to note that the diplomatic community is silent about the passing away of Arundhati Ghose, former Indian representative to the Disarmament Conference at Geneva”. I replied, "IFS is not silent at all. The tributes being paid to her are not in the public space, but they are rich, poignant and intense. She was one of our best."

The Foreign Service is unanimous in its view that she has done our nation proud. She will be remembered with respect and affection. 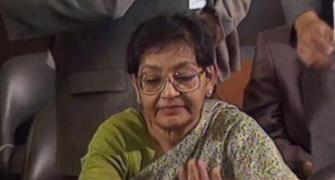 Ex-diplomat Arundhati Ghose, who led India's opposition to CTBT, dies
'India dislikes being told what to do'
'For us, the big thing is China'

From Our Archives: The Arundhati Ghose interview

Arundhati Ghose says India should opt out of CTBT