News
Business
Movies
Sports
Cricket
Get Ahead
Money Tips
Shopping
Sign in  |  Create a Rediffmail account
Rediff.com  » News » Nobel Prize went to an idea whose time has not come

‘To give the Nobel Prize to a group, which led the effort to produce a still born baby is either the height of optimism or the depth of despair.

'To imagine that no one contributed to global peace to deserve the prize in 2017 is to be extremely cynical about peacemakers around the globe,’ says Ambassador T P Sreenivasan. 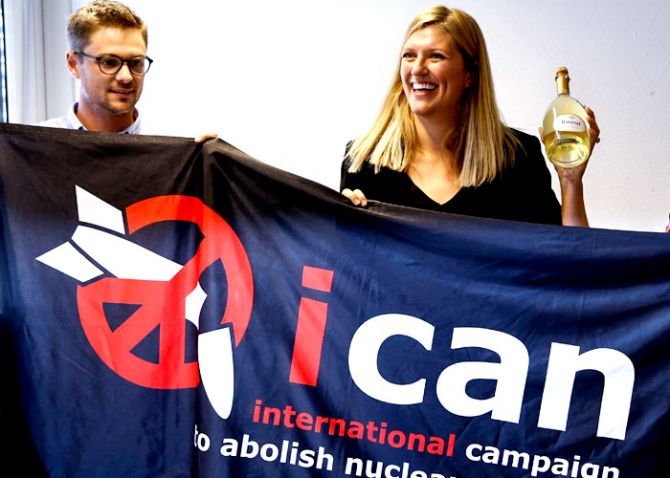 It looks that the world will become much worse before it gets better and the Nobel Peace Prize this year to an anti-nuclear group does not seem to help, says T P Sreenivasan.

The Economist characterised the award of the Nobel Prize for Peace to ICAN this year as ‘a nice but pointless idea’, while the Times reported a quote from a statement by ICAN itself.

‘This prize is a tribute to the tireless efforts of many millions of campaigners and concerned citizens worldwide who, ever since the dawn of the atomic age, have loudly protested nuclear weapons, insisting that they can serve no legitimate purpose and must be forever banished from the face of our earth.’

The Washington Post wryly observed: ‘The Nobel Peace Prize for an anti-nuclear-weapons group probably won’t please the US.’

The truth is that ICAN and others pushed an idea in the UN, whose time had not yet come and managed to get a resolution adopted by the General Assembly with 122 votes in favour calling on each member state to undertake never under any circumstances to develop, test, produce, manufacture, otherwise acquire, possess or stockpile nuclear weapons or other nuclear explosive devices.

These and other concrete measures outlined in the resolution were aimed at eventual elimination of nuclear weapons and create a non-nuclear world. All nuclear weapon states, whether recognised as such or not, including India, boycotted the negotiations.

By no stretch of imagination could this be considered realistic or even hopeful and the time had not come for the move to be meaningful. But the Norwegian Nobel Committee, though aware that an international legal prohibition will not in itself eliminate a single nuclear weapon, wished to emphasise that every step, however humble, towards nuclear disarmament should be commended.

‘This year’s Peace Prize is, therefore, also a call upon these states to initiate serious negotiations with a view to the gradual, balanced and carefully monitored elimination of the almost 15,000 nuclear weapons in the world.’

This is not the first time that the Nobel Committee is giving the Peace Prize in anticipation of good work. The prize awarded to Barack Obama, while he was still fighting wars, was to encourage him to take disarmament measures. The Committee was fully vindicated when Obama not only pledged to eliminate US nuclear weapons in an indeterminate future, but also initiated peace measures with Russia, China, Iran and Cuba.

The advent of Donald Trump has set the clock back on every issue, but that did not mean that Obama did not deserve the prize for his efforts.

The decision to convene the Conference for negotiations followed the recommendation of an open-ended working group on taking forward multilateral disarmament negotiations.

The open-ended working group specified in its report that a legally binding instrument to prohibit nuclear weapons would establish general prohibitions and obligations as well as a political commitment to achieve and maintain a nuclear-weapon-free world.

The primary mandate of the open-ended working group was to address concrete effective legal measures, legal provisions and norms that would need to be concluded to attain and maintain a world without nuclear weapons.

More than 70 years after the world witnessed the devastating power of nuclear weapons, a global treaty has been approved to ban the bombs, a move that supporters hope will lead to the eventual elimination of all nuclear arms.

The treaty was endorsed by 122 countries at the United Nations headquarters in New York in July after months of talks in the face of strong opposition from nuclear-armed states and their allies.

All the countries that bear nuclear arms and many others that either come under their protection or host weapons on their soil boycotted the negotiations. The most vocal critic of the discussions, the US, used the escalation of North Korea’s nuclear and ballistic missile programme as one reason to retain its nuclear capability.

The Government of India and the media played down the negotiations as an irrelevant exercise, primarily because of lethargy to explain India’s position on a non-starter. For a country that had repeatedly called for a binding treaty to prohibit nuclear weapons, India’s decision to boycott the negotiations was understood, but not appreciated.

In its Explanation of Vote given for its abstention on the resolution in October, India had said that it was ‘not convinced’ that the proposed conference could address the longstanding expectation of the international community for a comprehensive instrument on nuclear disarmament.

Underlining that international verification was essential to the global elimination of nuclear weapons, India had said it feels that the current process did not include the verification aspect. In line with its position that India articulated in the Explanation of Vote, the country had decided not to participate in the negotiations for the treaty.

The ban will come to effect only after 50 member states ratify the treaty and only 3 have ratified so far. Even if it comes to effect, it will have no effect on the countries, which possess nuclear weapons.

To give the Nobel Prize to a group, which led the effort to produce a still-born baby, is either the height of optimism or the depth of despair. To imagine that no one contributed to global peace to deserve the prize in 2017 is to be extremely cynical about peacemakers around the globe.

The argument given is that even if some countries do not accept it, it has set the high standards that everyone should aspire to. The European Union, which won the Nobel is on the wane and the world has not been covered with trees since Wangari Maathai was given a Nobel for leading a movement to plant trees in Kenya.

Alfred Nobel will be disappointed that the Peace Prize he instituted to find and honour those who have ‘done the most or the best work for fraternity between nations, for the abolition or reduction of standing armies and for the holding and promotion of peace congresses’ has hit an all time low.

One theory is that the Prize to ICAN sent a strong message to President Trump and President Kim Jong-un of North Korea that they would not be allowed to destroy the world by using their weapons. The head of the anti-nuclear campaign group criticised  Trump for ramping up a nuclear standoff and said the US president has a track record of ‘not listening to expertise’.

‘The election of President Donald Trump has made a lot of people feel very uncomfortable with the fact that he alone can authorise the use of nuclear weapons,’ she told reporters, adding that ‘there are no right hands for nuclear weapons’.

Fihn, who called Trump ‘a moron’ in a Twitter post just two days before the peace prize was announced, said the award sent a message to all nuclear-armed states that ‘we can’t threaten to indiscriminately slaughter hundreds of thousands of civilians in the name of security’.

Both Trump and Jong-un are made of sterner stuff and they will not be intimidated by a paper tiger even if it has the support of 220 states with no nuclear weapons. Global Zero is an idea, whose time has not yet come and the Nobel Prize cannot hasten it.

It looks that the world will become much worse before it gets better and the Nobel Prize this year do not seem to help. 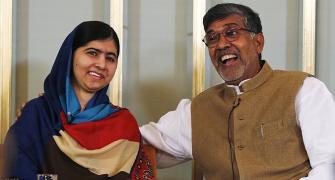 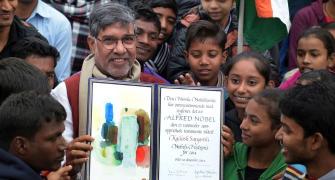 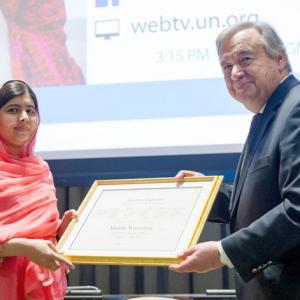