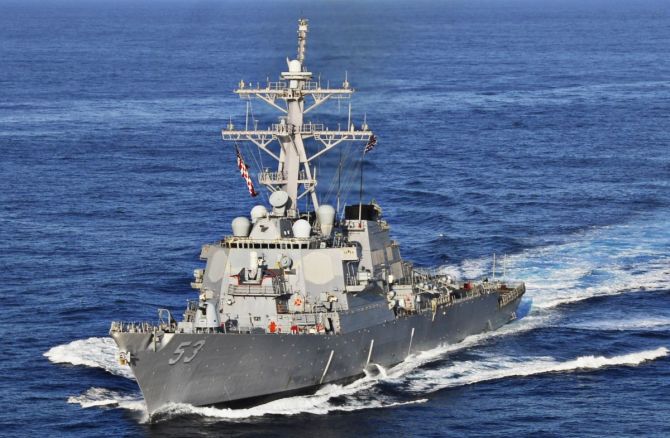 One leading daily noted it as a 'rare falling out between the two partners in the Quad grouping.' An anti-China analyst tweeted that it's just a 'botched PR exercise' on the part of the Americans.

The ministry of external affairs took a legalistic perspective (external link) as if it is answering a writ petition in the Delhi high court.

But, reflect seriously. Yes, this is a rare fracas within the cosy Quad family.

Yet, Quad is a toddler. What all can happen when President Biden grooms it into a boisterous adolescent?

Make no mistake, what happened is the military equivalent of what the great American diplomat-scholar George Kennan once wrote about the oil reserves in Persian Gulf -- they are 'our resources', he wrote, integral to America's prosperity and, therefore, the US should take control of them. (Which it did, of course.)

The ocean beds of South China Sea and Indian Ocean are sitting on unimaginable wealth of mineral resources -- potentially, the last frontier.

Spectre of acute future big-power scramble -- not only with China or Russia but also involving European rivals -- haunts Washington. With all their tragic colonial history, Indians tend to forget.

Thus, after 65 years, Britain is returning to 'east of Suez'.

The 65,000-tonne HMS Queen Elizabeth, Britain's newest aircraft carrier, is sailing to the Indian Ocean in its inaugural deployment.

The grandiloquent title of the impressive 114-page document released last month by the British PM Boris Johnson says it all -- Global Britain in a competitive age : The Integrated Review of Security, Defence, Development and Foreign Policy (external link).

The document says rather explicitly on Page 66-69 under the sub-title The Indo-Pacific tilt: 'Indo-Pacific is the world's growth engine: home to half the world's people; 40% of global GDP; some of the fastest-growing economies; at the forefront of new global trade arrangements; leading and adopting digital and technological innovation and standards; investing strongly in renewables and green tech; and vital to our goals for investment and resilient supply chains.'

'The Indo- Pacific already accounts for 17.5% of UK global trade and 10% of inward FDI and we will work to build this further, including through new trade agreements, dialogues and deeper partnerships in science, technology and data.'

It concludes: 'We (Britain) will also place a greater emphasis than before on the Indo-Pacific, reflecting its importance to many of the most pressing global challenges in the coming decade, such as maritime security and competition linked to laws, rules and norms.'

Again, the month of April will see French Foreign Minister Jean Yves Le Drian arriving in India to pursue political dialogue with India, and, importantly, the 42,500 tonne Charles de Gaulle aircraft carrier is leading a strike force to exercise with the INS Vikramaditya in two phases in the Arabian Sea and the Indian Ocean.

Without this 'big picture', India will keep counting the trees for the wood.

There are four things about the US Navy 7th Fleet statement on Friday (external link) that arrest attention.

One, it asserts in the very first sentence that this freedom of navigation operation (FONOP) took place 'inside India's exclusive economic zone, without requesting India's prior consent.'

Two, the statement rubs it in: 'India requires prior consent for military exercises or manoeuvres in its exclusive economic zone or continental shelf, a claim inconsistent with international law. This freedom of navigation operation (FONOP) upheld the rights, freedoms, and lawful uses of the sea recognised in international law by challenging India's excessive maritime claims.'

Now, don't the Indians know it? Of course, they do.

But the US must proclaim it to the entire Indian Ocean Region including Pakistan -- and European capitals alike -- that India's vaulting ambitions will not go unchecked.

Three, the US navy statement flags that FONOP 'demonstrate that the United States will fly, sail and operate wherever international law allows.'

Now, interestingly, this is Mike Pompeo's standard anti-China language. Plainly put, this is not a freak ('rare') event.

Besides, it's the Arabian Sea now, but it can be the Bay of Bengal tomorrow; it's a warship sailing by today but tomorrow it can be an American aircraft popping up on the roaring in the Indian skies asserting the US prerogative to operate in India's Exclusive Economic Zone.

Four, the statement has been issued since the Indians failed to take seriously that the FONOP are 'routine and regular... as we have done in the past.'

Presumably, Delhi hushed up such previous incidents. But the FONOP missions 'are not about one country, nor are they about making political statements.'

Simply put, the US regards India's EEZ as part of 'global commons' where it will exercise its (perceived) prerogative to act in its supreme national interests, as it deems fit. The 'defining partnership of the 21st century' with India will not inhibit Washington from pursuit of American interests.

The bottom line is that in the Indian Ocean Region, India should not punch above its weight.

It may not be a coincidence that Washington administered this firm stricture within earshot of Prime Minister Narendra Modi's highly-publicised High Level Virtual Event on Thursday (external link) with Wavel Ramkalawan, prime minister of Seychelles, for 'the joint e-inauguration of several development assistance projects funded by India in Seychelles and the handing over of a Fast Patrol Vessel supplied by India for the use of the Seychelles Coast Guard.'

But Washington regards Ramkalawan as the doggedly nationalistic leader of an Indian Ocean Region island nation that is a difficult neighbour, separated by a mere 1,894 kilometres of blue waters from Diego Garcia.

The establishment of a top secret military asset by India in Seychelles's Assumption Island is bad enough but the Modi government's reported plans of setting up a military base (external link) in that island nation is an entirely different proposition. (For all one knows, the media leak bears the stamp of US intelligence.)

However, now that the US warships have disappeared over the horizon, let us sit upon the ground and reflect sadly where all the heady Quad ('Asian NATO') misadventure is taking India.

The heart of the matter is that the ruling elites' seething sense of rivalry over China's rise is engendering a warped Indian mindset.

The Chinese commentators have been warning the Indian establishment repeatedly that its big power aspirations in the IOR are unrealistic (external link).

They were speaking from experience. In fact, contrary to the Indian narrative that Quad membership can be leveraged to extract concessions from China, Beijing thinks that Quad is more India and Russia's geopolitical headache, (external link) but it would intrinsically have no future, given internal contradictions (external link).

The Chinese scholars have consistently held the view that although the mainstream of the US-Indian cooperation nowadays has been cooperation instead of competition, 'in the specific case of the Indian Ocean, their respective strategic views on the regional power structure are deeply rooted and these will become more and more obvious in the case of the power shift' -- to quote from the prominent Chinese scholar Chunhao Lou, deputy director of the Institute of South Asian Studies at the China Institutes of Contemporary International Relations headquartered in Beijing.

In a 2012 essay titled US-India-China Relations in the Indian Ocean: A Chinese Perspective (external link), the leading scholar added, 'Although the China factor will always be there to promote US-India cooperation, the 'democratic peace theory' will give way to realistic politics, and the differing interests of the US and India in the IOR will be difficult to reconcile.'

The chickens are coming home to roost. 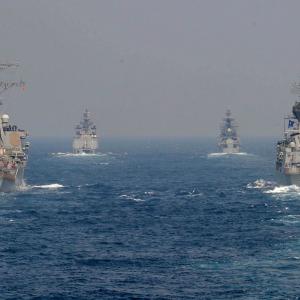 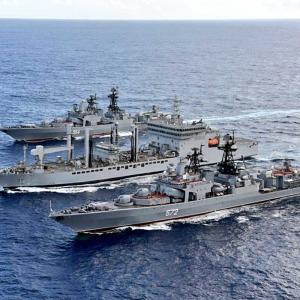