'Even as discord over US-India trade and commerce colours diplomatic relations, defence relations between the two countries remain on a firm footing,' points out Ajai Shukla.

IMAGE: A vintage car decorated with cutouts of Prime Minister Narendra Damodardas Modi and US President Donald J Trump and a placard reads 'Namaste Trump' ahead of the US president's visit to India in Ahmedabad, February 21, 2020. Photograph: ANI Photo

In Washington DC, after the second US-India 2+2 Ministerial Dialogue, in which US Secretary of State Mike Pompeo and Secretary of Defence Mark Esper co-hosted Defence Minister Rajnath Singh and Foreign Minister S Jaishankar, persistent questions from the US media about the continuing crackdown in Jammu and Kashmir and the passage of the Citizenship (Amendment) Act, which discriminates against Muslim refugees in granting Indian citizenship, made it clear that these issues are now front and centre in the American perception of India.

Since the warming of US-India relations two decades ago, Washington and New Delhi have both talked up the 'natural partners' rationale for partnership, with almost every US and India joint statement citing the 'shared values' between the two 'vibrant democracies'.

Lovers of realpolitik have tended to dismiss that as empty rhetoric, pointing to America's long and unlovely record of backing dictators -- not least Nguyen Van Thieu in Vietnam and the Shah of Iran; and in more recent times the undemocratic leaders of Pakistan and Saudi Arabia.

The cynics argue that expediency, not principle, dictates Washington's policy, and that even the post-Soviet expansion of the North Atlantic Treaty Organisation has involved a strong element of holding one's nose.

This argument, however, overlooks the fact that while Washington happily makes tactical compromises with strongmen and their authoritarian regimes, its strongest and deepest partnerships -- such as the Five Eyes alliance with Australia, Canada, New Zealand and the UK -- rest on the bedrock of shared values and worldviews.

Others argue that Donald J Trump can hardly accuse New Delhi of discrimination against Muslims, given his own misogynistic racism and his shameful imposition in 2017 of a travel ban on citizens of specified Muslim countries.

However, it should be remembered that his ban was repeatedly overturned by US courts, strongly opposed by the American media and by large sections of US lawmakers.

Trump is an aberration in the US polity and will cease to be president latest in January 2025.

The US administration has not so far meaningfully chastised New Delhi for discriminating against Muslims or its continuing detention of Kashmiri leaders.

Pressed by the US media on whether Washington had brought up these issues in the 2+2 dialogue, Mr Pompeo trod carefully, noting that 'We care deeply and always will about protecting minorities, protecting religious rights everywhere... and the US will be consistent in the way that we respond to these issues, not only in India but all across the world'; but also saving Indian face by telling the questioner that 'We honour Indian democracy as they have a robust debate inside of India on the issues that you raised.'

However, it would be hard to dispute that the US administration faces a new element of embarrassment due to its India relationship, something that will inevitably corrode the solid bipartisan consensus in the US Congress on the India relationship.

It would be prudent to anticipate that New Delhi's days of an unending free ride -- when it needed to do little for the US and just being India was enough -- are now coming to an end.

The implications of this are significant.

It might become increasingly difficult to obtain waivers from US laws on issues like the import of S-400 air defence missiles from Russia.

And India might now have to contribute more visibly and to take more visibly pro-US positions on certain issues, even where Indian interests would be better served by ambiguity.

With India's moral power diminished in global perceptions, New Delhi might have to compensate with other, more overt, forms of influence.

Washington backed India's security positions in the Indo-Pacific, while New Delhi catered to Chinese sensitivities by backing an Indo-Pacific security architecture 'based on the recognition of ASEAN centrality'.

The US side appreciated India's contributions to Afghanistan, but there was clear divergence over Washington's continuing peace talks with the Taliban.

Mr Pompeo said: 'We understand the concerns, too, that India has, rightful concerns that they have about terrorism emanating from Pakistan and we assured them that we would take that into account.'

On Iran, Washington urged New Delhi to back the 'maximum pressure campaign', even though the US has already granted sanctions waivers for India-Iran cooperation in the Chabahar Port and connectivity project.

The US side voiced 'common fears' on the risks associated with Chinese 5G communication networks, while the Indian ministers remained silent on this. 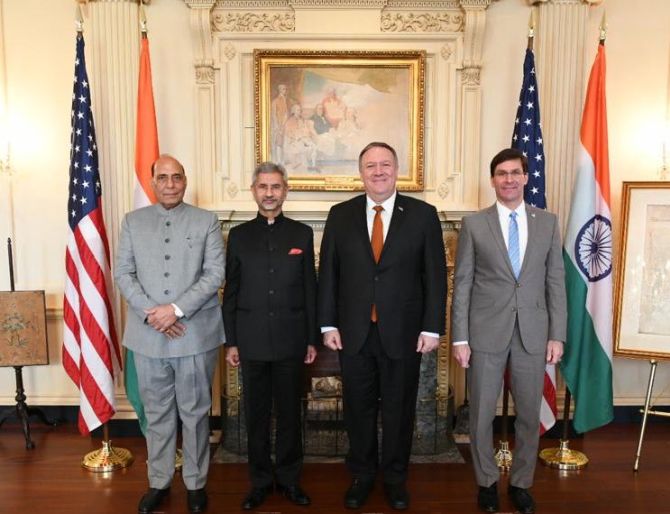 There was more visible progress on the defence partnership.

A clear achievement was the signing of an 'Industrial Security Annex' (ISA) that will facilitate the flow of critical US defence technology to India.

The ISA stipulates measures that Indian firms, including private companies, would need to take in order to protect sensitive US information and intellectual property, thus facilitating closer cooperation and collaboration between defence industries on both sides.

The start of negotiation for the ISA was announced during the first 2+2 dialogue in New Delhi in September 2018, which means it has taken just over a year to negotiate.

This is a measure of growing comfort between the two sides, since the two earlier 'foundational agreements' -- the Logistics Exchange Memorandum of Agreement signed in 2016; and the Communications Compatibility and Security Arrangement signed last year --both took over a decade.

That leaves just a single 'foundational agreement' to complete the military-legal framework that Washington requires for close defence cooperation -- which is the Basic Exchange and Cooperation Agreement (BECA), which will streamline the sharing of geospatial intelligence between the US and Indian militaries, allowing for, amongst other things, better navigation and targeting.

Vikram Singh, former deputy assistant secretary of defence for South and Southeast Asia who now advises the US-India Strategic Partnership Forum, says there was hope that BECA could be concluded early, but clearly areas of concern remain.

In the defence relationship, the two sides also announced the finalisation of three agreements under the Defence Technology and Trade Initiative for co-developing and co-producing critical technologies.

Also announced was the completion of a hotline between the two sides's defence ministers, a link between the navy headquarters in Delhi and US Indo-Pacific Command (USINDOPACOM) in Hawaii and the posting of an Indian naval officer at the US Naval Forces Central Command (NAVCENT) in Bahrain.

With the two sides cooperating closely in tracking Chinese submarines in the Indian Ocean, the cross posting of officers will help in coordination.

It was also agreed that, with the Indian Navy's 'area of interest' including the West Asian and East African littorals, senior US officers from Central Command (USCENTCOM) and Africa Command (USAFRICOM) should participate in joint training and patrolling.

Even as discord over US-India trade and commerce colours diplomatic relations, defence relations between the two countries remain on a firm footing.

Traditionally, as in the case of Pakistan, the Pentagon has been guided by alliance and security partnership concerns, rather than human rights, political and religious freedoms.

But India would do well not to test this tolerance and to return to the values that have brought it influence and admiration in the international arena. 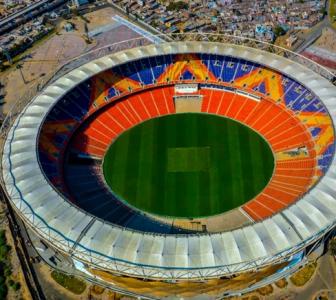 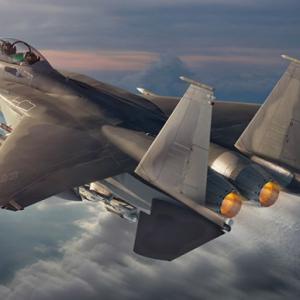