'The non-implementation of the Seventh Pay Commission, almost a year after it was implemented for civilians, is gradually beginning to hurt morale in the armed forces,' says Brigadier Gurmeet Kanwal (retd). 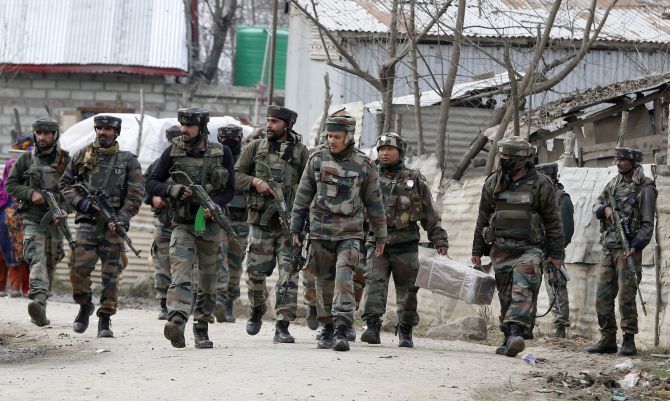 A salient trend line in the emerging character of conflict points to the fact that future wars on land, sea, in the air and in space and cyber-space will be increasingly fought by machines.

However, military history bears out that ultimately it is the man behind the gun who carries the day.

This is unlikely to change no matter how many robotic vehicles are fitted with weapons and programmed to operate autonomously on the battlefield.

And since he is a thinking human being, the man behind the gun has emotions and feelings. He gets angry and upset, or goes into a shell, or loses his sense of discipline or sulks.

All subalterns and young captains are taught to keep a close eye on the morale of the soldiers.

If their morale is down, they lose their motivation to fight well.

Immediate action is required to be taken to restore morale by identifying the causes and adopting all possible measures to eliminate them.

The non-implementation of the award of the Seventh Pay Commission, chaired by Justice A K Mathur, for the armed forces, almost one year after it was implemented for their civilian counterparts, is gradually, almost imperceptibly, but without an iota of doubt, beginning to hurt morale.

According to the veterans' grapevine, in Sainik Sammelan after Sainik Sammelan across the country, soldiers are asking their commanding officers why they are not being given their new pay scales when their friends and acquaintances in government services have got them.

The COs have no answers as the issue is 'under consideration of the government.'

How has this sorry state of affairs come to pass?

The answer to this question is incredibly bitter. Vis-à-vis civilian government employees, the three Services found some of the recommendations of the Seventh Pay Commission, as approved by the Cabinet for the armed forces, to be patently unfair.

The three chiefs of staff felt constrained to request then defence minister Manohar Parrikar to withhold implementation of the award till some of the major infirmities were rectified.

They said the armed forces may be given a 'delayed' award, but not a 'diluted' award vis-à-vis the civilian services.

They must have also reminded him that many of the anomalies of the Sixth Pay Commission had still not been resolved and they did not wish to inflict a similar situation on the rank and file again.

The minister agreed to take up the matter and promised them that their 'core' concerns will be given immediate attention.

The rank and file were informed and told to wait patiently.

Since then, over six months have passed, but the problem has still not been addressed.

To be fair to the PMO, a committee was reportedly appointed to look into the issues raised by the armed forces. However, it is not known whether the committee has submitted its report and it is under consideration, or if the committee is yet to submit its report.

Incidentally, there is not a single member, serving or retired, from the armed forces on this committee.

For that matter, there has never been a single member of the armed forces on any Pay Commission despite the fact that their personnel form a huge chunk (29 per cent) of total central government employees and their service conditions are far more challenging and hazardous.

What were the core concerns expressed by the army, navy and air force chiefs?

The major disparities pointed out included the following: Non-functional upgradation (NFU), already being given to civilians, should be given to the Services as well; the Defence Pay Matrix (DPM) should be brought in sync with the Civilian Pay Matrix (CPM); and the Military Service Pay (MSP) given earlier up to the rank of Brigadier should also be given to Major Generals.

An anomaly in the MSP given to JCOs and the Other Ranks also needed to be corrected.

The new anomalies have further widened the existing gap in status and parity between the armed forces and their civilian counterparts.

Two additional increments were already being given to IAS officers. This facility has now been extended to the IPS and IFoS as well.

The Pay Matrix approved for the armed forces will result in officers stagnating and drawing lesser pay, pension and percentage based allowances.

The armed forces have been short changed while fixing risk and hardship allowances also.

A Superintendent of Police posted at Leh or Shillong will receive Rs 54,000 as Special Duty allowance, SDA. Army officers posted at Leh will get Rs 13,900.

In Shillong army officers are not entitled to any allowance at all.

While civilian personnel who suffer disabilities will continue to get disability pension according to the existing 'slab' system, which is advantageous, armed forces personnel have been relegated to a 'percentage' system of calculation.

Consequently, while a soldier retiring with 100 per cent disability will receive an additional monthly pension of Rs 12,000, a civilian official with similar disability will be given Rs 27,690.

It is not so well known that as many as 46 anomalies of the Sixth Pay Commission have still not been resolved satisfactorily.

The three Services had requested the government to resolve these anomalies before the implementation of the award of the Seventh Pay Commission so that there is no distortion in fixing revised pay and allowances. However, the ministry of defence was unable to do so.

Soldiers, sailors and airmen cannot help but feel a sense of bias against them and rue the Commission's failure to recognise the risk that they take and the hardships and deprivation that they suffer on a day-to-day basis.

Successive Pay Commissions have also failed to appreciate that personnel serving in the armed forces retire at an early age, so that a youthful profile that is so necessary in battle can be maintained, and therefore need to be better compensated by way of pension.

The delay in implementation of the award of the Seventh Pay Commission has come on the heels of the OROP imbroglio, in which the government had inexplicably diluted the definition of one rank-one pension while implementing the long-pending pension reform.

As such, the non-implementation of the award was bound to have had an adverse impact on the morale of the nation's defenders.

A dip in the morale of armed forces personnel must ring alarm bells in South Block.

The government must move post haste to rectify the core concerns of the armed forces and approve just and reasonable pay and allowances for them.

The government owes it to the men in uniform to ensure that they do not feel let down and do not think that all their sacrifices have been in vain.

IMAGE: Soldiers during an encounter in Bandipore, Jammu and Kashmir, February 4, 2016. 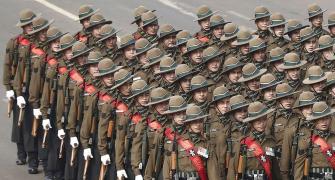 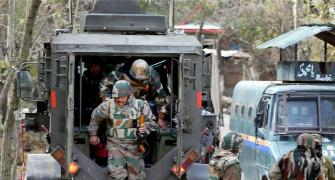