News
Business
Movies
Sports
Cricket
Get Ahead
Money Tips
Shopping
Sign in  |  Create a Rediffmail account
Rediff.com  » News » Modi's seats? Juggle 543, and you will get it

The Modiquake has devastatingly hit all Opposition, predicts Nazarwala who predicted Mayawati's win in the 2007 UP elections, forecast her rout in the 2012 polls, and called right the 2017 UP assembly election result. 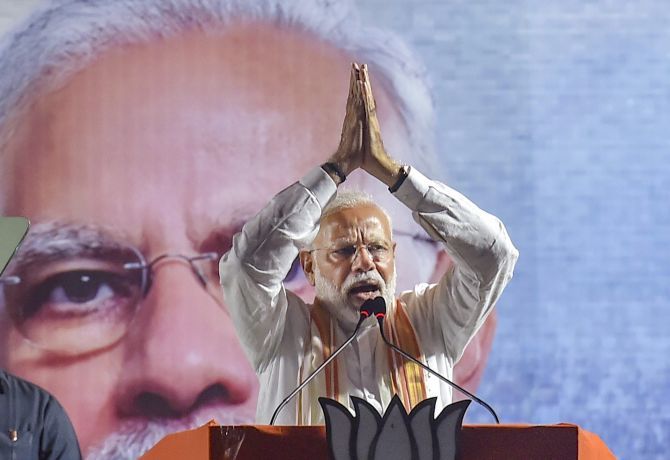 The 2019 Indian parliamentary election is over.

Those regular, conventional 'wave'-tracking experts have erred, because they have sensed no 'wave'.

Even that perspicacious observer Minhaz Merchant appears to have missed hearing those audible, earthy tremors.

He seems to have underestimated the incipient and silent wave reflecting the national mood.

Minhaz declared in his column that 'there is no Modi wave'.

Then there is Shekhar Gupta who walks on Earth, but refuses to hear the earth.

For, he disdainfully declares, 'There's nothing in the 2019 campaign air, the chunavi hawa, that tells you it's a wave election for anyone'.

This Solomon further delivers his conclusive judgment: 'We can say now with confidence that this election will result in a coalition government.'

'Don't ask me who will lead the next coalition, because I do not know.'

There has been a tectonic shift in voting this time.

The Modiquake has devastatingly hit all Opposition.

Modi has diligently slogged for Bharat that is India during the last five years.

And Bharat that is India has vociferously declared Modi as her beloved leader.

The Common voter refrain, pan-India, seems to echo sentiments such as:

The hybrid band of mahamilavati bandhan has been torn asunder.

With a major leap in his dream of making Bharat Congress-mukt, Modi has dwarfed others too in the process.

Sharad Pawar, Mayawati, Kejriwal, Naidu, Mamata, Sonia, and many more of their ilk have been shattered.

Modi has single-handedly pushed his quibbling Opposition into a five-year vanvaas.

Comedian Raju Srivastav succinctly sized up Rahul Gandhi as fit for television and Modi for vision.

By contrast, Rahul also had to work hard, foregoing his foreign vacations, despite which he has lost out in the competition.

Late entrant Priyanka Vadra has brought along her family luggage, which is in stark contrast to the simple and frugal lifestyle of Narendra Damodardas Modi, his mother Hirabai, and all family members.

There have been some gains -- more roads, rural works, cheap cooking gas for the poor, village toilets, uniform sales tax, a promising health insurance scheme which could end up benefiting 500 million families, and a new bankruptcy and insolvency law.

Modi's promises of more to come are credible, and have been trusted to deliver results.

India's voter applauded in silence, inside the polling booth, gleefully using the finger.

No candidate can match the sterling integrity and passionate patriotism of tapasvi Modi.

They are expected to add value and properly implement Modi's agenda in the field, and in Parliament.

Modi is a sanyasi with laser-focussed determination and commitment for Sabka Saath, Sabka Vikas.

There are 543 Lok Sabha seats to be fought for. The Modi Phenomenon is a very predominant factor.

The curious, if confident, can juggle the three digits of 543 any which way.

And, the reasonable judgement will not be too far wrong.

Tapasvi Modi, the patriot, has won.

The BJP-led NDA is all smiles -- to triumphantly stride into the new Parliament!