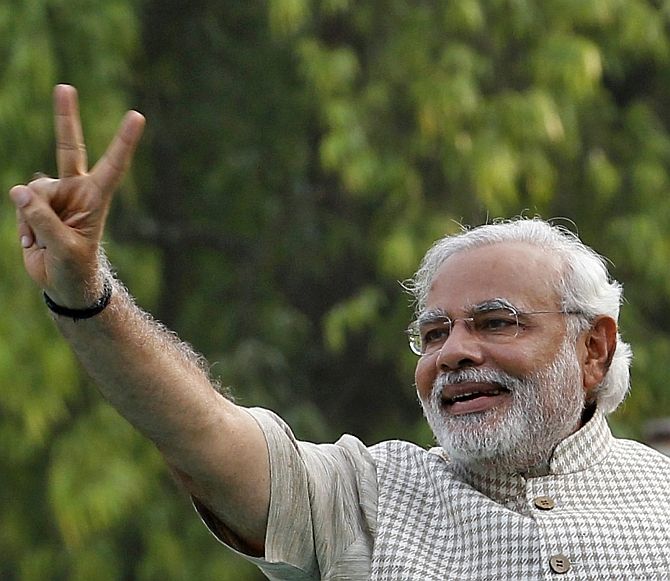 The prime minister's outreach to Japan is a recognition of the civilisational potential that the two nations hold and can wield in evolving an era of ‘Asianism’ in global politics, says Anirban Ganguly.

When his ship reached Nagasaki in July 1893, Swami Vivekananda was deeply impressed by his first glimpse of Japan. This short sojourn would awaken in him a deep yearning for exploring and re-kindling the lost civilisational link between his country and Japan.

“The Japanese are one of the cleanest peoples on earth,” exclaimed the Swami in a letter to his young Indian disciples, “Everything is neat and tidy. Their streets are nearly all broad, straight and regularly paved. Their pine-covered evergreen hills form the background of almost every town and village. Their movements, attitudes, gestures, everything is picturesque -- Japan is the land of the picturesque.”

Vivekananda’s instant emotional bonding with Japan, however, did not cease with a praise of its aesthetics alone. It would be interesting to recall in the present climate when Japan is being widely discussed in India, that in order to have a detailed understanding of Japan.

Vivekananda left his ship at Kobe and took the land route to Yokohama. It was the height of the Meiji period, when, as Carol Gluck in her detailed study of the Meiji era noted, the entire effort was to establish Japan as a ‘nation among civilised nations -- bunmeikoku no ikkoku’, an era when a ‘growing number of young Japanese were exposed to a wide diversity of opinion and when travel broadened…’ and new intellectual discourses took shape.

It was this national effort, then being made in Japan, of ushering in an era of modernisation with indigenous directions and roots which must have impressed Vivekananda. Having visited Osaka, Kyoto and Tokyo, what struck the Swami most was Japan’s ‘modern rage for progress, which was spontaneous in every department of knowledge'.

He expressed as much when he wrote how ‘fully awakened to the necessities of present times’ the Japanese seemed to be and that they were bent ‘upon making everything they [wanted] in their own country'.

Vivekananda saw re-evolving Japan as a model for Indian regeneration: “I want that numbers of our young men should pay a visit to Japan…Especially to the Japanese, India is still the dreamland of everything high and good.”

“Come see these people,” he exhorted the youth of India who, he complained, were busy then "promenading the seashores and repeating undigested stray bits of European brainwork…"

Towards the end of his life, Vivekananda would often refer to the Japanese love of their country: “Their country is their religion; the national cry is Dai Nippon Banzai! Live long great Japan! The country, before and above everything else. No sacrifice is too great for maintaining the honour and integrity of the country.”

For a subject people that rousing cry of patriotism was indeed deeply moving.

When the well-known Japanese intellectual and artist, Kakuzo Okakura (1862-1913), in his widely read Ideals of the East declared that “Asia is one”, he was essentially pointing at the possibility of recovering a lost civilisational concert in which the continuing Asiatic civilisations could play a renewed role in shaping a global order.

Okakura’s exhortation, and his visit earlier to India, which saw Vivekananda meticulously plan his cultural tour with the conviction that it would open up new vistas in India-Japan relations, galvanised Indian nationalists, they saw in Japan an ally in their struggle against colonial -- read Western hegemony.

Sister Nivedita (a disciple of Swami Vivekananda), in her introduction to Okakura’s work, essentially argued for the need to realise an underlying Asian unity hitherto dismissed by a dominant Western world order. It was, Nivedita argued, of ‘supreme value to show Asia not as the congeries of geographical fragments that we imagined, but as a united living organism, each part dependent on all the others, the whole breathing a single complex life.’

For the Indian nationalist, Japan and India were to form one of the most vibrant unities within this greater Asian unity.

In fact, one of the most intrepid revolutionary of the pre-Gandhian era, Rash Behari Bose, escaped to Japan, nearly a century ago, and carried on the Indian struggle from Japanese soil with help from some of the leading intellectuals of Japan.

The visit of the Indian prime minister to Japan, thus, is in a sense, a renewing of that ideational link laid long back by some of our most prolific minds.

Prime Minister Narendra Modi’s watershed visit to Japan, his reaching out to one of our natural civilisational allies, his proposed visit to the Toji temple in Kyoto, the reference to “India-Japan civilisational commonalities” and a dynamic agenda to actualise it in the present geopolitical context and his inaugurating the Vivekananda Cultural Centre, in many ways, indicate the advent of a nouvelle direction in India-Japan relations.

It is a recognition of the civilisational potential that the two nations hold and can wield in evolving an era of “Asianism” in global politics.

It is perhaps unique in Narendra Modi’s handling of foreign relations that the civilisational-cultural aspect is emphasised in equal measure with the commercial-strategic -- in fact it points to a stark understanding of the fact that in the context of external relations the civilisational-cultural dimension should essentially form the overarching or primary texture for weaving geopolitical strategies and effectively deliverable relations for our times.

The visit is an opportunity for establishing an “Asian Concert” which can invite like-minded countries in the region to get involved in the effort to create a more balanced and equitable Southeast Asian and Far East Asian region. India’s reaching out to Myanmar and Vietnam in the last hundred days is indicative of her earnestness to evolve such a functional “Asian Concert.”

The prime minister’s visit shall further the possibilities of laying a framework for enhanced cooperation among countries of the region and India in safeguarding mutual security interests.

Especially in the context of the South China Sea a “coalition of like-minded countries including the members of the ASEAN” and other maritime entities may perhaps be emphasised. An enhanced India-Japan security cooperation framework, civil-industry to industry cooperation, civil-nuclear cooperation and cyber-security cooperation are some of the other issues that are on the table.

Leading scholar of geopolitics, Kishore Mahbubani, has recently observed that “Modi must now lay the foundations for India’s emergence as a global economic power”.

Modi's Japan trip is an early step towards that emergence of India, not only as a global economic power, but as a civilisational power with global aspirations. 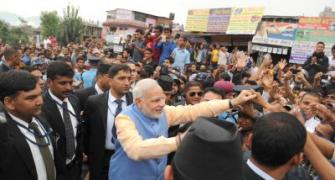 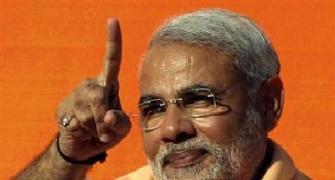 Modi to pitch for Suzuki factory during Japan visit

"Moshi, moshi": PM Modi tweets in Japanese ahead of visit 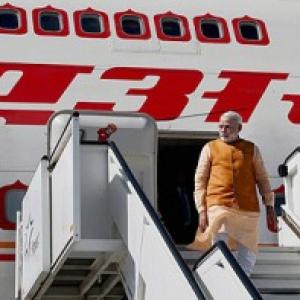 PM Modi to travel to Japan on August 31