Two years in office, there is very little to show for the Modi government by way of ‘achievements’ on the foreign policy front, and his China, Pakistan policies are gasping for breath, says Ambassador M K Bhadrakumar. 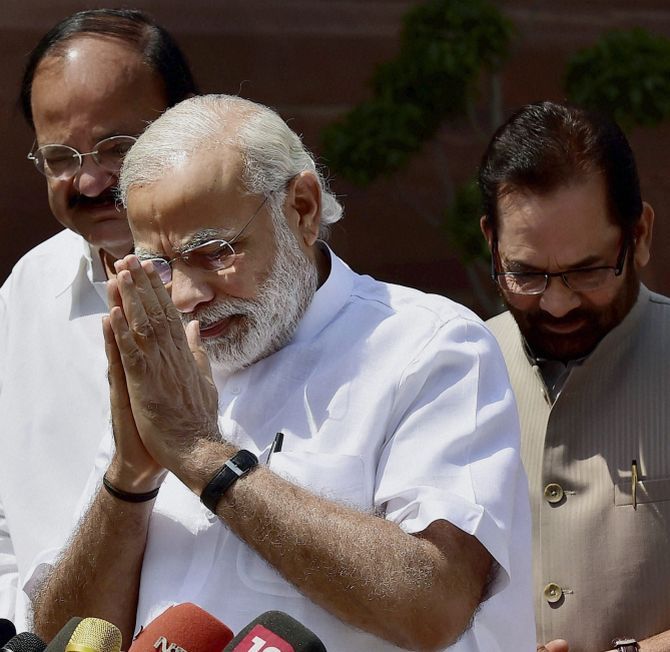 India’s policies toward China and Pakistan are in a logjam -- caught between the demands of Hindu nationalists who form the power base of the government of Prime Minister Narendra Modi and the rejectionist camp that opposes tooth and nail anything and everything that Modi does, such being their visceral hatred toward the man and his politics.

Indeed, a curious dialectic surfaced last week -- a synthesis of the above two antithetical camps -- prompted by Modi’s decision to retract from the government’s impetuous move to grant visa to a prominent Uighur separatist.

The so-called 'Modi bhakts’ (acolytes of Modi) and the brigade of Modi-baiters temporarily reconciled and formed a new thesis -- namely, Modi made a Himalayan blunder by Monday’s decision.

The dialectics of course will start all over again but it is important to try to understand the implications of such a synthesis.

Both Modi bhakts and Modi-baiters are anarchists. They do not form a single particular worldview and there are fundamental differences between their schools of thought, but ‘anti-statism’ remains central to both.

One side tries to negate everything in the IndianState that is not compatible with their ideology of strident Hindu nationalism, while the other side rejects that Modi leads an elected government that is entitled to complete the term in office.

Of course, it is the Modi bhakts who deserve greater attention here, because they are what the late Yugoslavian political thinker Milovan Djilas famously called the ‘new class’ -- our nomenklatura.

They have been restive for a while. In the social network sites, the zing has vanished from their defence of the Modi government.

Probably, there is little to defend and even less to celebrate. Their ecstasy over Modi’s foreign policy 'achievements’ was all along artificial, because it was pinned on illogical scenes such as his celebrated Madison Square Garden splash in New York and his countless meetings with US President Barack Obama.

Surrealist works thrive on the element of surprise, unexpected juxtapositions and non-sequitur. Take them away and surrealist praxis loses elan.

Suffice to say, the two-year long golden age of surrealism in India’s foreign policy has ended. But Modi bhakts are yet to grasp this reality. The resultant disorientation is evident all over.

A nadir was reached as 2015 drew to a close, when Modi visited Prime Minister Nawaz Sharif’s family estate near Lahore on December 25.

But then, the terrorist attack on Pathankot airbase took place soon thereafter. The government tried to cover its embarrassment by allowing the bizarre visit by a Pakistani team of intelligence officials to visit the base and check out the veracity of the allegation that they only had sponsored the terrorists.

Of course, it was a road to nowhere. Meanwhile, the government switched tack and decided to ‘isolate’ Pakistan by making Masood Azhar, leader of the Pakistani militant group that allegedly carried out the Pathankot attack, the pivotal figure, and pushing an attempt to put him in the UN ‘watchlist’.

Enter China. Beijing used its privileges as a veto-holding UN Security Council member to thwart the Indian design to isolate Pakistan. To be sure, a blame game ensued, with the government pointing a finger at China for ‘doublespeak’ on the issue of terrorism.

Frankly, no one believes that the UN is the right forum to fight international terrorism or that China would ever allow Pakistan (with whom it has a friendship “higher than the Himalayas” and “sweeter than honey”) to come under international pressure.

New Delhi took out its frustration by deciding to organise a conference of Uighur separatists living in the West, under the patronage of the Dalai Lama, spiritual leader of the Tibetans.

Through this attempted fusion between Tibetan and Uighur activists under Indian canopy, New Delhi hoped to corner Beijing on the Azhar issue where all diplomatic entreaties failed.

India was punching above its weight, but the Modi bhakts exploded into rapturous joy, because this was exactly what Modi had promised them -- stare down China and make it acknowledge India’s growing power.

The Modi bhakts deserve pity. Why is the Modi government subjecting them to such trauma?

But then, if they are today stupidly clamouring for China’s break-up or Pakistan’s dismemberment -- two nuclear powers -- what brought them to such a horrible pass?

To be sure, Modi himself is the problem. He should never have led his naïve followers to believe that once he came to power, he would dismember Pakistan and stare down China.

Whether he was consciously leading his followers into a fantasyland becomes a moot point today. The only charitable explanation possible is that Modi was probably on a learning curve himself.

Two years into power, there is very little to show for the Modi government by way of ‘achievements’ on the foreign policy front. Modi’s much-acclaimed ‘Make in India’ project -- galvanising India’s manufacturing industry through foreign investment -- is yet to take off.

The economy is growing but doesn’t lead to job creation, neither to absorb the youth who enter the job market -- 1.5 million every single month – nor to make a dent on the massive backlog of unemployment.

The spectre of famine haunts swathes of rural India. Anywhere near 500 million Indians live below the poverty level. To be sure, India needs a peaceful external environment that allows single-minded focus on national priorities.

But the disconnect between foreign policy and national priorities is complete. Modi is caught between the rock and a hard place.

His ardent followers, fired up by the rhetoric of Hindu nationalism, expect him to pursue a muscular foreign policy towards China and Pakistan. Whereas, he knows by now the severe limits to India’s power to chastise China or Pakistan.

Without doubt, the cancellation of visa to the Uighur separatist on China’s watchlist, which was ordered by Modi over the weekend, was the right thing to do.

Equally so is Modi’s decision to return to engagement with Pakistan. The foreign secretaries of India and Pakistan met in New Delhi on Tuesday.

The heart of the matter is that India’s foreign policy discourses got denuded of realism through the past two-year period and got cocooned in a world of make-believe, thanks to jingoism and grandstanding and the myopic ideology of ‘Hindutva’.

China can be a unique partner in India’s development and Beijing is not only eager but is willing to let India decide the pace and directions of cooperation.

Again, dialogue is the only way forward with Pakistan and for such policy to be result-oriented, dialogue should be on a sustained basis.

However, one cannot be sure what Modi might do next. His trademark in statecraft is to take course correction when he runs into a cul-de-sac but allow long, unexplained periods of drift to fill in the interregnum.

Modi is bereft of any natural ally in the foreign policy arena. The ruling party’s divisive agenda has sharply polarised domestic opinion.

The majority opinion may favour normalisation of India’s relations with China and Pakistan but will refuse to support Modi’s stewardship. Such is the strong antipathy he evokes.

On the other hand, he needs to be constantly looking over his shoulder at his core constituency of raucous Hindu nationalists brimming with hubris.

The result is a stalemate in the China-Pakistan policies. Modi is hamstrung from pursuing rational, far-sighted policies towards China and Pakistan. Yet, he probably realises that these are two of the most consequential relationships for India’s foreign policy. 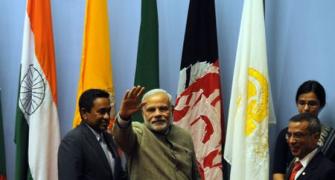 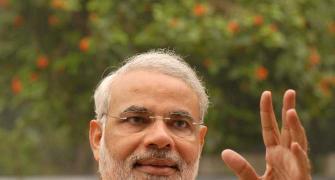 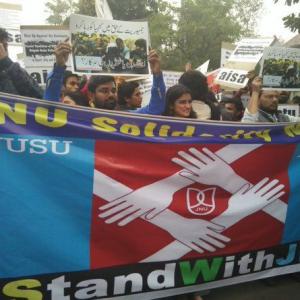 The seeds of the Modi Sarkar's defeat