Like China, India too should connect the dots and move ahead with a long-term perspective in Afghanistan, advises Ambassador M K Bhadrakumar, who played a stellar role in beginning India's dealings in Afghanistan in 1994. 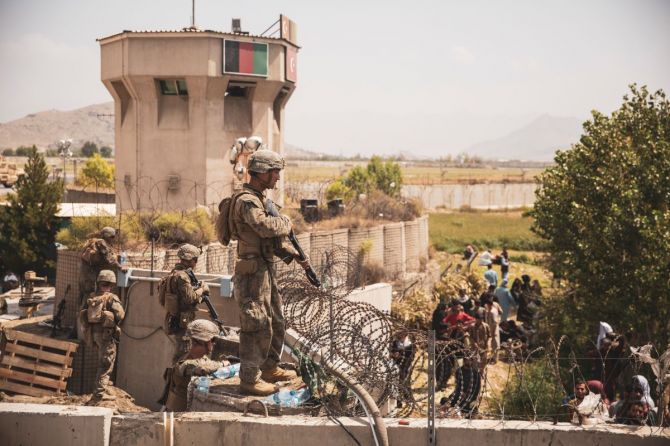 The Taliban has warned that there will be consequences if the Biden administration were to extend the timeline for its deployment at Kabul airport beyond August 31.

Britain is pressing for extension (backed by France and Germany) while President Biden remains ambivalent despite the war lobby in America piling pressure on him.

On the ground, the evacuation at Kabul airport remains a daunting task.

Most certainly, such a massive evacuation cannot be completed in another week.

There is no knowing even how many hundreds or thousands of Americans may still be in Afghanistan.

It is implausible that the Taliban won't negotiate. There is remarkable consistency so far in its hesitancy to confront the US.

To be sure, Pakistan also must be working behind the scene to avert a flashpoint.

However, the clash at Kabul airport on Monday involving the US and German soldiers shows that the ground situation is dynamic and liable to change from hour to hour.

The Pentagon briefing on Monday played it down calling it an 'incident' and continued to maintain that the US military and the Taliban (the Haqqani Network) have a good working relationship.

Biden is under immense domestic pressure on the botched-up evacuation. Therefore, the Taliban's cooperation becomes vital.

But the Taliban plan is to announce the new government only after the foreign troops have fully evacuated.

Taliban spokesman Zabiullah Mujahid has been quoted as saying, 'There will be no new government in Afghanistan until the last US soldier leaves the country.'

Herein lies the catch. The Taliban plan was to go ahead with the formation of an inclusive government within the next fortnight so that the legitimacy of State power got enhanced.

This would also be the advice of Russia, China and Iran who are interested in an orderly transition without much delay.

A statement by the Shanghai Cooperation Organisation on Monday underscored the importance of 'responsibly' restoring the legitimacy of State power 'through an inclusive peaceful dialogue with the interests of all social, political, ethnic and religious groups taken into account.'

Importantly, the SCO flagged its intention to 'join international efforts to stabilise and develop Afghanistan with the central coordinating role of the UN.' 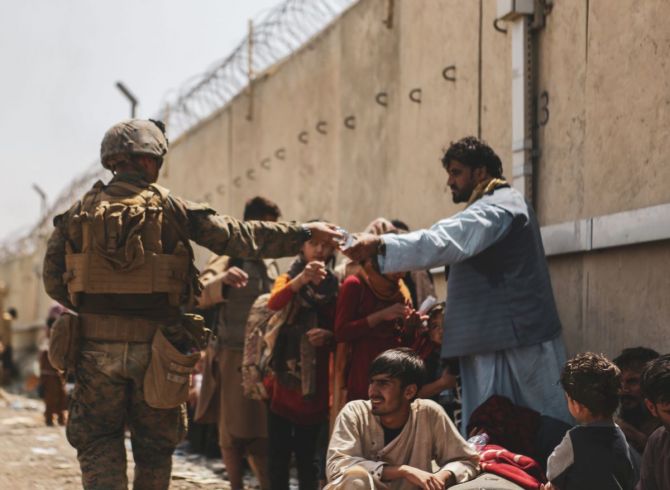 IMAGE: A US Marine passes water to evacuees during the evacuation at Kabul airport, August 21, 2021. Photograph: Isaiah Campbell/US Marine Corps via Getty Images

If the G7 takes the sanctions route, it will surely close the door on the West's constructive engagement with the Taliban.

China and Iran are setting their own compass to navigate such an eventuality.

Iran has resumed its oil supplies to Afghanistan (Taliban).

The Global Times reported on Monday that China is actively deliberating on its investment strategies in Afghanistan in anticipation of Western sanctions against the Taliban.

Chinese State-owned enterprises reportedly may prefer a wait-and-see approach, but private companies are 'eager to tap into a market where 'a thousand things wait to be done'.'

The Chinese companies bank on the Taliban's goodwill and hope to cash in on the Western sanctions.

The Global Times report openly flaunts 'China's successful diplomacy with the Taliban, which lays the foundation for the safe and smooth operation of Chinese businesses in Afghanistan.'

Second, the report assumes a radical improvement in the security situation.

There is even optimism regarding the commencement of work on the giant copper mine project in Mes Aynak (reputed to be one of the world's largest untouched copper deposits, which contains some 450 million metric tonnes of ore worth at least $50 billion.)

Another Global Times commentary last week had asserted that China is determined to pursue cooperation with the Taliban to extract Afghanistan's vast rare-earth metals that are estimated to be worth anywhere between 1-3 trillion dollars.

It disclosed that unnamed US mining companies have hitherto enjoyed exclusive privileges in exploiting rare resources in Afghanistan but the Taliban takeover is 'undoubtedly a heavy blow to US economic interests'.

On Monday, the Chinese foreign ministry expressed the hope that 'Afghanistan will form an open, inclusive, and broadly representative government, adopt moderate and prudent domestic and foreign policies and conform to the aspiration of its people and the common expectation of the international community.'

'China,' Wang said, 'stands ready to continue to play an active role in promoting peace and reconstruction in Afghanistan, and helping the nation to enhance the ability to achieve self-development and improve people's livelihood.'

This is the nearest China has come to announcing its strategy to spearhead the Afghan reconstruction.

No doubt, the Belt and Road is poised to take a big leap forward in the region.

China is positioning itself accordingly. With both Pakistan and Iran as close allies, China's economic and strategic footprints are slated to phenomenally expand in the Central Asian and West Asian region.

Indian strategists should anticipate all this instead of bandwagoning with the US and lingering in the shade brooding.

The single biggest outcome of Afghan developments will be that leitmotif of regional politics is shifting toward geoeconomics. And early birds, as they say, catch worms.

Indian investments in Chabahar port in southeastern Iran should not go waste.

The new thinking to plough a fresh start to India-Iran cooperation dovetails with the huge economic challenges and opportunities of Afghan reconstruction.

Bold thinking is needed. Like China, India too should connect the dots and move ahead with a holistic picture and long-term perspective. India lives in its region. 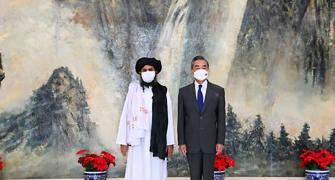 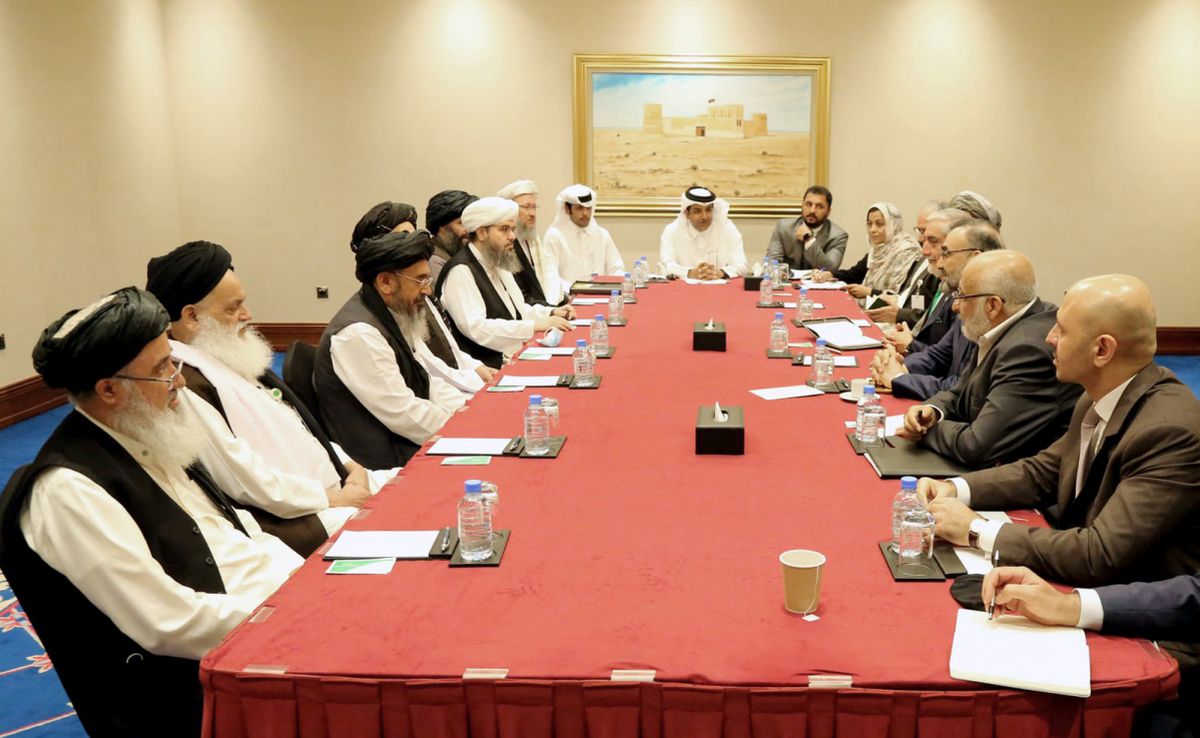 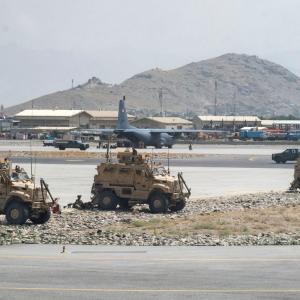