'The Union government has discouraged state and local governments from imposing restrictions on their own.'
'That advice should be withdrawn,' asserts Mihir S Sharma. 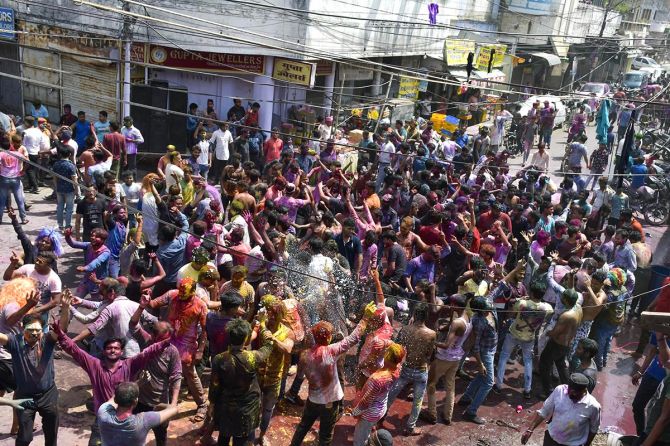 There is no question that a certain sense of complacency crept into India's efforts to manage and control the pandemic.

It is easy to understand why this might be the case.

The economy is, by most accounts, rebounding.

Since the end of last year, the number of cases had dwindled, and they remained under control through most of the country.

And the vaccination programme entered its second stage, wherein those most vulnerable to severe cases of the disease will be targeted.

Yet overconfidence would be a mistake.

First of all, while vaccination rates have increased markedly, we seem to forget sometimes that this is a very large country.

We need them to be five or ten times higher than they are currently if we are to get vaccines out to a large enough proportion of the country on a reasonable timeline.

Second, we have to be aware of the threat posed by mutations of the virus.

So far, according to officials, the Brazilian, British and South African variants of COVID-19 are not spreading in the community.

As Soutik Biswas of the BBC recently reported, less than 250 cases of the variants have been found in the country so far.

But, first of all, the experience has been that, when they do take hold, they swiftly displace the original variant.

It only takes a few undiagnosed cases for that to happen.

And, second of all, this may be severe undercounting.

India has not ramped up genomic sequencing of positive RT-PCR tests quickly enough.

Till fairly recently, barely 0.5-0.6 per cent of positive RT-PCR tests were sent for genomic sequencing to identify variants.

Money has now been assigned for it, but in order to get that proportion up to 5-10 per cent, a lot more work needs to be done.

Nor are India's border controls satisfactory at the moment.

Passengers at international airports from three high-risk geographies are being tested.

There is no reason why that testing requirement, alongside compulsory sequencing, should not be made universal.

It is not as if we can clearly identify where the variants are circulating, or who sat next to whom on a flight.

Finally, like many viral infections, even the original strain of COVID-19 may become more virulent during the change of seasons.

We still do not know for certain how it is being transmitted in most cases in India, and therefore it would be premature to assume that a third wave is impossible in the spring.

Certainly, Indians are more relaxed now about precautions than they were last autumn, at our last peak.

This carries its own dangers.

What can be done to respond, besides making genomic sequencing a central part of our testing regime?

One important step is to allow for the return of localised lockdowns if necessary.

The Union government has discouraged state and local governments from imposing restrictions on their own.

That advice should be withdrawn.

But most vital is to speed up vaccination.

While we are justly confident in our ability to produce the Oxford/AstraZeneca and the Bharat Biotech vaccines at reasonable scale, we need to relax our requirements for additional vaccines as well.

The reason is that, frankly, it is a crime to have vaccine manufacturing facilities sitting idle during a pandemic.

For example, why is the Johnson & Johnson vaccine not part of our arsenal?

It has been approved for use in the United States, and has demonstrated success against the South African variant.

J&J already has tied up with an Indian partner, which has set aside capacity to manufacture hundreds of millions of vaccines.

Why are we imposing stiff regulatory hurdles for an effective vaccine?

It is patently ridiculous to demand bridging trials in India for vaccines that have passed Stage III trials against more problematic variants of the disease than are currently in the community in India.

Nobody should argue against ensuring that regulatory compliance is absolute.

But even the World Health Organisation's advisory on bridging trials -- in other words, compulsory local trials for vaccines that have been found safe and efficacious elsewhere -- is that they should be conducted only if there is reason to believe specific local circumstances would change the results.

What such reasons does the government's scientific establishment have?

If they have none to present, then we should speed up approval of not just the J&J vaccine but others, like Pfizer, that have been proved efficacious elsewhere.

To sit back and rely just on the speed and size of the current vaccine pipeline would undo all India's hard work till now.