News
Business
Movies
Sports
Cricket
Get Ahead
Money Tips
Shopping
Sign in  |  Create a Rediffmail account
Rediff.com  » News » Make no mistake, we are at war!

'India has both the wherewithal and the will to fight the enemy, but is living in a make believe world of its own since it is yet to accept that it is indeed at war,' says military historian Colonel Anil A Athale (retd). 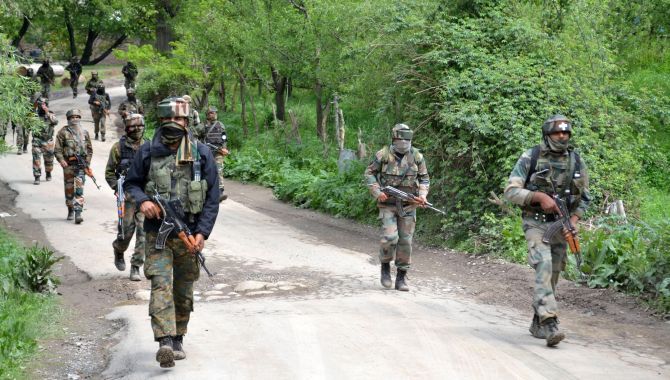 An intense debate has begun amongst defence analysts after a recent Supreme Court judgment that directed the lodging of first information reports for 1,500 odd deaths of militants in Manipur over a decade.

The court clearly sees the guerrilla war in Manipur as a 'law and order' issue and is keen to impose rules of law on rules of warfare.

The many critics of AFSPA (the Armed Forces Special Powers Act) argue similarly and are against the immunity granted to the armed forces engaged in this conflict.

One wonders what the response will be if the security forces also begin to lodge FIRs after every ambush or terror attack in which soldiers are killed?

By this logic, after the Uri killing of soldiers, instead of the surgical strikes, the Indian Army should have engaged a good lawyer and lodged a case against 'unknown' persons! It sounds ridiculous, but not too far from the future!

The crucial failing is the national need to accept that the country is actually at war!

The honourable justices came close by calling it a 'war-like situation.' Ordinary mortals like me fail to understand the difference between war and a war-like situation. Many have termed the present situation as a 'hybrid war.'

Military historians, a rare breed in India, are wont to see historical parallels every time a new term or type of warfare emerges.

So for a military historian like me, the present situation is quite similar to the Cold War era.

Military professionals, generalists and journalists are sceptical about it and scoff at it. Yet military history -- if understood not merely as a narration of events but seen as a process and analysed logically -- can teach us much about the present and help deal with the future.

After all, 2,000 years after the battle of Cannae that took place in 216 BC (Hannibal the Carthagian general, carried out a perfect double envelopment of the Romans) it remains every tactician's dream!

Let us not forget, today's battles are tomorrow's history!

The first thing to understand is that since 1987 or thereabouts, India has been at war! Unfortunately, many do not see it as such.

The judiciary views it from a Constitutional angle with wanting FIRs after every battle, yes, battle!

The common citizen is bewildered and cannot make sense of it all.

Some analysts have described this phenomenon as 'asymmetric warfare,' while others at various times have described it as insurgency, guerilla war, proxy war and even terrorism.

Every time a new warfare phenomenon appears, there is an example in the past that comes to mind. Warfare using guerrilla tactics behind enemy lines was very much part and parcel of even World War II.

Described as partisan warfare or the Resistance, these actions were complementary to the main action on the front.

The nearly 45 year-long Cold War between the USSR and the US comes closest to the current form of hybrid war. Both sides used proxy wars, subversion and sabotage to achieve one's aim.

Yet terror attacks like 9/11 in the US or the Beslan massacre (in which over 300 school children were killed by Chechen rebels) did not take place. The mainland of both contestants remained inviolable.

Even the proxy wars that the two adversaries fought were in third countries with no direct confrontation between the soldiers of the two sides. Both were mindful of the dangers of escalation and the existing balance of terror.

ISIS is waging a similar hybrid war in the territory it occupies in Syria and Iraq.

The crucial difference between the conventional or more familiar guerrilla war and hybrid wars is the emphasis on the use of terror, subversion and sabotage as the main form of engagement.

By its very nature, this is a 'low intensity war' and the target country often fails to see the strategic ramifications.

In a sense, hybrid war is a total war, in that it covers all spectrums from conventional fighting to subversion and propaganda.

Even more importantly, while the hybrid war is low intensity conflict at the tactical level, at the strategic level the aim is total victory.

This long term view of the threat posed by ISIS has prompted much of the global action against it.

India has both the wherewithal and the will to fight the enemy, but is living in a make believe world of its own since it is yet to accept that it is indeed at war.

'Gazwa e Hind or conquest of India is the avowed aim of the jihadis. The Pakistan army that has a State's resources aims for a break-up of India.

Since we have not understood that we are at war, our nation's considerable economic resources, its intellectual prowess, all its institutions, are not being mobilised to fight.

This is by far the greatest danger that hybrid war poses. We should be mindful of what Clausewitz said over 200 years ago: 'Woe to the nation who with shackled military takes on a foe who knows no law other than its own power like the mighty forces of nature.'

The first and the most urgent necessity is to accept the fact that we are at war! Once this is clear, everything else will fall in its place.

IMAGE: 4,000 Indian Army soldiers fanned out in Kashmir's Shopian district on May 4 in search of terrorists hiding there. Photograph: Umar Ganie for Rediff.com