At a time when nationalism is a much debated topic and the armed forces' sacrifices are being ignored, a 'Wall of Heroes', with portraits of Param Vir Chakra awardees at schools and colleges across the country to inspire the youth is a must, argues Tarun Vijay, who spearheads this initiative. 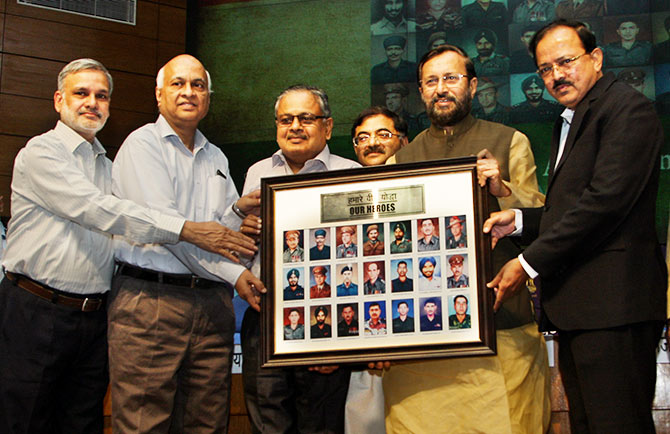 Major Leetul Gogoi, the army officer who tied a stone-pelter to the front of his jeep in the Kashmir valley, may have received the army chief's commendation card, but for many columnists his actions were reprehensible.

Pages and pages of news space were spent on criticising and maligning the armed forces and asking for severe punishment for Major Gogoi. However, these same columnists and human rights activists are mum on the harsh conditions our soldiers face while performing their duties.

Not one of them has written about the ideology of the thugs who encourage stone-pelters in the Kashmir valley.

The jihadis don't understand the language of decency and civility. Hence they needed a dose of their own medicine and that is what Major Gogoi showed them and won the hearts of a billion Indians.

I salute Major Gogoi and his ilk. We have to be ruthless and pragmatic while dealing with thugs in the Kashmir valley.

Amid all this, one wonders would Major Leetul Gogoi of the 53 Rashtriya Rifles, a hero, be the same if his school didn't imbibe nationalist values in him?

Would he be the same Gogoi if he had studied in an institution where slogans of Azaadi are heard?

Would he have the same rock-like commitment to save the Constitution and be loyal to his motherland if his upbringing was in an atmosphere where the 'plight' of a stone-pelter tied to a jeep was more important that the lives of our jawans? 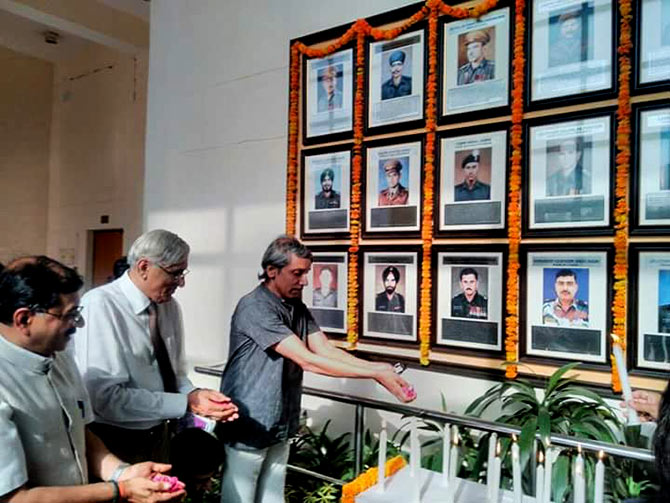 IMAGE: At Jawaharlal Nehru University, the first educational institution to honour the soldiers, Vice-Chancellor Professor Jagadesh Kumar, along with veterans from the armed forces, pay tribute after instilling the 'Wall of Heroes'.

Major Gogoi is a hero because he imbibed nationalist values at his school and college.

And it from this very thought that the Vidya Veerta Abhiyan or the Wisdom and the Valour Campaign for Educational Institutions -- WAVE -- is born.

As a part of the Vidya Veerta Abhiyan, a programme supported by the human resource development ministry, educational institutions like Jawaharlal Nehru University, Jamia Milia Islamia, Delhi University and IIT-Delhi at first will put up portraits of soldiers who were awarded the Param Vir Chakra, as a way of paying tribute to our armed forces.

It will also serve as a reminder to every student and teacher that they are safe on the campus and in the country because our soldiers are at the front, guarding the motherland, ready to live and die for it.

Our students must remember the names of our soldiers, the stories of their valour must be on the tip of their tongues. 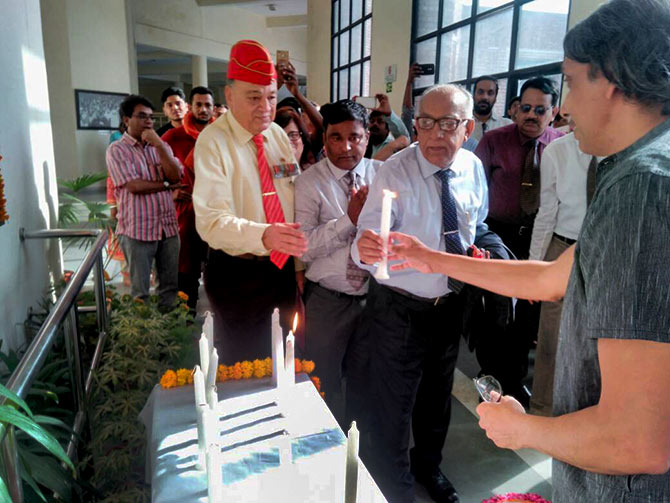 IMAGE: Veterans lit candles and paid tribute to the fallen heroes at JNU along with staff members and students.

Let us face it: We know the names of cricketers, of IPL winners, of pop singers who recently visited the country, but how many of us know the names of our soldiers who have been awarded the Param Vir Chakra, the ones who showed incredible courage? 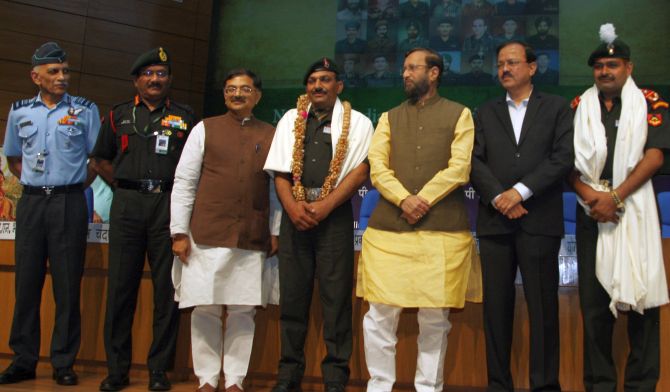 IMAGE: At the event where the Vidya Veerta Abhiyan was launched, Naik Subedar Sanjay Kumar and Subdedar Yogendra Yadav, who won the Param Vir Chakra for their valour in the Kargil War, were present.

Do we know of those who lay down their lives and of our retired soldiers who faced the gravest of dangers to ensure we sleep peacefully at night?

We display apathy towards our armed forces -- we, as a nation, don't respect them and only shout slogans or shed a tear when one of them dies.

Do we care to tell our children of those who brave the harsh weather at Siachen and the heat of Jaisalmer? Don't they belong to us as much as Rajinikanth, Aamir Khan, Sachin Tendulkar and Deepika Padukone?

Prime Minister Narendra Modi's speech to the soldiers in Leh rang true with me. And with his powerful words as inspiration the idea of the Vidya Veerta Abhiyan were born where youngsters would be taught about our soldiers' valour and the sagas of their sacrifices.

And the first college to adopt this campaign was the Jawaharlal Nehru University. 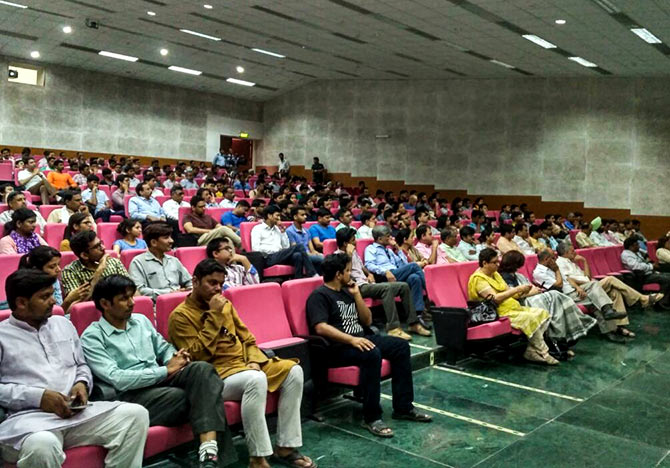 On May 16, coinciding with Prime Minister Modi's third anniversary in power, the 'Wall of Heroes' -- portraits of 21 Param Vir Chakra recipients -- was unveiled at JNU, an event which was attended by Union Human Resource Development Minister Prakash Javadekar and Minister of State for Defence Dr Subhash Bhamre.

A collage of portraits and a book on Param Vir Chakra recipients was also released and presented to vice-chancellors of universities.

JNU Vice-Chancellor Professor M Jagadesh Kumar said this was the kind of nationalism that was welcomed at the university and that a nation not only faces attacks from the outside, but from within too.

'If we are able to pursue our studies in class rooms it is because soldiers are safeguarding the nation,' Professor Kumar said. 'Hence we owe it to them to have their portraits to help our students get inspired, respect their valour and sacrifices and choose the army as their career.' 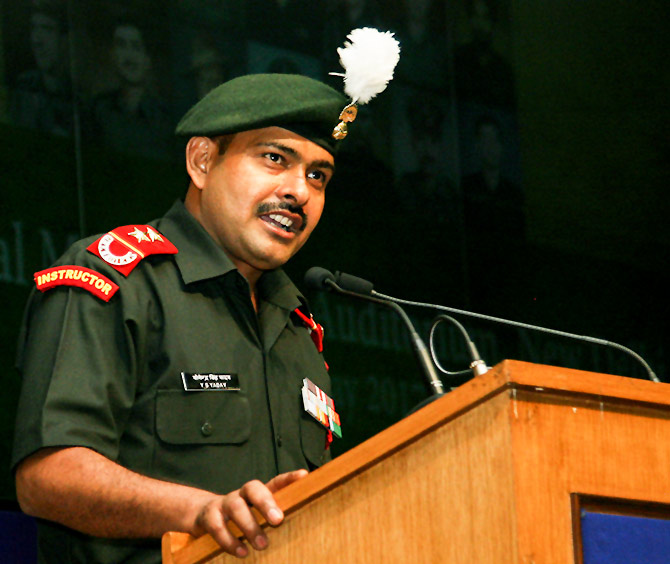 IMAGE: During the Kargil War, Subedar Yogendra Yadav, Param Vir Chakra, despite being hit by three bullets in his groin and shoulder, climbed a steep cliff and lobbed a grenade, killing four Pakistani soldiers and neutralising enemy fire.
His actions gave his platoon the opportunity to climb the cliff face.

While many will raise questions on the campaign or wonder what hanging a few portraits would do, all I would like to ask them is: Why do we then erect temples and churches? Why do we have the Tricolour? And why do we have the photographs of the President and prime minister displayed in government offices?

Symbols matter in our life. They have a role in shaping our personalities and reflecting our mindset.

The idea of portraits of our military heroes at educational institutions is the same -- to show that we care for those who protect and safeguard our nation.