News
Business
Movies
Sports
Cricket
Get Ahead
Money Tips
Shopping
Sign in  |  Create a Rediffmail account
Rediff.com  » News » Why our Parliament has such a woeful number of women 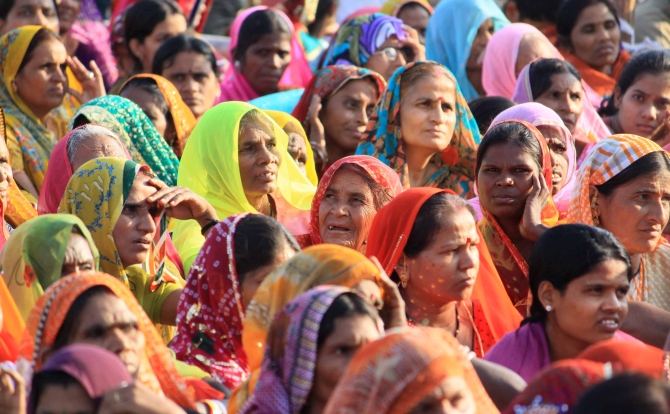 The perception that ‘winnability’ is based on gender is very strong, even though, if you break up the electoral success rate by sexes, the women who do win elections are proportionally far more successful than the men who win, given the huge number of men they have to beat, says Elina Kuusio.

It is all over bar the counting. The nine phases of the 2014 Lok Sabha elections are done. Figures available from the Election Commission of India show the total turnout of voters was a record-breaking 66.38 per cent of the electorate, which means that over the nine days of the election schedule, 55.13 crore (551.3 million) people stood in line at polling booths all over the country and pressed the button of their choice on electronic voting machines.

By the evening of May 16, 2014, India will know who will lead its new government at the Centre. Or, if the votes are too divided for a clear leader to emerge, have at least an inkling of what to expect over the next five years. Everyone, however politically apathetic they may be, expects change.

But one thing will not change, or at least not by a great extent. And that is the number of women among the elected members of Parliament in the Lok Sabha. Once the new government begins to function, 543 MPs will occupy seats in the Lok Sabha, but less than a hundred of them will be women.

It’s possible to know this already because of numbers. Women composed just eight per cent of all the candidates from all the political parties that contested the elections this time. That is, only 632 women ran for election, as opposed to 7,527 men.

In the last Lok Sabha that came into existence in 2009, there were 59 women MPs, meaning they occupied about 11 per cent of the seats. To maintain or beat these numbers in the 2014 elections, the women candidates, though wildly outnumbered, need to be more electorally successful than the men.

Is this proportional representation in the world’s largest democracy? Hardly.

You’d imagine that, at least in these elections, there would be more women candidates than ever before. Since a horrific gang rape in the national capital, New Delhi, in December 2012, women’s concerns about safety, sexual insecurity and gender discrimination have been in the media spotlight consistently, leading to discussions, arguments, introspection and a clearer picture of the strongly patriarchal society that is India.

The fact that the ruling Congress party lost the assembly elections in New Delhi in 2013 can be partly attributed to the way it behaved after the December 2012 gang rape: these issues motivated a good proportion of the female electorate to go out and vote. And women compose half the population of the country. So how come political parties didn’t think it important to nominate and support more women candidates?

This is because women are not seen as winners, according to a study by Dr Carole Spary of the University of York, England. In a paper titled ‘Women Candidates and Party Nomination Trends in India – Evidence from the 2009 General Election’, she writes that political parties in India tend to see women as less likely to win elections than men, and therefore prefer not to take risks with seats they could conceivably win.

The perception that ‘winnability’ is based on gender is very strong, even though, if you break up the electoral success rate by sexes, the women who do win elections are proportionally far more successful than the men who win, given the huge number of men they have to beat.

The 2009 general election, which made 59 women members of Parliament, was a record-breaker as far as women’s representation was concerned. Before that, women tended to occupy about eight to nine per cent of the Lok Sabha’s seats. But the fact that more women got to Parliament in 2009 did not mean that political parties nominated more women in 2009. It was just that more women beat more men. So it is fairly clear that political parties continue to lack faith in women as winners, which makes it difficult for women to participate in politics at all.

Add to this the fact that, compared to men, women are less likely to stand for elections as independent candidates (in the 2009 elections, slightly more than a third of female candidates ran as independents while nearly half the male candidates did the same) for various reasons including a lack of finances for an effective campaign, and you begin to see why there aren’t many more women in the electoral field.

It’s true that India is not the only nation with such a low proportion of women among its popularly elected legislators. In the West, even countries with far longer and deeper traditions of democracy and gender equality are struggling to deal with the same problem, so you could argue that a democracy that is still less than 70 years old is not doing too badly.

While the proportion of women in the Lok Sabha was 11 per cent at its best so far, in the US House of Representatives, it was 18.3 per cent, and in the United Kingdom’s House of Commons at this time, it is 22.6 per cent. These proportions remain about the same in the upper houses of India, the USA and the UK’s legislative bodies.

But comparisons are meaningless -- just because one nation does better or worse than another, it does not mean that that nation does not have a problem.

And the problem with women’s participation in politics in India has much to do with the country’s patriarchal attitude. In 2014, male children are still preferred and though prenatal sex determination was banned in 1996, female foetuses are still aborted in high numbers, and girl children who are born tend to be given poorer care than boys. This attitude is so deeply rooted that according to the 2011 census, India now has 37 million fewer women than men (586.5 million women to 623.7 million men).

A good indication of how little regard girls tend to get in India is the literacy rate. For men, the literacy rate is 76 per cent, but only 54 per cent of women are literate, and this means their opportunities are limited.

All these issues and more have been in the media spotlight since the gang rape in Delhi in December 2012. But even though sexual violence and the state of women's safety in Delhi was one of the reasons why the ruling Congress party was wiped out in the assembly elections last December, public anger over the lack of safety for women does not seem to have a national resonance yet.

Even many women, the victims of patriarchy, seem not to understand the insidiousness of the social system, as India learned when Asha Mirje, a politician from the Nationalist Congress Party and a member of the National Women’s Commission, said at the beginning of this year that the victims of gang rapes might have invited the attacks with their clothes, behaviour and their presence at inappropriate places.

So it seems unlikely that the change that is demanded in these Lok Sabha elections will include much-needed change for women in India.

But what of the future?

In 1947, after Independence, India became a democracy and, unlike many post-colonial states, has managed to stay a democracy so far. So the women of the nation still have hope. And it isn’t a weak hope. The way the public spontaneously mobilised itself against the establishment after the December 2012 gang rape in Delhi; the way the media took up the gang rape case and forced politicians and the establishment to address women’s concerns, show that women’s voices can and will be heard. So in the future, there could be many more women in Parliament.

Having more women in the Lok Sabha would not necessarily eliminate all the issues that the women of India face every day. But it would show half the nation that the other half of the nation is capable of being leaders, politicians and role models. 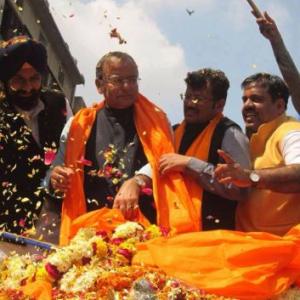 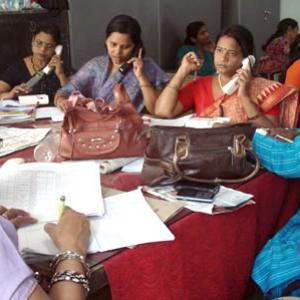