India's big cities are rotting, growing into massive, self-governing slums. When attempts are made to fix them, coral comes in the way, like in Mumbai, points out Shekhar Gupta. The latest data from global agencies reminds us that 15 of the 20 most polluted cities are in India.

Given how rapidly we are worsening, and urbanising, it is a matter of time when we count, maybe, 25 of the dirtiest 30, and so on.

Traffic in our cities crawls. In Mumbai, it is now at 8 kmph.

My suggestion to Google Maps: Rename it 'Waterloo', its own, of course.

Hyderabad may be a bit better, Kolkata even improving, which is a gift of its economic decline.

Delhi will not catch up with Mumbai or Bengaluru soon, but is a work in progress.

Particularly if you are commuting to its twin 'downtown' of Gurugram and Noida.

In these biggest metros, Delhi-Mumbai-Kolkata-Bengaluru-Hyderabad more than 90 million people live.

For ease of understanding, since New Zealand is the new liberal El Dorado right now, it is equal to about 20 times the wonderful nation, which gave us icons like Jacinda Ardern and Kane Williamson.

And, 150 times that of Luxembourg.

Why I bring in that tiny jewel of Europe I shall let you know soon.

Nearly 50 per cent of Mumbai's population live in slums or semi-slums.

Kolkata is no better and Bengaluru is making rapid progress.

No other city in India, not even that planned sarkari Utopia Chandigarh, is without slums.

What is slum in Mumbai is usually an unauthorised or illegal colony in Delhi.

The quality of life may not be as abysmal as in Mumbai, but isn't much better either.

In any case, about the same population of Kane Williamson's country lives as "illegals" in our national capital.

Our public hospitals, medical care, and education are rotting, overcrowded, and either of sub-Saharan quality or demand Harvard-level scores -- check out cut-offs in top "public" colleges in Delhi.

If our cities are so bad, why do millions still keep leaving their supposedly more virtuous villages and moving to the cities? Because our villages, too, suck.

On practically every parameter except air quality, they would be worse than the cities.

India may have become the fifth or even third-largest economy in the world, but our mindset towards our cities is still conditioned by one of the great Gandhian hypocrisies we have perpetuated -- the cities are evil, villages virtuous.

We've all heard in some context that famous old exchange where Ambedkar apparently responded to Gandhi saying India lives in its villages, by asking: But must it continue to do so forever?

The Union cabinet has always had a rural development ministry.

But, for nearly five decades after independence, we didn't quite have a ministry of urban development.

The "India lives in its villages" romanticism endures, to the great detriment of India's cities, their poor, and at zero benefit to the villages.

Or millions wouldn't be fleeing them.

Even during the tenure of APJ Abdul Kalam in Rashtrapati Bhavan, the mythology was furthered by an idea called PURA, or Providing Urban Amenities in Rural Areas.

Everyone applauded his power point presentations on this, and sniggered on the side.

First of all, an Indian village simply did not have the scale or economics to build urban-level infrastructure.

Especially as the political class is unwilling to charge the rural Indian for water, power, or any other utilities.

And then, what urban facilities was he talking about when our cities are such a disaster?

This mindset has had deeply damaging and far-reaching consequences.

Because we think cities are evil and villages are virtuous, Indian cities are never planned.

They grow into massive, self-governing slums, along with islands created by individual builders, "audacious" real estate entrepreneurs, and mafias who can work the system.

Our cities therefore grow without infrastructure.

Then the millions living there need water, power, roads, rail, and metros, and you have to dig underneath them, build above, or go over the seas.

Yet, millions of cars and two-wheelers have no place to park except sidewalks (where they exist) and public spaces, usually blocking entire roads.

It isn't just the poor that are victims of this.

Check out the fancy Worli-Parel development in Mumbai.

Scores of fancy apartment -- and business-towers have come up in the past two decades, mostly on lands of old textile mills.

But most have built their infrastructure, from water to parking to security.

They nestle in the middle of old, much poorer populations native to the area, deprived of such comforts.

This makes for a very unequal neighbourhood, not just in terms of economic status but also what the state or a city should give equally to all its residents.

Or you can go to the fanciest buildings in Gurugram.

They all float on their individual, giant septic tanks and diesel reservoirs -- the first because nobody ever bothered laying down a sewer system for India's fanciest new post-reform development, and the second because nobody trusts state power utilities.

You want to know how ridiculous this is?

You'd remember a phase of labour unrest at the Maruti factory a few years ago when unions and activists alleged that a large number of workers had been killed by the police, and their bodies were thrown into the gutter and sewer.

The chief minister asserted, in confident, self-righteous defence, that it had to be a lie because no sewer has ever been built in this Gurugram.

This column is provoked (or triggered, which millennials prefer) by the Bombay high court order stopping work on Mumbai's long-delayed coastal road project.

The 219-page order written by Chief Justice Pradeep Nandrajog and Justice N M Jamdar is among the best-crafted and comprehensible judgments I have read in some time.

The judges have spoken sense on there being no conflict between the environment and development, and the need for balance and adherence to laws.

They have struck down the project not on grounds of feasibility or environmental damage but on a technicality.

The project, they say, got its clearance as a road.

But it involves reclaiming 90 hectares (about 9.9 million square feet) from the sea.

It is, therefore, a building project, never mind that the reclaimed land is to be used only for public spaces like parks, cycle and jogging tracks, and bus parking.

So, the government can come back for clearances again, but as a city development project.

You can't grudge the activists their celebrations.

Read the judgment carefully, however, and you may cry.

I cannot fault it on law.

I only highlight a point where the judges say the project also needs wildlife clearance.

Because the petitioners said coral along the coastline will be destroyed.

Studies -- presented in the court -- have indeed shown coral near Haji Ali and Worli: All of two patches of 0.251 and 0.11 square metres, respectively, or about 4 square feet in all.

The fact is, the project will ultimately be built -- a year later and a Rs 10 billion costlier.

I am not sure the coral would survive, though I'd hope it does -- because people, in the condominiums and slums, can wait.

Activists can savour victory until then.

Or, remember one of the arguments advanced in favour of free rides for women in Delhi Metro and buses: Luxembourg has done it.

As long as we have our Luxembourg and "4 square feet of coral are better than 20 million humans" fantasies, our cities will rot.

And millions will still keep flocking to them from even more rotten villages. 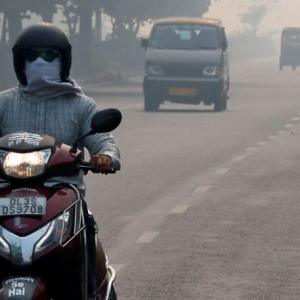