By Jyoti Malhotra
August 10, 2012 11:11 IST
The Congress and the Bharatiya Janata Party must understand the importance of the east, says Jyoti Malhotra

For a country that believes it is destined to at least be a regional power, both of India's major political parties seem to be doing everything in their capacity to destroy what has always been a special relationship -- with Bangladesh.

First, it was the Congress party that, unable to stand up to the tantrums of West Bengal Chief Minister Mamata Banerjee, threw away with both hands the Centre's right to making India's foreign policy. Prime Minister Manmohan Singh's lack of political courage was amply clear in Dhaka last September when he backtracked from signing the Teesta waters agreement with Bangladesh Prime Minister and Awami League leader Sheikh Hasina.

For a country that went to war with another country so as to rescue the Awami League -- one of whose heroes at the time was none other than Sheikh Hasina's father -- this was the first step on the slippery slope. But the Congress party put the relationship with its very special eastern neighbour on the line because it was worried that a recalcitrant ally may just topple the apple cart and the government with it.

At stake was the revamping of India's entire east and north-east. Sheikh Hasina had already promised, in exchange for the Teesta agreement, to allow India to transit goods and, over time, personnel through Bangladeshi territory and connect with India's northeastern states. Moreover, India would have been given the right to use the Chittagong port on the subcontinent's eastern flank.

For the first time since 1947, when it lost eastern Bengal to Pakistan, Sheikh Hasina was offering India the chance to return honourably to the region. The Land Boundary Agreement -- which finally measured each square inch of the remaining 8 km or so of un-demarcated boundary and adjusted both adverse possessions and enclaves, all of it amounting to a 100 acres or so -- was supposed to be the icing on the cake. This agreement survived the disaster crash of the Teesta accord last September.

However, for it to enter into force, it needs to be ratified by a two-thirds majority in Parliament, present and voting, as well as by the legislative assemblies of all the states that touch Bangladesh. This means West Bengal must also say yes.

For nearly a year, Banerjee has held the Congress party hostage to its own fears. For nearly a year, Singh's Congress put Sheikh Hasina on the back foot within her own party, not to mention the massive loss of face she suffered in the country. All this because she trusted India. Finally, after a year, the Congress was said to be gathering the courage to ratify the LBA during this monsoon session of Parliament, knowing well that this was one of those last chances it would get to retrieve itself. Briefings for leaders of opposition parties have been lined up. In the Rajya Sabha, where the Congress and its allies are in minority, the Congress needs the Bharatiya Janata Party to come on board if the LBA has to be ratified.

So, what happens on the first day of the monsoon session of Parliament? The BJP's senior-most and most experienced leader, LK Advani, not only drew first blood by calling the Congress government an "illegitimate" one -- which remarks he subsequently withdrew -- but in a discussion on the Kokrajhar violence in Assam, returned to using the same old dangerously chauvinist rhetoric against Bangladeshis that used to be employed by the BJP in the bad old days.

Describing the riots between Bodo tribals and Bengali-speaking migrants in Assam as the "greatest failure" of the United Progressive Alliance, Advani said the Assamese had become "refugees in their own state".

The Congress had encouraged illegal immigration from Bangladesh for decades, for vote-bank politics, he said. In some places in Assam, there are so many illegal immigrants that it wouldn't be surprising if someone claimed it to be a part of Bangladesh. The illegal and unabated infiltration from Bangladesh was a serious failure and grave crisis in national security. All those Bangladeshis who had come illegally should be first disenfranchised and then deported, he added.

With the tone and tenor against Bangladeshis -- admittedly, several thousands of them illegal immigrants, many of whom leave their home and hearth to look for economic security in neighbouring India -- set on the first day of the monsoon session of Parliament by the BJP, what chance does the LBA have of passage?

Unless the prime minister reaches out to key leaders of all the opposition parties, especially the BJP, and talks to them about the overwhelming importance of securing Bangladesh and keeping it within India's sphere of influence, the eastern neighbour could be lost very soon. No prizes for guessing who is waiting in the wings to move in. The Chinese have already offered Bangladesh $2 billion to build a bridge over the Padma river after the World Bank recently pulled out.

In fact, Delhi's other initiatives in Bangladesh, such as a free trade agreement, are in danger of being buried. Even the most pro-Indian Bangladeshis in the Awami League are now saying an FTA is a one-sided move and Dhaka cannot sign it.

Singh must use this monsoon session to recover lost foreign policy ground. He must show the honourable Mr Advani that driving a key neighbour into a corner is not the best way to focus attention on the mess at home. At least with Bangladesh, this could be one of his last chances to do so.
Get Rediff News delivered into your Inbox.
Jyoti Malhotra
Source: 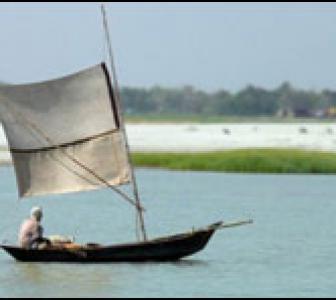 Coal mining DESTROYING 1.1 mn hectares of forests!
My views on Pak are personal, not of govt: Bangla envoy