'There is a problem with the rise of a popular view that sees Kashmir through the prism of the larger, chronic Hindu-Muslim tensions.'
'By redefining the Kashmir problem simplistically in Hindu-Muslim terms we could end up keeping Kashmir, but losing most Kashmiris,' says Shekhar Gupta.

Let's get some of the least contestable facts out of the way. First, the current phase of troubles started with the security forces killing Burhan Wani, which was an inevitability.

From the day he picked up arms against the State and began preening on social media, he was a dead (if very young) man walking. That he survived so long is a marvel of his luck, and also skills. Usually, you won't survive more than a year after making it to the armed forces' 'A' list of wanted men.

Do I have sympathy for him? I'd grieve for any dead countryman, but I'd sympathise with him only to the extent that he was allowed, probably even encouraged, to take such a disastrous path by friends and family.

Even the manner of his killing is irrelevant. Once you take to arms and start killing, to complain about being killed extra-judicially would be chutzpah.

Sad, therefore, that a fellow Indian had to die this way, but it was a death he chose. It's sadder that he took dozens more, civilians and in uniform, with him.

The next incontestable fact for me, and a very vast majority of fellow Indians, including, I dare say, on Jawaharlal Nehru Campus campus, is that Kashmir, or more specifically the parts that are today in India shall (and must) remain an inalienable and inseparable part of the Republic.

Similarly, what is with Pakistan will remain theirs, never mind the unanimous Parliament resolutions to recover all of Pakistan- and China-occupied Kashmir. Three nuclear-armed neighbours can't be snatching territory from each other through war.

Kashmir and Kashmiris are caught in a deadly blood feud among the three of them. None will blink. Even if a dozen new wars are fought and India and Pakistan vaporise each other with their crude nukes, one side won't lose 'its' Kashmir to the other.

Pakistani talk of 'Azad Kashmir,' plebiscite and backing of azaadi is the greatest fraud played on the Kashmiris.

Even the United Nations Security Council resolutions only offered a choice of India or Pakistan. There is no azaadi, no Scotland, no Quebec, not even a Brexit. In any case, it was Pakistan, not India, that buried the UN resolutions, not with the Simla Agreement but seven years earlier in 1965 when it tried to take Kashmir militarily and failed completely.

We Indians, therefore, have to never worry about losing our Kashmir. The army and our national resolve is steely enough to protect this part of our territory.

'Our' Kashmiris are a different matter. Armies can protect territories and citizens. They can't change angry people's minds. They can get compliance and reasonably good behaviour. I know this will be contested by my many honourable soldier friends at once, but armies cannot win hearts and minds among a humiliated population.

You want to thwart the enemy, use the army. You want to win back an estranged brother, bare a great big heart.

Remember the dramatic change Atal Bihari Vajpayee brought about with just that one line, invoking 'insaniyat' (humanity) in place of just the Constitution. It brought us a six-year period of great calm as Manmohan Singh built on it.

We had presumed that's exactly where Narendra Modi was headed as his Bharatiya Janata Party joined the most unlikely of all coalitions in our history, with Mufti Mohammad Sayeed's Peoples Democratic Party. Then the initiative lost its way.

One reason things fell apart is that BJP didn't evangelise the idea adequately to its ranks, and more importantly its intellectual/ideological agenda-setters. This coalition was expected to be statesmanly peace-seeking rather than a hypocritical pursuit of power because two ideologically adversarial forces with a nationalist core came together to reunite what an election had divided, ushering in the equivalent of the two-nation theory.

While Prime Minister Modi has taken a big risk with the alliance, the contradiction between his party ranks' ideology and his big-picture politics has set him back. You can see it every evening as the BJP's prime-time warriors descend on television studios, justifying security forces' actions, without a word of sympathy, even stupid old pity, for the Kashmiris who obviously get what 'they asked for.' Or even faking an expression of confidence in their ally.

It's a bizarre way to help your own coalition partner and a most morbid way of declaring open season on a section of 'our own people.'

The repeated emphasis on our own people is deliberate. At some point all of our ultra-nationalist, 'Kashmir hamara hai, saare ka saara hai' chest-thumpers need to ask themselves if the passion Kashmir evokes in their hearts is about its land, a blood feud with Pakistan, or also its people?

Is it only about its kind and its 'loyal' (Hindu and Buddhist) sections and the Muslims can go to Pakistan if they so wish?

If this is your view, you are fully echoing what the Pakistanis say non-stop: That Kashmir is a part of the unfinished agenda of Partition. They want the land and some people (Muslims), we also want the land and the rest of the people.

The British taught us divide and rule. We are practising divide and lose.

Almost 97 per cent of our Muslims live in the mainland. They have never made common cause with Kashmiris, who they see as a really pampered enfant terrible. Even ideologues of the new Sunni right, notably Zakir Naik, have been extremely cautious on Kashmir. This has helped the government keep the issue confined to the Valley.

The army is a truly secular institution and even if there are excesses, you won't hear a soldier, senior or junior, say anything communally loaded or offensive. It is the one institution the insecure minorities, particularly the Muslims, trust with their lives during riots.

There is a problem now with the rise of a popular view that sees Kashmir through the prism of the larger, chronic Hindu-Muslim tensions.

Look at it this way. What will happen if India were to tell all its Muslims, the borders are open, those who prefer Pakistan can go. None would leave from the mainland, I suspect, although a lot of Muslims may come in seeking better lives from Pakistan and Bangladesh. Because economics, and political stability are greater determinants of where you want to be, provided you have the basic Constitutional and religious freedoms.

What will happen across our borders in Kashmir is an intriguing question. I would wager an overwhelmingly large majority would stay put here, barring a few tempted by romanticism of azaadi or enticed by Inter Services Intelligence's jihadists.

We need to, therefore, ask a more loaded question: Is this what the rising new force of Hindu ultra-nationalists want: Would we rather that 'our Kashmiris' stay here with 'their' land, or carry on to Pakistan leaving 'our' land behind?

My intention was not to seek an honest answer to this, but to flag the perils of redefining the Kashmir problem simplistically in Hindu-Muslim terms, where we could end up keeping Kashmir but losing most Kashmiris. 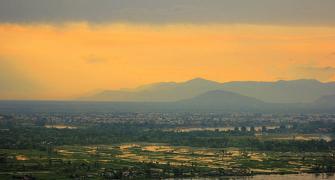 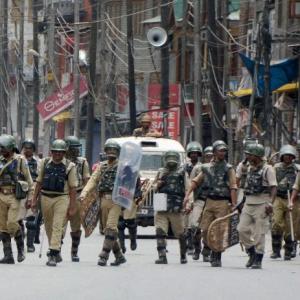