Is UGC the new caged parrot?

'"Life-changing" clearly denotes an exceptionally high level of regard for Narendra D Modi.'
'One has to find out if the UGC used such an adulatory term for any other speaker, whether from politics or from academe,' says Amulya Ganguli.
Illustration: Uttam Ghosh/Rediff.com 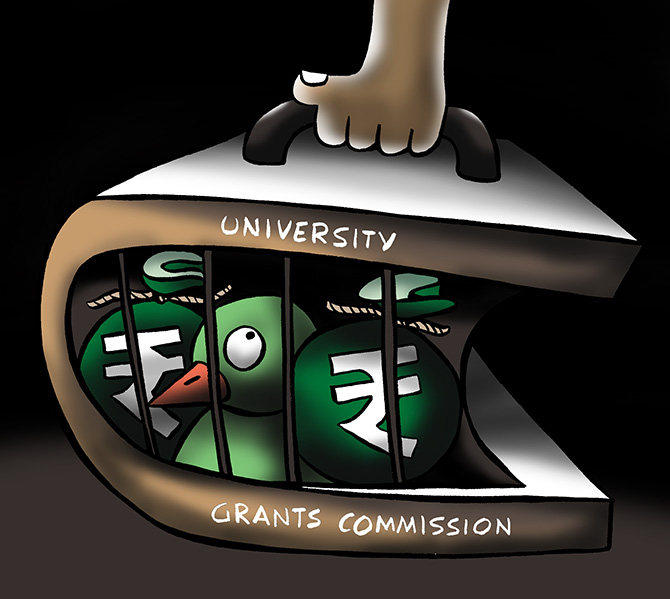 The BJP should be pleased that it has acquired a new caged parrot in addition to what the party already had from the days of its predecessor -- the CBI.

The ruling party's new pet is the University Grants Commission, UGC, a supposedly autonomous body which is entrusted with the responsibility of disbursing funds to universities and maintaining academic standards.

There is nothing in its charter, however, which says it can act as the government's or the ruling party's publicist.

That job has to be performed by the Press Information Bureau or the BJP president's office.

The UGC's decision to call upon all educational institutions to provide adequate facilities in the campuses so that the students and teachers could hear what the commission described as a 'life-changing' speech by the prime minister was rather odd.

The decision was undoubtedly taken on its own with probably a little prodding from the Union human resource development ministry.

Whether the phrase 'life-changing' was the UGC's own or was supplied by the HRD ministry is not known.

But it clearly denotes an exceptionally high level of regard for Narendra D Modi.

One has to leaf through archival material to find out whether the UGC used such an adulatory term for any other speaker, whether from the field of politics or from the groves of academe.

The occasion for the prime minister's peroration on September 11 which was expected to transform the lives of listeners was the centenary of Deen Dayal Upadhyay's birth and the 125th anniversary of Swami Vivekananda's address to the world parliament of religions in Chicago.

Would the prime minister refer to one of Vivekananda's famous sayings -- 'I see in my mind's eye the future perfect India rising out of this chaos and strife, glorious and invincible, with Vedanta mind and Islam body'?

Or would he give it a twist, as one of Modi's followers has done, by suggesting that what the famous monk really wanted was a Vedantic mind in a Muslim body for all.

However, as this has not happened with the Muslims retaining their own mind, the prime minister's follower has gone on to interpret Vivekananda's observation to claim that the outcome may well be an instance of a Muslim mind in a Hindu body, which will mean that the Hindus will become Semitic.

Cynics will say this can be said to have already happened in view of the Hindutva lobby's preference for a society governed by the Semitic concept of one religion and culture playing a dominant role.

As is known, the idea of cultural nationalism -- one people, one nation, one culture -- is the essence of Hindutva.

But that is another matter.

What was relevant was whether Vivekananda's views would be propagated without distortion and to what extent Deen Dayal Upadhyay's views would change the lives of the audience.

The latter, of course, is quintessentially saffron. Coming from the Hindi-Hindu-Hindustan gharana of the cow belt, his opinions should be of considerable interest to non-vegetarians.

Upadhyay has said, for instance, that the 'nation... derives its existence from the spiritual traditions and faiths which alone pour life and vivacity into its limbs.'

'And the cow forms not only the centre of the national mind but she permeates through our entire existence like Brahma.'

The equation of the cow with virtually the Almighty -- Brahma -- and the human soul since it 'permeates through our entire existence' is undoubtedly the most exalted appellation that has ever been given to the humble animal.

For many, the acceptance of this view in its totality may well prove to be life-changing.

For the UGC, it may entail a relook at the syllabi of both science and philosophy in order to incorporate Upadhyay's views.

However, a section in the commission may wonder whether it is always wise to abide by the HRD ministry's diktats.