News
Business
Movies
Sports
Cricket
Get Ahead
Money Tips
Shopping
Sign in  |  Create a Rediffmail account
Rediff.com  » News » Is This The India We Want?

'The involvement of policemen in either committing the crime or shielding the accused in Kathua and Unna points to a crumbling civil and moral order,' says Amulya Ganguli.
Illustration: Uttam Ghosh/Rediff.com 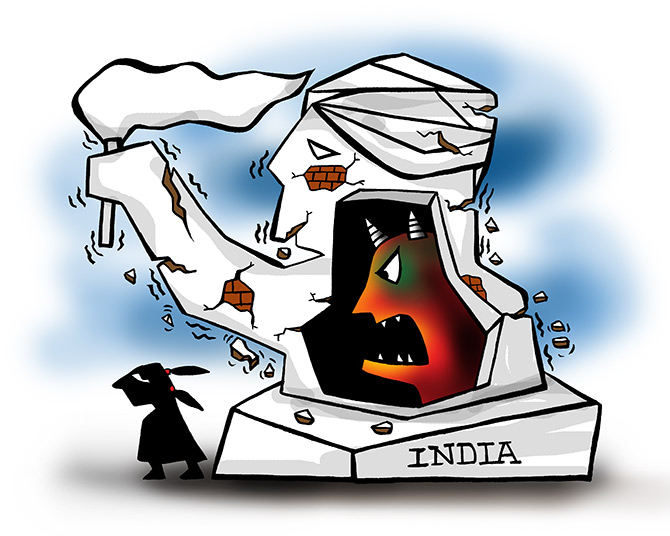 Perhaps for the first time in India, or anywhere else in the world, three legislators of a ruling party have had to pay the price for their dubious role in the most heinous of crimes, the rape of minors.

Two of them, who were ministers in Jammu and Kashmir, have had to resign three months after an eight-year-old girl was raped and murdered in Kathua.

They had been 'misled', according to a BJP spokesperson, into supporting the accused to the accompaniment of patriotic slogans while the third legislator has been arrested in Uttar Pradesh after considerable delay in connection with the rape of a 17-year-old girl in Unnao.

Normally, those associated with a political party face charges of corruption or of inciting communal or caste-related violence.

Considering that 186 of 541 MPs, or 34 per cent, have criminal antecedents, it is not surprising that Indian politicians have to spend as much time in fighting legal battles as working for the country's vikas.

If the number of MPs and MLAs are taken together, then the percentage rises to 36 with 1,765 legislators at the national and state levels out of a total of 4,896 facing criminal charges.

But sleaze and fuelling communal or caste animosity are not the only crimes of which the politicians are accused.

They have also been charged with murder, kidnapping, arson and banditry.

However, there are not too many rape cases, especially of minors.

Now, unfortunately, this lacuna is being filled.

As the Kathua and Unnao rape cases show, the involvement of politicians can be both direct and indirect.

In the Kathua case, it was indirect in the sense that the two BJP ministers of the Mehbooba Mufti government had addressed a rally in support of the alleged rapists, who included policemen.

However, if they were 'misled' in this regard, the reason probably was, as a BJP MP has said, the crime was a Pakistani conspiracy and the Hindus (who are the accused while the child was a Muslim) could not have had anything to do with it since they comprise a mere one per cent of the state's population and live in fear.

Notwithstanding insightful explanations of this nature, their resignations have followed the apparent realisation among the BJP top brass that the growing public outrage over the two rapes could damage the party's electoral prospects.

Moreover, in the age of the Internet, the horrible crime in Kathua has led to world-wide condemnation with United Nations Secretary-General Antonio Guterres calling for the guilty to be brought to justice.

In the Unnao case, the accused MLA has been arrested, but by the CBI and not the police, who called him mananiya vidhyakji (honorable legislator) at during a press briefing while the legislator, claiming innocence, was roaming free.

The deferential behaviour of Chief Minister Ajay Singh Bisht's police towards the accused is understandable because of the latter's clout.

As the Allahabad high court said, 'the disturbing feature of the case is that the law and order machinery and government officials were directly in league (with) and under the influence' of the suspect.

The involvement of policemen in either committing the crime or shielding the accused in Kathua and Unna points to a crumbling civil and moral order.

The BJP's initial reaction to the Opposition's protests on the Kathua horror was to say that the non-BJP parties were prone to crying 'wolf' at the slightest opportunity, whether chanting 'minority, minority' at one time or 'Dalit, Dalit' at another and 'women, women' on the third occasion.

But rapes, especially of children and adolescents, can have a traumatising impact on ordinary people.

This is all the more so if the offence is accompanied by mind-numbing brutality as in the Kathua case where a person was called in from Meerut to 'satisfy his lust' and the killing of the girl was delayed till another person could rape her one last time.

The BJP's question as to why the Congress did not organise candlelight marches when crimes were committed against women during the 1984 anti-Sikh riots or when a girl was recently raped and burnt alive in Assam is palpably an evasive tactic.

In advancing such arguments, including the Pakistani conspiracy charge, the BJP is demonstrating its nervousness over the realisation that the Opposition has found yet another issue -- apart from 'minority, minority', 'Dalit, Dalit' and 'women, women' -- which can have wide resonance.

There is little doubt that the otherwise surefooted BJP has been stumbling badly of late.