If there is a lesson to be learnt from the 1980s, it is that mobocracy never works.
And a government that yields before public protests will have ceded its right to govern, says Syed Firdaus Ashraf. 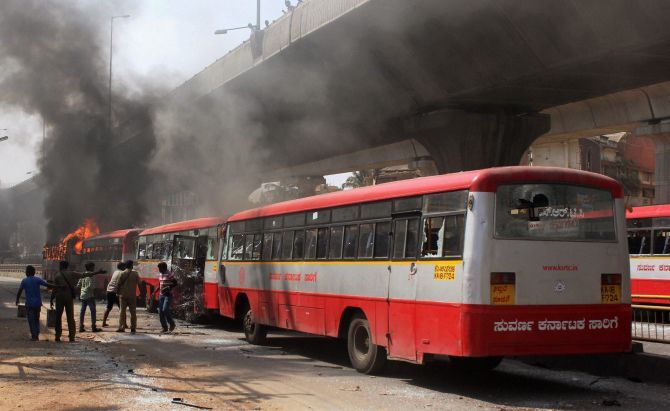 On March 25, 2015, I was part of a peaceful protest organised at Mumbai's Azad Maidan against the Maharashtra government's ban on beef.

The rally was organised by traders who deal in beef and, mind you, all of us in the protest march knew it was not the cow that was being slaughtered, but bulls and oxen which had hitherto been allowed.

But with President Pranab Mukherjee granting assent to a 20-year-old bill moved by the then Bharatiya Janata Party-Shiv Sena government in Maharashtra bringing the progeny of cows under the beef ban, one fine day not only were people suddenly deprived of their meat, traders and butchers were denied a livelihood.

Given the strength of the sentiment against the ban, I expected at least 100,000 people to turn up for the protest and was shocked when not more than 5,000 people turned up for the peaceful morcha.

Obviously, the protest created not a ripple anywhere.

Who cares in the BJP, in power at the Centre and in Maharashtra, unless you are part of the party's vote bank or part of a violent mob which can bring a city to a halt? Like the Patels are currently doing in Mehsana?

Don't get me wrong. I am not at all in favour of violence as a form of protest. I condemn violence in all forms by whoever it is perpetrated for whatever reason. I am merely making an observation as to what gets results under the Modi government.

Tuesday, April 19, evening, the citizens of Bengaluru were taken aback to see their city held to ransom by workers of textile and garment factories.

The workers were demanding that the Modi government withdraw the controversial changes to Provident Fund rules that were introduced in this year's Budget.

According to the new provisions, no worker could withdraw the employer's share of the Provident Fund corpus till s/he reaches the age of 58.

There had been other changes proposed as well, but given the extent of public anger against the measures, most of the changes had been rolled back. The remaining ones were to kick in from May 1, even though they remained unpopular. But so far outrage had been confined to television studios, social media and newspaper columns.

Till the Bengaluru workers, deeply upset at the government telling them how and when they should access their hard-earned money, decided to take things into their own hands.

And Bengaluru saw the consequences when public property was destroyed. The mob that did it was violent and faceless, no one knew who was behind the arson and destruction, who was leading them.

The union leader told me it was not done by them, but by lumpen elements.

Earlier in the day, the government had pushed back the date of implementation of the new PF rules by three months. By the evening, in the face of the violence in the Garden City, the Modi government realised the situation could spiral out of control and put the decision in abeyance.

Union Labour Minister Bandaru Dattatreya announced a rollback, but no reason was given either by him or Finance Minister Arun Jaitley.

But this is the Modi government which believes you don't need to explain anything to anyone. Accept what it says and if you don't, you are anti-national anyway.

This was not the first time this government has buckled under in the face of popular protests. There was Facebook's Free Basics which Mark Zuckerberg was very keen on introducing in India. And the government, it seemed, inclined to let it happen.

But that was only till supporters of net neutrality kicked up a storm of protests online, contending how Free Basics went against the principles of net neutrality. The momentum was kept going by faceless thousands who questioned the government's intentions.

Their fear was not unfounded. After all, Prime Minister Narendra Modi had met Zuckerberg at Facebook's headquarters and held a town hall there. The bonhomie between the two men was there for all to see.

The proponents of net neutrality didn't want the internet to be compartmentalised, and the campaign quickly morphed into a 'Save the Internet' movement.

The government saw the momentum slipping from it and decided that going with Free Basics would backfire on it and backed net neutrality.

If that change was wrought in a civil manner, the Jat reservation riots in Haryana exposed the vulnerability of the BJP government to public rage.

Faceless mobs took to the streets to burn and loot shops demanding reservations in jobs and education. Business in Haryana came to a halt as top-notch MNCs located there were stunned by the anarchy around them. The Manohar Lal Khattar government in Haryana, it seemed, had abdicated for a few days.

In just one week property worth Rs 34,000 crores (Rs 340 billion) was destroyed, and the Khattar government had to call in the Indian Army to control the situation.

Finally, the Khattar government yielded to the Jat community's demands, in spite of the fact that the Supreme Court had rejected reservations for Jats in March 2014.

That was what the power of the mob can do, make governments overturn even court orders.

We had seen it happen before, with disastrous consequences, where the government of the day gave into street pressures and overturned a judicial order.

It was the mid-1980s, and Rajiv Gandhi's government, which had an unprecedented majority in the Lok Sabha, lost its nerve when 200,000 Muslims took to the streets.

The Supreme Court had delivered a verdict in the Shah Bano divorce case that her husband would need to pay Shah Bano alimony for life, reversing the provisions of Muslim personal law.

Orthodox Muslims felt this ruling was a threat to their religious rights which the courts had no right to interfere with.

During a visit to Mumbai by Rajiv Gandhi in 1985, 200,000 Muslims spilled on to the streets to protest against the Supreme Court order.

Shaken by the show of strength, the government overturned the verdict by enacting the Muslim Women (Protection of Rights on Divorce) Act, 1986.

The consequences were, of course, disastrous to the polity, and to India as a democracy, and we can sense it even today.

If there is a lesson to be learnt from those fraught days, it is that mobocracy never works. And a government that yields before public protests will have ceded its right to govern.

But then, I also saw in Mumbai's Azad Maidan how ineffectual a peaceful protest was. The Maharashtra beef ban still exists. 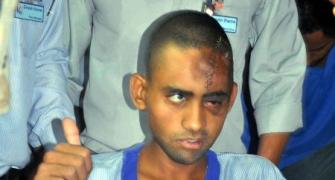 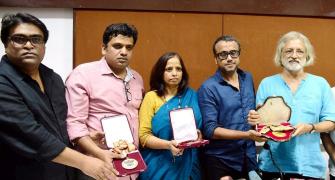