News
Business
Movies
Sports
Cricket
Get Ahead
Money Tips
Shopping
Sign in  |  Create a Rediffmail account
Rediff.com  » News » Is boarding an airline first the right way of honouring the soldier?

Is boarding an airline first the right way of honouring the soldier?

'The Indian soldier will fight where he is asked to, and he always has.'
'It is up to us as a democratic society to see that his service and sacrifice is for the most useful causes, and that we do not needlessly ask him to die for us.'
'That would be the single most important way in which we can honour him,' says Aakar Patel. 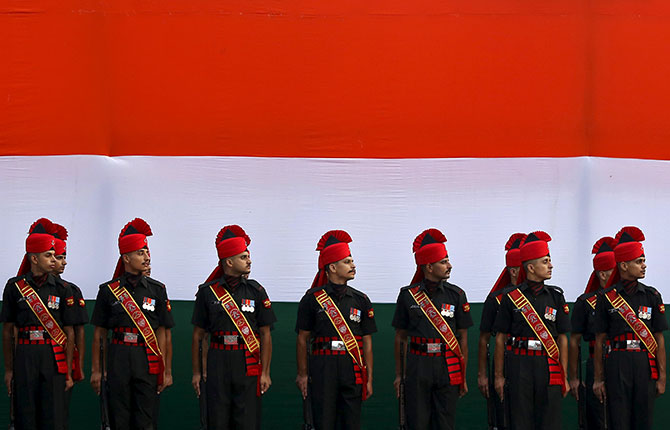 Air India, our national carrier, has decided to honour our soldiers through a gesture. Armed forces personnel will now be asked to board its planes first, before other passengers.

This gesture will make them feel special and is meant to honour their service, which is more meaningful than that of other Indians, whatever their achievement (and whatever the achievement of the individual soldier may have been). We should pause here briefly to question Air India's assumption.

Why is the service of the Indian teacher, the postman and the man delivering gas cylinders any less important? We assume that this is the case, but why?

We could argue that soldiers do a job that is dangerous. But then so again is the work of electricity linemen. The data shows that more Indians die cleaning our sewers and septic tanks than soldiers die in combat.

Those workers don't get medals and don't receive any honour or reward. In fact, they don't even receive their dues.

However, I don't want to dwell on that subject today. Let us assume that soldiers do the most important work of the Republic and so they are deserving of honour like nobody else is.

Is the government airline boarding protocol the right away of honouring the soldier? I would say no, and add that this gesture deliberately continues the honouring narrative, which is fake and loaded against the soldier. Let me explain.

There are several ways in which we can ensure that our military is given its rightful dues.

Air India would have honoured our soldiers better if it agreed to use its catering strength to help improve their food.

Second, we must ensure that our soldiers are physically and psychologically healthy. Frequent episodes of stressed out jawans killing their officers and fellow soldiers indicate that this may not be the case.

Unions and associations of former soldiers will testify to the fact that many of our warriors are unwell psychologically and get zero support or treatment.

So far as the pensions and job opportunities go, I have done some research on this subject and I can tell you that though we are a poor nation with few resources, soldiers get more from the State than any other category of government servant.

Fourth, serving soldiers who perform well must be honoured through rewards like medals and so on. A recent report has revealed that they do not get this.

A solider might be told that he has been awarded a medal, but he is not given the physical medal itself. He purchases a replica of this in the army canteen and wears it. I find this shameful.

The fifth and last way in which we can meaningfully honour our warriors is the most important one.

We should reduce the areas of conflict in which we have deployed our brave soldiers.

Why are they occupying Siachen, a barren landscape in which they die by the dozen every year? Not from enemy firing, but from the weather.

Can we not make some effort to talk to the Pakistan government and reduce troop presence on both sides in the Siachen, Saltoro area? We can, but only if we speak to Pakistan.

At the moment we have chosen to do kutty with them, which means we are okay with our soldiers continuing to die.

Internally, our army and paramilitaries face continous deployment in the north east, the Adivasi belt and in Jammu and Kashmir.

These are issues requiring political, not military solutions. Armed force has been tried for 70 years in these places and it has not produced favourable results.

If we insist that armed force is the only option, the price for that rigidity must continue to be paid by the jawan and the Indian citizen he is fighting against.

The Indian soldier will fight where he is asked to, and he always has.

It is up to us as a democratic society to see that his service and sacrifice is for the most useful causes, and that we do not needlessly ask him to die for us.

That would be the single most important way in which we can honour him.

Unfortunately, I do not see that happening. We are happy to honour him as long as he continues to die, often needlessly.

My guess is that Air India is doing chamchagiri to the nationalists in this atmosphere of militarism that the Modi government has built. It has already said it will only serve vegetarian food on local flights, and that will probably have pleased the RSS very much.

I don't have a problem with chamchagiri, and I suppose everyone does it.

But this sort of casual gesture reduces the real meaning of soldierly sacrifice and, even if it makes the government happy, evades the real issue.

IMAGE: Soldiers at a rehearsal for Independence Day at the Red Fort in Delhi a couple of years ago. Photograph: Adnan Abidi/Reuters 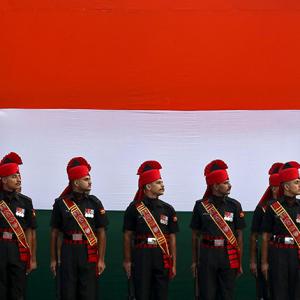