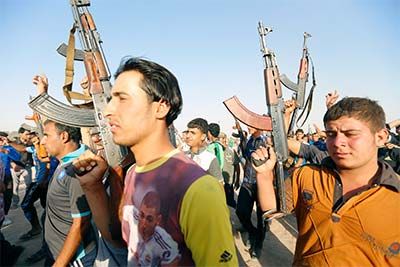 It is time to throw an outer ring around India's national security by proactively engaging in areas immediately outside our neighbourhood. Such a ring will not only insulate India from emerging threats, but also create new leverage in securing our own neighbourhood, says Nitin Pai.

To us in India, news that an Islamist militant group that even Al Qaeda considers too extremist has taken Mosul, Tikrit  and other Iraqi cities in a lightning campaign appears worrying, but rather remote. Many would react by blaming the United States for first wrongly invading Iraq and then wrongly leaving it in a mess. In the corridors of power, as in our public discourse, once something is classified as a "Middle East problem", it is quickly transferred from the busy "what should we do about it?" department to the articulately languid "how it is the fault of the United States/Israel/Saudi Arabia/British Empire" department.

Despite the parallel with how another bunch of Islamists similarly ran over Afghanistan in the mid-1990s (and how that turned out for us), it shouldn't surprise us if the rapid rise of the Islamic State in Iraq and the Levant is given a pass by India's strategic establishment. Ignoring the ISIL's trajectory would be an error: their hold might be limited to Mosul today, but their ambitions are not. Maps put out by pro-ISIL activists show them dreaming of world domination. One such map includes parts of northern and western India -- including a part of Gujarat -- in the Islamic province of Khorasan.

Everyone is entitled to their fantasies -- why deny the triumphalist ISIL militants that right? -- but if you find yourself included in the designs of an aggressive military force against your will, it is sensible to make some arrangements so that fantasies remain fantasies. It would, therefore, be prudent for New Delhi to move beyond "monitoring the situation closely" and begin to manage the risks.

For centuries, it used to be that our imperial court began debating what to do when the risks had already manifested themselves in the form of invading forces on the plains of Panipat. We are doing slightly better now: we start the debate when the invaders are on our borders. We should and can do better than that.

It is time to throw an outer ring around India's national security by proactively engaging in areas immediately outside our neighbourhood. Such a ring will not only insulate India from emerging threats, but also create new leverage in securing our own neighbourhood. The purpose of such a strategy should be to shape a balance of power that is favourably disposed to us.

We are already doing something similar in East Asia. It is this column's central argument that Indian presence and engagement east of the Strait of Malacca better equip us to negotiate with China and other regional countries, even on matters concerning the subcontinent and the Indian Ocean.

We should have done the same in West Asia 10 years ago. That was not to be because of the US's superpower-sized dogma against engaging with Iran, Mahmoud Ahmadinejad's grandstanding, and New Delhi's massive lack of imagination and initiative in trying to bring those two countries together. It is painfully obvious that India, Iran and the United States have common interests in the region, which contend with those of China, Saudi Arabia and Pakistan. Yet, while Washington used to work hard to prevent India and Iran from drawing closer, China invested heavily in locking up a tight triangular partnership with Saudi Arabia and Pakistan. Riyadh's closet nuclear arsenal has Pakistani-produced warheads on Chinese-made missiles. Enough is known about China's nuclear assistance to Pakistan to be recounted here.

Developments over the past year present an opportunity for New Delhi to attempt to create the outer ring in West Asia. The US is less dependent on Saudi Arabia for its oil and has opened up channels of talks with Iran. The rise of the ISIL has brought Washington and Iran the closest to military co-operation for the first time since 9/11. For its part, Iran fears being squeezed by radical Sunni regimes on two sides.

Any initiative by India in the West Asian region must take into account the country's interests with regard to Saudi Arabia, the Gulf Arab states and Israel. These are valuable in their own right. Given the complexity of their relationships with each other, and with the US and Iran, it won't be as easy for India to implement an outer ring in West Asia as it was in East Asia. That said, resignation risks taking us back to the 21st-century equivalent of fighting on the plains of Panipat.

How should we go about building the outer ring? New Delhi must officially reach out to Iran and Israel at the highest levels, and bring these relationships up to the levels India has with Saudi Arabia. This should be followed by sustained investment in diplomatic, intelligence and military capacity, in parallel with pursuing greater economic ties.

To be sure, the emergence of radical Islamist states in Iraq (and potentially in Afghanistan, if it goes the same way) is a problem for the whole world. That doesn't mean India will be unaffected. Furthermore, even if the problem itself spares us, the solution -- to the extent that it doesn't involve us -- might not.

Image: Volunteers, who have joined the Iraqi army to fight against predominantly Sunni militants from the radical Islamic State of Iraq and the Levant, carry weapons during a parade in the streets in Al-Fdhiliya district, eastern Baghdad on June 15, 2014. The insurgent offensive that has threatened to dismember Iraq spread to the northwest of the country on Sunday, when Sunni militants launched a dawn raid on a town close to the Syrian border, clashing with police and government forces. Photograph: Thaier Al-Sudani/Reuters. 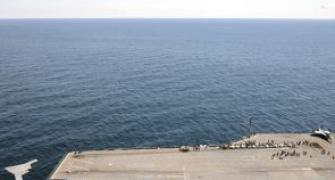 US orders aircraft carrier to Arabian Gulf over Iraq crisis 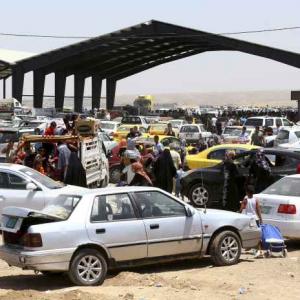 India issues advisory, asks all to avoid travel to Iraq 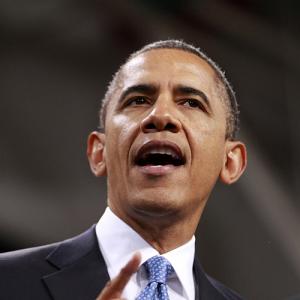