News
Business
Movies
Sports
Cricket
Get Ahead
Money Tips
Shopping
Sign in  |  Create a Rediffmail account
Rediff.com  » News » Indian democracy is in the fight of its life

'And if you think this is alarmist nonsense, you are helping it happen,' says Mitali Saran.
Illustration: Uttam Ghosh/Rediff.com 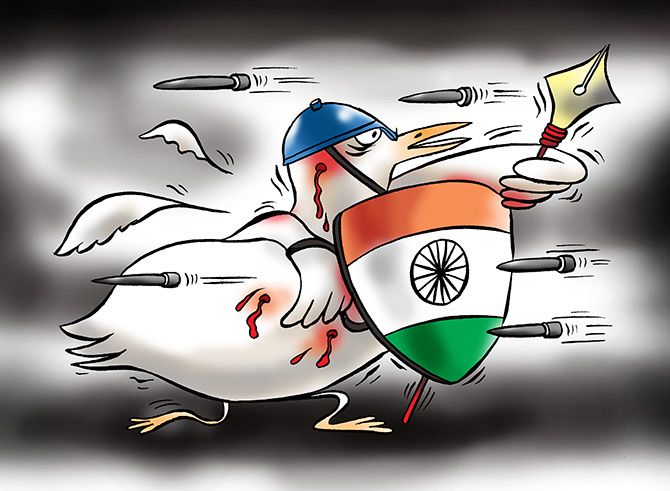 Tuesday, September 5, was a terrible, difficult night, when news broke that outspoken Kannadiga journalist Gauri Lankesh had been murdered in Bengaluru.

Lankesh was not in a conflict zone, or a riot, or a hostage crisis, or in any of the other dangerous situations that journalists often encounter.

She was doing what working people do -- coming home in the evening, parking, maybe fiddling with keys, maybe looking forward to some food and rest.

It was in this most banal of urban commuter moments that she was executed at point blank range.

The impunity of the act is shocking. Should it have been so easy?

Everyone is at pains to stress that we do not know, yet, who killed this fiercely anti-RSS, anti-Hindutva, secular, liberal journalist-activist, and publisher. This is true.

But we do know that on social media the people who howled with glee and gloated over her death seemed to belong entirely to one side of the political spectrum.

We do know that the BJP has not issued a clear, strong condemnation of it, saying instead that liberals are entitled to be upset, but what about RSS workers in Kerala?

We do know that there is a concerted effort to float the idea that the comrades themselves did it.

BJP MLA Jeevaraj has gone so far as to say that if Lankesh hadn't written about the RSS, she might have been alive -- a pretzel of a statement that both openly threatens dissidence, and takes credit for what the RSS and the BJP are assiduously denying.

We do know that Lankesh's brother Indrajit, who claims both that she was never threatened, and that it was Naxalites who threatened her, reportedly considered joining the BJP.

We do know that this woman fitted, to a tee, the description of those who are constantly vilified by right-wing forces, including by self-declared journalists and media channels who serve as government public relations retainers.

I was grief-stricken and sleepless for much of that Tuesday night, and enraged thereafter -- and I didn't even know Gauri Lankesh.

Her family, friends, and colleagues will bear this trauma forever.

Whether they knew her or not, many journalists and writers, also struggling with shock and grief, feel a coldness on their own neck.

Yet, nothing disperses the chill of fear like the warmth of anger, and Lankesh's murder infuriated the press corps, sparking protests all over the country, and spurring many journalists to rededicate themselves to the integrity and courage that the profession demands.

One only hopes that this anger translates into the kind of united effort that is increasingly going to be necessary to defend freedom of expression and democracy.

There has been much heated argument on the question of 'balance' in these polarised times.

Should firebrand activist Shehla Rashid have asked the Republic reporter to 'get out' at the Press Club protest?

Are protests over Lankesh's death meaningless unless protesters have also spoken for slain RSS workers?

Should the debate be focused on the Karnataka government's pursuit of justice, and not on the long-standing and far-reaching effects of social engineering?

I submit that this is now a smokescreen of hair-splitting, and that we are long past splitting hairs.

We will, in time, see justice for Gauri Lankesh -- or we won't, as we didn't in the similar execution-style murders of Narendra Dabholkar, Govind Pansare, and M M Kalburgi.

There will be more fear, more executions.

There will be endless sickening finessing and justification and deflection to so-called liberal hypocrisy.

There will be more discrediting of the media and more lies popularised on WhatsApp.

I submit that we are not 'in danger of becoming' a Hindu Rashtra, the dearest dream of the RSS-BJP combine. We are there.

Today, right now, we are a baby Hindu Rashtra taking its first messy, unsteady steps. This is what it looks like.

Nurtured by hard-core supporters, but also by fence-sitters, the naive, and the wilfully blind, it will very soon lose its baby dimples to become much bigger, much stronger, and much, much uglier.

The hallmark of this Rashtra is, and will be, impunity -- from top to bottom, from government policy to street murder.

You see it already in the clumsy attempt to force-feed us Aadhaar; in demonetisation; in lynchings; in interference in cultural and personal freedoms.

You see it already in the vilification of minorities, in the brazen rubbish being fed to children as history, in the unabashed propaganda sent out as 'general knowledge', and in the welding together of State and religion.

Here's a prediction: You will see it in changes to the Constitution of India.

Indian democracy is in the fight of its life.

And if you think this is alarmist nonsense, you are helping it happen. 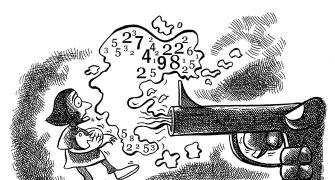 The Right to be Free and left the hell alone 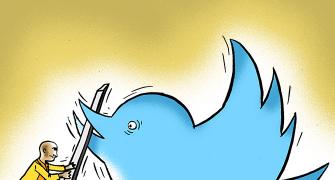 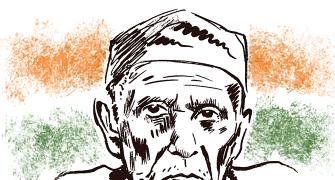