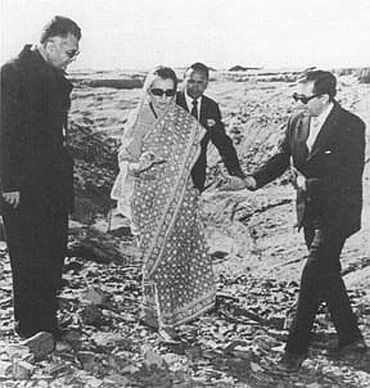 IMAGE: Then prime minister Indira Gandhi with Homi Sethna, right, then chairman, Atomic Energy Commission, and K C Pant, then minister of state for defence, left, at the site of India's first nuclear explosion in Pokharan, Rajasthan.
MUST READ: How Indian PMs reacted to nuclear ambitions

After the Chinese conducted a nuclear test on October 16, 1964 and went full steam to arm themselves with nuclear weapons, India was under pressure to follow suit.

Dr J Homi Bhabha, the head of India's nuclear programme, was in favour of it. But the momentum was lost after his possible assassination in a plane crash in 1966. The mysterious crash of Air India Boeing Kanchenjunga on January 24, 1966 has never been fully investigated.

The pressure on India was even more intense after the coming into being of a virtual Sino-American alliance after Mao Zedong and Richard M Nixon's Shanghai Communique of February 28, 1972.

The security situation for India had worsened as it was clear that a Sino-Pak-US alliance had come into existence.

On September 7, 1972, Indira Gandhi gave the verbal go ahead to the Indian scientists to prepare for a nuclear test.

The point to note is that the Indian nuclear test had no connection with Pakistan, but was prompted by global factors.

It was a courageous decision in the face of determined Western opposition, but necessary to ensure that India was not threatened by China.

After that test the world knew that India was a virtual nuclear power. This move brought in its wake Western opposition and American wrath, particularly driven by India's victory in 1971 over American arms.

In the years following the nuclear test and the liberation of East Pakistan, Indira Gandhi promoted a concept of South Asia as India's area of influence in which external influence was to be resisted.

Called the 'Indira Doctrine', it mimicked the American Monroe doctrine. But India lacked the power to enforce it and her hope to rope in Pakistan in a co-operative relationship after concessions in Simla fell apart.

However, India's undeclared status as a nuclear power did give it a degree of security in the face of the joint Sino-US threat. The nuclear tests approved by Atal Bihari Vajpayee's government in May 1998 carried the process forward to its logical conclusion.

But the credit to usher India into the big power league will remain with Indira Gandhi. 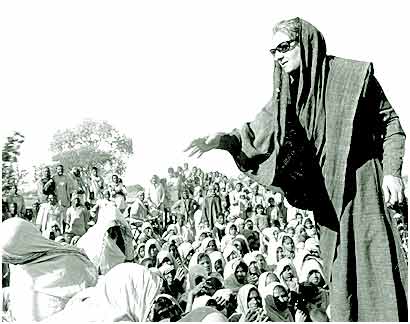 IMAGE: 'It is true that Indira Gandhi was herself responsible, at least indirectly, for the growth of extremism and fundamentalism in Punjab,' says Colonel Athale.
MUST READ: 'Indira took the bull by the horns fearlessly'

In the 1980s India faced the greatest challenge to its national unity and security.

The separatist movement in Punjab for 'Khalistan' was unlike anything else India had ever faced.

The Naga, Mizo or Kashmir separatist movements were essentially on India's periphery and did not threaten national existence as the Punjab movement did.

Even the 1962 Sino-Indian conflict or the 1965 Indo-Pak war were not a serious threat as Sikh separatism was.

The Sikhs and Punjab are part of India's heartland and the secession of Punjab would have meant unraveling the Republic.

It is true that Indira Gandhi was herself responsible, at least indirectly, for the growth of extremism and fundamentalism in Punjab.

Jarnail Singh Bhindranwale, the eventual leader of the separatist movement, was promoted initially by her own party. But soon external powers took full advantage of the situation and launched a proxy war against India.

The Punjab crisis had several socio-economic dimensions, but over a period of time it became part of the American crusade against the 'Evil Empire' of the Soviet Union (the phrase made popular by then US President Ronald W Reagan).

The unholy nexus of the US, Pakistan and the UK (with Canada in tow) made a determined bid to break India up into 'small manageable parts' (a phrase used by then US ambassador to the UN Jeane Kirkpatrick).

It must be noted that at that time India was regularly included in the 'enemy forces' in NATO war games. Sikh extremists received shelter, arms and money from the West.

The Western media even published advertisements for training Khalistanis by ex- operatives of intelligence services with quaint names like 'Teeni Meeni Services' etc.

After India broke the back of Sikh separatism, most of its erstwhile leaders have found shelter in the US. Only as late as 2000 was the project to break India up wound up. 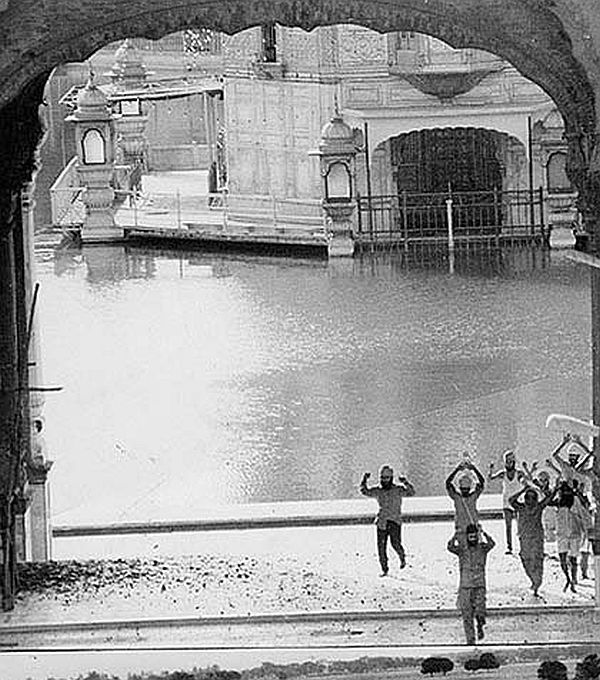 IMAGE: Individuals at the Golden Temple after Operation Blue Star -- the military operation ordered by then prime minister Indira Gandhi to evict Sikh separatists who were amassing weapons in the shrine in June 1984.
MUST READ: What General Brar told Rediff about Operation Bluestar

In June 1984, the stage was set to declare Khalistan from the Golden Temple, followed by a quick recognition from Pakistan.

The conspiring countries never imagined -- given the status of the Golden Temple for the Sikhs -- that India would dare take action against this sanctuary.

Indira Gandhi showed great moral courage and ordered army action. She was fully aware that it meant a grave threat to her person and family, yet did not flinch from acting in the supreme national interest.

Though a tragedy of monumental proportions for all Indians (Sikhs and others), it was her finest moment. The rest they say is history.

Indira Gandhi was assassinated on October 31, 1984 and made the supreme sacrifice for national unity.

On her birth centenary one is certain that she has a place of pride in the history of modern India.

Unlike her father, she was master of power politics and did not hesitate to use it.

Nixon, himself no mean player of power politics, paid her a back handed compliment when he termed her as an 'icy user of power'.

On balance, Indira Gandhi's pluses far outweigh her minuses. The nation will always remember her with gratitude for having preserved national unity against great odds. 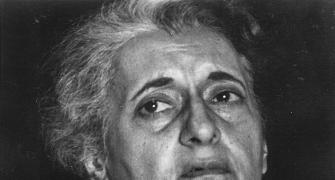 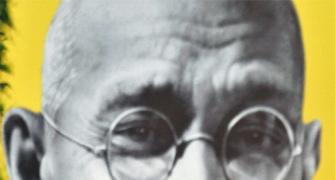 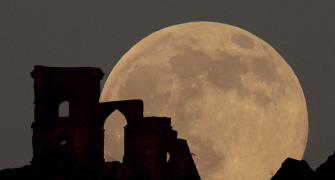 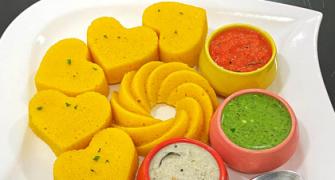 Will Devoleena get ticket to the finale? 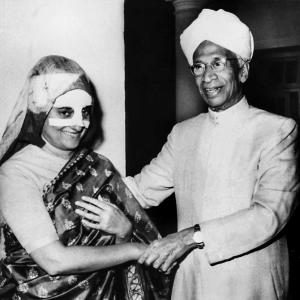