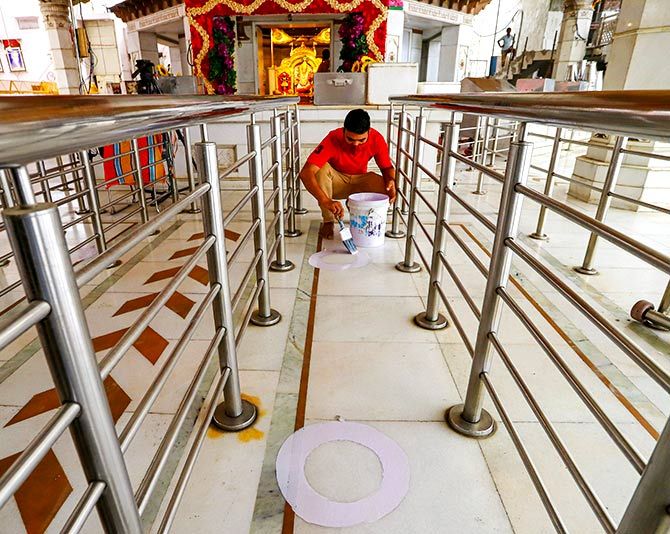 IMAGE: A worker paints circles on the floor of the Jhandewala Devi Mandir to help maintain social distancing norms, ahead of its reopening, in New Delhi, June 5, 2020. Photograph: PTI Photo

One of the abiding characteristics of the Modi Management Matrix Model is a tendency to make decisions suddenly, even seemingly impulsively and often without consulting experts in the government and outside.

This is then compounded by casting a veil over how decisions were made and issuing completely random 'supporting' data.

This was a hallmark of demonetisation.

Reports last month suggest that the government has sidestepped the criteria for lifting the lockdown of the Indian Council of Medical Research.

An expose by Mridula Chari and Nitin Sethi of the Reporters Collective on the Article 14 Web site, reveals that the ICMR had suggested 'house to house surveillance in each district' to identify people with symptoms and then quarantine them while awaiting test results.

According to a presentation made to the government in early April by the ICMR and reviewed by Chari and Sethi, the lockdown was only to be lifted in different areas after active surveillance in the districts had been established, medical infrastructure was in place and COVID-19 cases had declined 'by at least 40 per cent'.

Instead, the government has 'decided upon a set of opaque parameters -- the details of which it has not revealed to state governments -- to assess the lockdown's effectiveness and decide relaxations across 700 districts nationwide.'

Gautam Menon, an epidemiologist at Ashoka University whose stark warnings about Covid were published in March, told me of this over-centralisation: "The states seem to be fairly responsible. The Centre should have issued general guidelines and left states to tweak them."

Scientists advising the government had in February stood against a draconian China-styled lockdown while urging it to raise its game on community surveillance, according to the Article 14 report.

Community surveillance, quarantining and testing of symptomatic cases in India's densely-packed cities was feasible early on and still is if those conducting contact tracing could be trained quickly enough, says Menon.

Kerala, along with Vietnam lauded as a global role model by The Economist recently, and Andhra Pradesh, had successfully put in place such protocols.

On April 14, a note from ICMR director to state governments quoted by Chari and Sethi warned: 'The number of COVID-19 cases in India is rising exponentially.'

Even so, in the next couple of weeks the central government did not put in place the surveillance required.

Part of the problem remains that for decades, India has spent too little on public health care -- just a little above 1 per cent of GDP versus China's and Vietnam's spending of 6 per cent to 7 per cent of GDP.

The tortoise and the hare fable must be junked against the backdrop of East Asia's success in combating this pandemic.

Markets in Asia rallied last month because of accumulating evidence that China's economy is back: Car sales have recovered to pre-Covid levels, and mobile phone shipments, especially of 5G models, are up sharply.

No matter: Unnamed sources revealed that the Indian government had amassed a massive landbank to attract companies from China because of the Covid crisis.

In early March, senior members of the government were assembled at a global business summit in New Delhi, boldly declaring that India would be largely unaffected by the Covid pandemic.

The reports read, then and now, as if they were dispatches from the Extra-Terrestrial Times.

Perhaps ministers were uninformed because India's disease surveillance programme has been mostly silent since the epidemic began, just when one might expect them to be part of news briefings.

The Caravan magazine reported that the government's Integrated Disease Surveillance Programme, which has been publishing weekly reports on disease outbreaks for over a decade, has gone silent.

'Inexplicably, the agency best equipped and with most expertise to track and survey the spread of the coronavirus pandemic in India has not published a single report since 2 February, when it recorded India's first COVID-19 cases,' writes Vidya Krishnan.

The serialised who-done-what mystery goes on.

There is inadequate reporting of the rise in influenza-like illnesses in hospitals across India.

The ICMR itself has been absent from briefings.

Its own flip-flops include everything from backing away from asserting the necessity for pooled testing to championing the dubious benefits of hydroxychloroquine as a prophylactic.

Menon, meanwhile, estimates that every infected person is still infecting others at a rate of 1.2 to 1.5, which sets India up for a dramatic increase in infections.

We now face the worst of both worlds.

As we gird ourselves for rising infections, India's harsh lockdown remains an epic tragedy.