By B Raman
Last updated on: May 27, 2012 09:37 IST
Prime Minister Manmohan Singh must offer Myanmar help to increase the power supply in the country, says B Raman.

The fourth in a series on India-Myanmar relations to mark the prime minister's visit to that country, which begins on Sunday.

Reports indicate that during his upcoming visit to Myanmar, Prime Minister Manmohan Singh will meet Aung San Suu Kyi at Yangon on Tuesday. She has reportedly re-scheduled a visit to Bangkok, her first visit abroad since her release from house arrest in November 2010, in order to be available at Yangon for meeting the Dr Singh.

This gesture is indicative of the importance attached by her to Myanmar's relations with India despite her past displeasure over India's close relations with the military junta that ruled the country till the end of 2010.

Dr Singh's visit comes at a time when there are reports of spreading public unrest over severe power-cuts in many towns. The unrest in the form of street demonstrations first started in Mandalay and from there has since spread to Pegu, Monywa and Yangon.

The protesters have not taken police permission to hold demonstrations, which is an offence, but the government has chosen to ignore the violation of the law in order not to provoke them further. The protesters have been using their restricted access to Facebook and Twitter to call upon people in other towns to demonstrate.

It is not yet clear whether the street demonstrations are spontaneous or have been instigated by anti-democracy hawks in the army to weaken the position of the Thein Sein government, which has been steadily moving towards greater political reforms and opening-out to the world.

However, in an attempt to project the demonstrations as spontaneous, the protesters have accused the former military government of selling off natural gas reserves to China and pocketing the profits, while 75 per cent of the local people have no access to electricity.

Electricity consumption in Myanmar averages 104 kilowatts an hour per person -- one of the lowest in the world.

Speaking during the opening of a local office of her National League For Democracy on May 22, Suu Kyi said the power shortages were the direct result of government mismanagement and called upon the government to give priority to increasing the power supply and to creating jobs for unemployed youth.

The government announced on May 23 that it was purchasing six generators from US-based Caterpillar Inc, which will be air freighted within a week, and two 25-megawatt gas-turbines to be bought from General Electric Co.

The government has blamed the Kachin insurgency for severely damaging electricity production and distribution.

During his visit, Dr Singh should offer to help the Myanmar government on an emergency basis to increase the power supply and also gift a planeload of generators of the required capacity needed by the government.

The prime minister could also offer a special credit to enable the government to repair the damages to the power infrastructure. 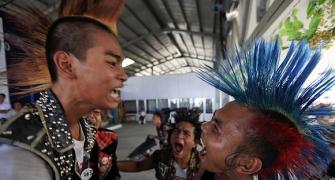