'The Dancing Girl is only one of the many symbols they threaten today.'
'Our country is changing.'
'Elements that ought to have remained on the fringes have been handed power and control of a state on a platter.'
'With this, the party that persistently wooed us with its development agenda has arrogantly taken its mask off,' says Veenu Sandhu. 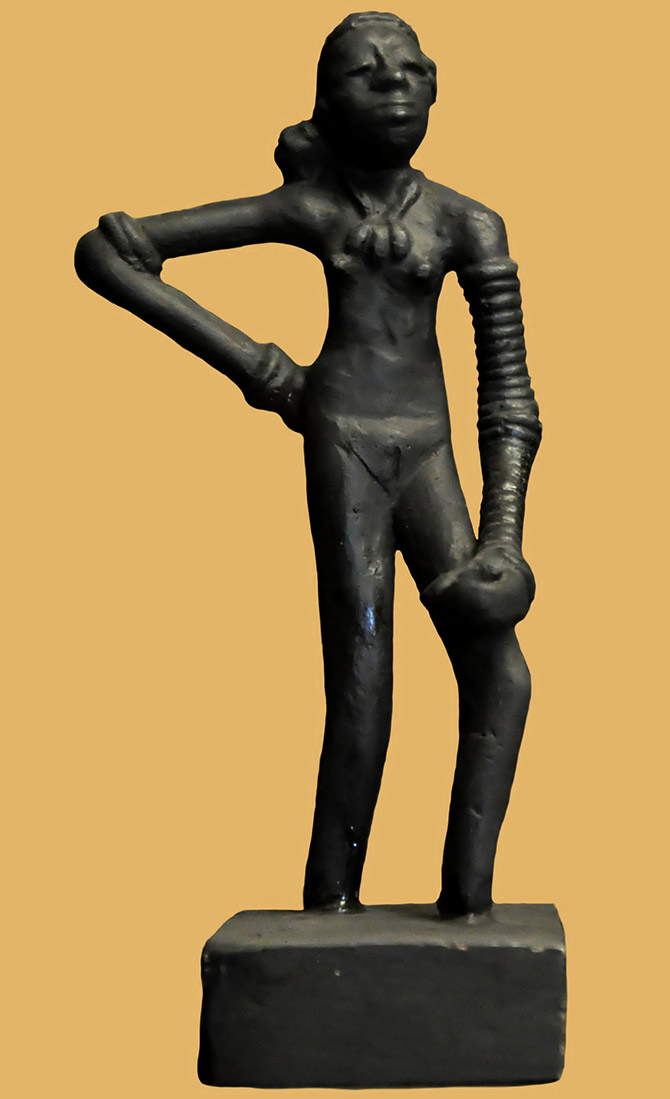 I must have been in Class VI when I met the Dancing Girl for the first time. It was the history period and we were waiting for the teacher to turn up.

Instead, to my horror, the school principal, Sister Linda, a terrifying nun, walked in. I could feel everybody around me freeze, as did I.

She had the history book in her hand and without preamble she opened it and told us to turn to the chapter on the Indus Valley civilisation.

It is a lesson I have not forgotten.

As she went through the chapter, Sister Linda seemed to transform before my eyes. We were on the finds from the archaeological site of Mohenjo-daro and she was telling us about the Dancing Girl when, suddenly, she put the book down, stood in front of the class and started enacting the bronze statuette of the girl: Chin thrust out, eyes closed, right hand on the hip, left hand resting on the leg.

I looked down into the book, my eyes wide, at the picture of the girl who had transmogrified our frightening principal into someone like her -- a dancing girl -- and my heart filled with admiration for her.

It would be many years before I would meet the Dancing Girl face-to-face at the National Museum in Delhi.

Her size left me stumped; she was not even double the height of my thumb.

This little girl had survived the ravages of time -- thousands of years. No wonder she still stood with such impudence, as though mocking the world. My admiration for her multiplied.

Today, attempts are being made to trap this masterpiece from a lost civilisation in restrictive labels.

The fate of the Dancing Girl is as though being steered in the direction that politics in the country is taking, which is allowing religion to creep into everything.

In December, a retired professor of the Banaras Hindu University claimed that the Dancing Girl is, in fact, Parvati, the wife of Shiva.

Right-leaning thinkers have for long maintained that Shiva was worshipped by the inhabitants of the Indus Valley civilisation, or the Harappan civilisation, to which the Dancing Girl belongs.

The professor, while making this assertion in a research paper published in the Hindi journal of the Indian Council of Historical Research, argued that the statuette had to be of Parvati because 'where there is Shiva, there should be Shakti (Parvati is believed to be one of the many forms of Shakti).' That was supposed to be a scientific enough explanation.

Unsurprisingly, this issue of the journal was published under ICHR Chairman Y S Rao, a member of the Akhil Bharatiya Itihas Sankalan Yojana, which is a subsidiary organisation of the Rashtriya Swayamsevak Sangh.

While that claim stands, another demand has cropped up: The Indus Valley civilisation should be renamed as the 'Sarasvati river' civilisation.

This is the demand of the Haryana Sarasvati Heritage Development Board, which is chaired by none other than Haryana Chief Minister Manohar Lal Khattar.

I wonder where this will leave the 'Indus Dancing Girl'. Why not simply let her be the Dancing Girl, free of religious associations and, therefore, not confined by them?

Incidentally, for a while now, Pakistan, too, has been staking claim on the Dancing Girl, but then Pakistan's demands we can simply ignore.

It is the forces within that are the worry. And they seem to be only getting bigger and more ominous.

The Dancing Girl is only one of the many symbols they threaten today.

Our country is changing. Elements that ought to have remained on the fringes have been handed power and control of a state on a platter.

With this, the party that persistently wooed us with its development agenda has arrogantly taken its mask off.

There are times I feel my shoulders slumping. I can't say which direction we are heading in anymore.

Will we come out of this still celebrating the all-inclusive, all-embracing idea that is India?

Or will that idea succumb to the tides that are determined to drown us if we dare swim against them?

Then I think of that little, four-inch girl who has survived it all. And I feel my shoulders straighten again and I know that if she were in my place, this is what she'd say: 'Bring it on.'

IMAGE: A replica of the Dancing Girl in the Mumbai museum. Photograph: Kind courtesy Joe Ravi/Wikimedia.org