News
Business
Movies
Sports
Cricket
Get Ahead
Money Tips
Shopping
Sign in  |  Create a Rediffmail account
Rediff.com  » News » How Trump will 'deal' with the world :)

'Europe can be discussed on a golf course...'
'All that phoney talk about human rights, climate change, Green energy...'
'North Korea? What do I care what the man with the bad haircut does?'
Ambassador B S Prakash's tongue-firmly-in-cheek look at the world according to Donald J Trump.
Illustration: Uttam Ghosh/Rediff.com 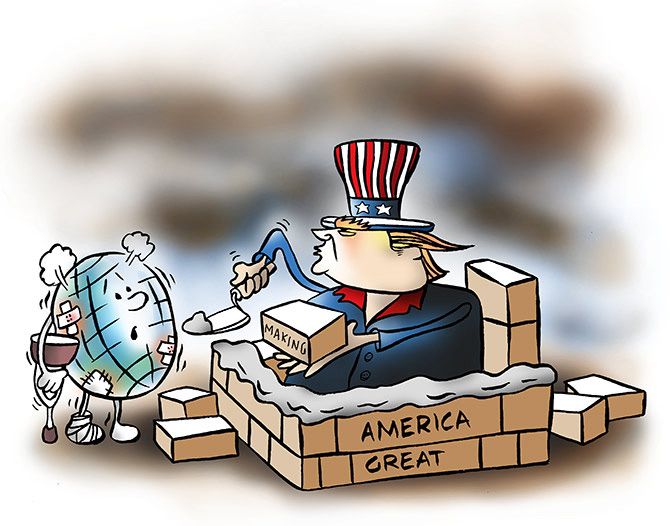 It is the practice in the US that a briefing is given to the incoming President by the old professionals of the Establishment, especially on matters relating to foreign affairs, defence, and intelligence.

Here is a preview of the meeting to be held by the President-elect in the gold and marble board room setting of the Trump Towers in Manhattan and to be attended by leading lights of the State Department, Defence and CIA.

President-Elect Trump (PET): Welcome, Ladies and Gentlemen. Let us get started and give ourselves 90 minutes.

Shoot. Please try to keep it short, straight and practical.

What will be my challenges as I work towards making America great again?

Official from the State Department (OSD): Let me first give you an overview, Sir.

Our challenge is to remain the predominant and indispensable power in a world where other powers are rising and competing.

Also to see that the global order continues to be guided according to our values and interests.

Head of Policy Planning (HPP): To put it in other words, Sir, we have to ensure that America's exceptionalism and manifest destiny are fulfilled.

This is how America stays number one... er... we make America great again.

Official from Department of Defence (ODD): And at that level of analysis, Sir, our task is to keep America the strongest military power; apart from safeguarding the homeland, to make American forces the ultimate arbiter of all conflicts, in any part of the world.

PET: Hmmm... All big and noble words. Care to break them down to what I should be doing?

OSD: Sure, we will have to break it down from the global to the regional and then to theatres of crisis.

Shall we start with Europe and NATO?

PET: Why? No, let us proceed in another way. Not the global-regional-local kind of talk.

Tell me, what is the most important thing that will hit me when I get to the Oval Office?

ODD: Well, Sir, the most pressing ongoing crisis will be the fight against ISIS. We are likely to be in the midst of Mosul.

OSD: And the larger Syrian situation. Secretary Kerry had expected the new President, frankly, Sir, your opponent to be pressing for a fuller engagement, a no fly zone to be imposed etc.

Also to see how to counter Russia's growing presence there.

PET: I see. Now, take it from me folks. I do not -- repeat -- not want larger engagement in Syria or Iraq or what is that other place... Afghanistan.

But I want ISIS destroyed... No more pussyfooting there.

And those guys with plenty of dough, Saudis, Kuwaitis and others whoever they are... will pay for it and manage their own region.

PET: Why bother with Assad? He is needed there for running the show. And if Putin is backing him, that is fine by me too.

Mind you, don't believe those election rumours that I love Putin. I don't know the guy.

All I am saying is that I have no beef with him. And if he is fighting ISIS and we are fighting those bastards, why can't we work together?

Let us start with that and don't give me any more headaches on that front.

I will sort it out as we go forward. What else?

Who else is causing us bellyache?

ODD: The North Koreans are likely to launch missiles, Sir.

PET: I thought they had already. Is it not for the Chinese to control them?

What do I care what the man with the bad haircut does? He does not scare me.

Matter of fact, I may scare him. I am more unpredictable.

HPP: But, Sir. I must insist on a policy framework here.

If we ignore North Korean action, Japan and South Korea may be compelled to go nuclear too.

The non-proliferation regime will get completely destroyed. Also our security commitments and treaty obligations with Japan...

PET: Folks, have you not been following my speeches through the campaign trail?

Why should we bleed money for the security of the rich guys like the Japanese or Koreans?

Time, they looked after their own interests or at least paid us for looking after theirs.

Too many freeloaders. And do not talk to me about treaties.

We will demand a relook at all those old treaties. Next...

HPP: Then there is Europe and NATO.

Some of our allies are a little worried about your lack of interest and commitment to our allies...

PET: Let Europe, be. I cannot stand them, anyway, trying to give me a lecture and going all intellectual.

Why haven't you brought up more important issues? Mexico... trade-deals... all the jobs going to China..?

Europe can be discussed on a golf course, all that phoney talk about human rights, climate change, Green energy...

OSD: On Mexico and your call for a wall, Sir, how do you wish to proceed?

PET: I have a plan, but I am not going to tell you folks, now. But here is what you do.

You give me a paper with all the figures: Totals of illegals, legal immigrants, trade deficit, jobs lost to Mexico, costs of being in NAFTA.

I will also bring in the guy who 'games' my casinos -- the guy has never made a loss. He will come up with something where we get the wall done, if not the whole wall, at least some of it and we will split the costs 50:50.

I sense a deal, but will reveal it in time.

HPP: The larger questions of free-trade deals and NAFTA, Sir.

Look, this is what I am going to do. Keep jobs here.

If American companies want to go to Mexico, China, Canada, wherever.... it will cost them. Let us get that straight.

All that globalisation stuff... well, that is for Obama or Hillary.

Now, what about China.

HPP: That is the big one, Sir.

There is a security aspect and an economic aspect and the larger strategic questions...

PET: I will tell you what. Let me get to know their President.

I have dealt with the Chinese in business. They are pragmatic and realistic. No point in discussing all that Confucius-Mao-Chinese think long kind of talk now.

I will talk to Xi, man to man, and then we will see how to strike a bargain.

Say, I insist that they give up making iPhones and iPads in China and in return keep silent on what they are building in that good for nothing little islands in the South China Sea?

How does it sound?

If Putin becomes a buddy, that will change everything too. That is how Nixon operated: It takes two to tango, but three to complete a deal, Kissinger once told me at a party.

OSD: Sir, India-Pakistan tensions are also rising. India is the largest democracy in the world and...

The other day the Hindus... or were they Indians... anyway called me and put garlands around me. I have some bright IT guys too in my hotels.

They always bring up terrorism... we must support them in their fight against Al Qaeda or Taliban or whatever.

ODD: Actually, Sir. Their problems are a bit different.

There are these Pakistani groups that trouble them called LeT, JeM...

PET: Don't go into too many details, my man.

If LeT is troubling them, let it be.

It is time for lunch and Ivanka is organising it today for the whole clan.

B S Prakash is a former Ambassador who had also served as India's Consul General in San Francisco.