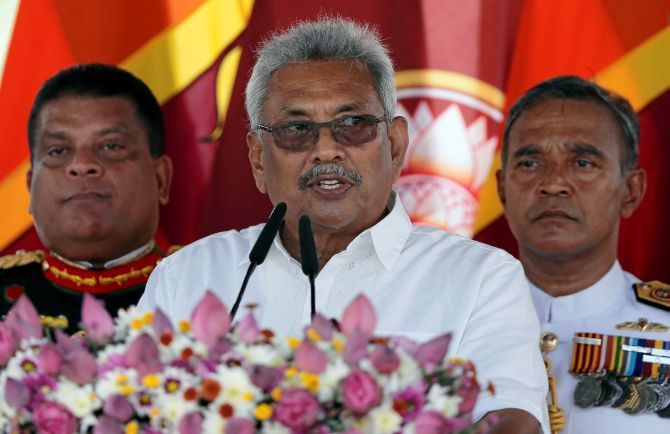 Gotabaya Rajapaksa was on Monday sworn in as Sri Lanka's seventh President at an ancient Buddhist temple, a venue chosen to reflect the massive mandate he got from the Sinhalese majority, as he vowed to protect all communities while giving foremost priority to Buddhism.

The swearing-in ceremony took place at the Ruwanweli Seya, a stupa and a hemispherical structure containing relics and considered sacred to Buddhists all over the world, in the ancient north central town of Anuradhapura, around 200 km from the national capital Colombo.

Rajapaksa is the first president to be sworn in outside Colombo.

Clad in immaculate white, Rajapaksa, 70, signed the official document in the presence of Chief Justice Jayantha Jayasuriya at the auspicious time of 11:49 am after being administered the oath by the president's secretary Udaya R Seneviratne.

In a short speech, he thanked the powerful Buddhist clergy in the country for backing his presidential bid.

Rajapaksa said he would protect all communities while giving foremost position to Buddhism.

His selection of the venue, the Ruwanwelisaya stupa and a hemispherical structure containing relics, is one of the eight most prominent Buddhist shrines and in line with the massive mandate he won form the island's Buddhist majority.

The stupa which is considered sacred to Buddhists all over the world was built by King Dutugemunu in the 140 B.C., who reigned over the country after defeating Tamil King Elara.

Rajapaksa was credited for ending the military campaign of the Liberation Tigers of Tamil Eelam (LTTE) who ran a 30-year war to create a separate Tamil homeland in the north and east of the island.

Rajapaksa is the younger brother of the former President Mahinda Rajapaksa who was a special guest at the ceremony.

Later on Monday, he is expected to appoint Mahinda the new prime minister.

He was a colonel in the Sri Lankan Army before leaving it to migrate to the United States in 1992. He was until then in the battlefield against the LTTE in the north.

Rajapaksa returned to Sri Lanka when older brother Mahinda was named the presidential candidate in 2005. With his brother's victory he was appointed to the powerful position of Secretary to the defence ministry.

His sharp leadership skills and incise decision makings were largely responsible for ending the LTTE's armed campaign. In 2006, he survived an assassination attempt carried out by the LTTE with minor injuries.

Rajapaksa is also the first civil servant to become president, only the first sibling of a president to win presidency, the first president in the history to be inducted in office without even spending a day as a parliamentarian.

Analysts said his large mandate on Saturday with over 1.3 million votes reflected the public confidence in his strong leadership and his ability for precise decision making. 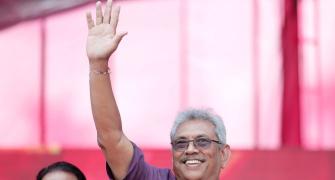