News
Business
Movies
Sports
Cricket
Get Ahead
Money Tips
Shopping
Sign in  |  Create a Rediffmail account
Rediff.com  » News » How not to do a no-trust vote

'Friday's parliamentary confrontation obviously was a precursor, or a trailer, to use a pop culture reference, to the real show awaiting the nation,' says Saisuresh Sivaswamy. 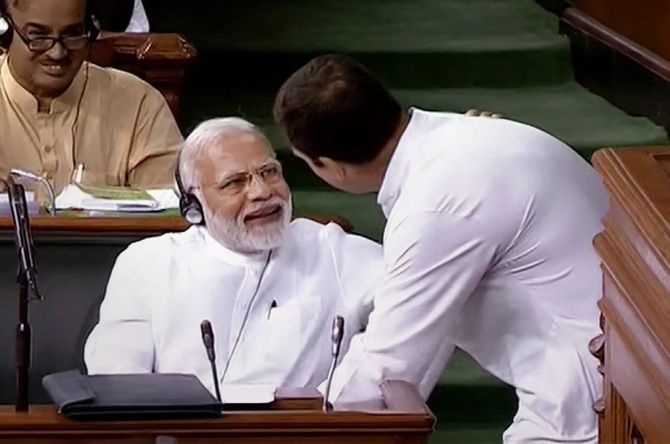 It is interesting that not one of the Opposition parties that collectively moved the no-confidence motion against the Narendra Damodardas Modi government has the required numbers in the Lok Sabha to move the resolution on their own.

As per rules, a minimum of 50 MPs is required to propose a no-trust motion against the government.

The largest Opposition party, the Congress, falls short of the number by 2, clearly the reason it was piggybacking on a clutch of other parties.

It has been 15 years since a no-confidence motion (not to be confused with a confidence vote moved by the government) had been tabled in the Lok Sabha.

In 2003, it was piloted by then Congress president Sonia Gandhi against Atal Bihari Vajpayee's NDA 1.

Her son's pyrotechnics on Friday against NDA 2, while providing great social media traction, had no better outcome.

No-trust motions have great tactical value, in scoring important points over the government, cornering it over misdeeds, and exposing its misgovernance.

As the party with the maximum experience in office, the Congress knows the power of a no-confidence motion, and the necessity to wield it well, which explains its desperation to piggyback on it.

But alas, the process was hobbled from the very start by the fact that it had been moved by a regional party over a regional issue.

Not to disregard the depth of emotion in Andhra Pradesh over what it considers to be betrayal of its interests by the Centre, but the very opening of the debate, despite the articulate Jaydev Galla leading it, failed to connect with the nation at large.

There are issues that connect the nation's disappointment with the incumbent government; not providing the promised funds for one state out of 29 is not among them.

Did Rahul Gandhi, who was the second batsman fielded by the Opposition, in his often dramatic but mostly bombastic speech even mention what so exercised the prime mover of the resolution? No.

And that illustrates both the disconnect among the parties lined up to take on the NDA in the elections whenever they are held, and the fact that the Congress, with its overarching national focus, even if the spread is a little limited now, is intrinsic to the Opposition formation.

But the question that remains at the end of the day is, why did a government that was reluctant to face the no-confidence motion in the Budget session turn amenable just three months later?

What has changed between then and now?

If the Opposition seeks to derive tactical advantage from tabling a no-confidence motion, so can the government.

Two of the Congress heavyweights did the job for their party on Friday.

The newly energised Rahul Gandhi, who seems to be on a permanent diet of Red Bull these days, and the dour and pugnacious Mallikarjun Kharge got their point across quite well, if you can overlook monotonous drones like Mulayam Singh Yadav and others dotting Parliamentscape.

But of all the Opposition big guns who made themselves heard on Friday, the prime minister focused on the Congress alone.

One, is that given the uncertain ties with many of the BJP's allies, there is no saying which regional party could turn a friend or foe tomorrow, so why antagonise anyone unnecessarily?

Two, of all the parties ranged against him, there is none that worries Narendra D Modi and Amit A Shah more than the Congress.

And in the Congress, it is its leadership, 'the family' as he sneers, that he singles out, for he knows it is the Nehru-Gandhi glue that keeps the Congress both together and in circulation.

So the Friday hijinks can be reduced to the Congress's Rahul Gandhi staking claim to the post of prime challenger to Modi, and the latter willy-nilly granting it by singling him out in the bulk of his reply to the debate.

In the first 60 minutes, Modi focused on the Congress for 50, that was how much the rival party occupies his mindspace.

Otherwise, there was little to write home about the day's proceedings.

Except for one minor thing.

Any time in India is election season, with one state or the other facing some election or the other. And 2018 is no different.

From a little later in the year to next, there is a line-up of state elections falling due, with the mother of them all due by May next year.

Friday's parliamentary confrontation obviously was a precursor, or a trailer, to use a pop culture reference, to the real show awaiting the nation.

Nor does the Opposition need to take on the central government in order to win power in states -- unless you are the TDP, that is, in which case you represent the Centre as the villain who is responsible for the state's mess, smartly passing off the blame that is yours by right but which you hope the people are not stupid enough to see.

No, Friday's parliamentary drama seemed to have a larger design, calculation, behind it.

A government that was reluctant to avoid a debate on its performance three months ago suddenly embracing the opportunity; a debate that was meant to wind up by 6 pm extending till 11 pm, with the government's best orator going on air at super prime time for an hour-and-a-half to both demolish the Opposition and to give a fair account of his administration over the last four years.

Could it be, could it just be, that the ongoing monsoon session of Parliament is the last one for the 16th Lok Sabha, with early Lok Sabha elections being called later this year?