How important is Dr Singh's visit to Myanmar?

Leaders of only a few Asian countries have visited Myanmar in the new era. Notably, China is not among them.

Dr Manmohan Singh's visit, the first by an Indian prime minister since 1987, is imbued with larger regional significance, says Rajiv Bhatia, a former ambasaador to Myanmar.

The second of a series on India-Myanmar relations, to mark Dr Singh's visit, which begins on Sunday.

Part 1: Why India is wary of Myanmar-NSCN-K agreement

Visits by India's prime minister to foreign lands are frequent -- and routine. But it is different in respect of his visits to neighbouring countries, which are still quite rare. Dr Manmohan Singh's voyage to Myanmar from May 27 to 29 has a special novelty value.

Historic changes unfolding in that country and the fact that Rajiv Gandhi was the last prime minister to go there in 1987 lend unusual importance to the forthcoming visit.

As Dr Singh reaches the 'Golden Land', he will join a unique group comprising Jawaharlal Nehru, Lal Bahadur Shastri, Indira Gandhi and Rajiv Gandhi. Nehru and Indira Gandhi visited Burma more than once. Nehru received then Burmese prime minister U Nu many times. Even Ne Win, the military dictator, whose politics differed radically from that of U Nu, the democrat, shared the latter's passion to be in India frequently.

Shastri and Rajiv Gandhi each visited Burma once in 1965 and 1987 respectively. The last visit took place on a high note of optimism, but it was a failure due to Ne Win's negativism.

None foresaw that Burma then stood at the cusp of historic changes including the mass uprising in 1988, the overthrow of Ne Win's regime, the brutal crackdown by the military, and the 1990 elections which gave victory to the National League for Democracy, but not power. This was followed by two decades of direct military rule.

Once again, Myanmar gazes at the future. Will the people's ambition to become a genuine, inclusive democracy that is at peace with itself and brings progress at home and stability in the region be fulfilled?

The period, which began with flawed general elections in November 2010 under a new constitution and may last until the next elections in 2015, represents an era of complex transition.

The present stage of 'managed democracy' is notable for a significant increase of freedom for people and the media as also for inclusiveness and a tendency to reform the old ways, be it in politics, the economy, the social sector and foreign policy.

This change has immense possibilities, but they are circumscribed by red markers set by the military, still the key driver.

Dr Singh knows President Thein Sein well, having met him on a number of occasions and received him in Delhi last year. It is due to the prime minister accepting the advice of his top advisors that the visit is taking place. Earlier, he was due to attend the BIMTEC summit to be hosted by Myanmar, and a short bilateral visit was to be appended to it.

When the summit fell through due to disagreement about dates, New Delhi could have pulled out of it altogether. That it did not do so and instead chose the option of a substantive stand alone visit, demonstrates South Block's awareness of the high stakes involved. It is clearly determined to promote mutual interests through a prudent strategy.

Leaders of only a few Asian countries have visited Myanmar in the new era. Notably, China is not among them. Dr Singh's visit is, therefore, imbued with larger regional significance.

On reforms in Myanmar, India's position is certain to be enunciated clearly: Support for the process as defined by the people's leaders themselves; reiteration of non-interference in internal affairs; and a pledge to help through sharing of India's experience in democracy, Centre-state relations, inclusive governance and economic development.

The prime minister will portray India as Myanmar's dependable partner. In return, Naypyidaw will hopefully show commitment to pursue an independent foreign policy, be it vis-a-vis China, the United States or the European Union.

Besides, Myanmar could help more by assuring the Indian prime minister that its past promises to cooperate in better management of border security, will be fulfilled.

On economic links, it is India that is lagging behind to deliver on past commitments, although Myanmar's responsibility too cannot be ignored.

For assisting Myanmar, India should focus on areas that are its strengths such as agriculture, healthcare, SME, education, IT and capacity-building. As to large infrastructure projects, let us first fulfil our past commitments and then only think of undertaking new ones.

A meeting with Aung San Suu Kyi will perhaps be the most closely watched item on the prime minister's calendar. Both she and her party on the one hand and some in New Delhi, on the other, have nursed grievances against each other. Her supporters were convinced that India should have sacrificed its strategic interests to support their cause.

Some in India argue that she has been unfair in her criticism of Indian policy, revealing a bias towards the West. But now it is time to look to the future. Both Dr Singh and Suu Kyi can be counted upon to show statesmanship. She is likely to be invited to visit India.

A substantial number of bilateral agreements are likely to be signed, covering defence, economic, energy and cultural cooperation. Commitments to step up sub-regional cooperation would be exchanged, thereby stressing a natural connection between western Myanmar and our north-east region. Myanmar may receive further assistance in enhancing its technical and institutional capacities.

But beyond what happens inside the conference rooms, lies the potential significance of the visit. It will showcase a truly unique and historical relationship.

When the Indian prime minister prays before Lord Buddha's image at the Shwedagon Pagoda, he would acknowledge an important sacred bond.

As he pays homage at the mazar of Bahadur Shah Zafar, India's last emperor, he will honour a common legacy.

In interacting with the Indian Diaspora in Yangon, Dr Singh will express appreciation for those who retained faith in Myanmar even when it fell off the radar of much of India.

A new chapter is about to begin in the shared journey of India and Myanmar. Rajiv Gandhi's bold venture was derailed by history, which now seems to favour Dr Manmohan Singh.

Rajiv Bhatia, a former Indian ambassador to Myanmar, is a visiting senior research fellow at the Institute of Southeast Asian Studies, Singapore. 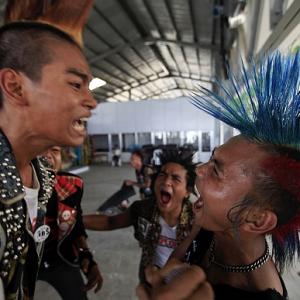