News
Business
Movies
Sports
Cricket
Get Ahead
Money Tips
Shopping
Sign in  |  Create a Rediffmail account
Rediff.com  » News » How gullible Modi has been in dealing with Pakistan!

'The Pakistani game plan in making its envoy in India perform the last rites of a fledgling peace process is madness with a method,' says Rajeev Sharma. 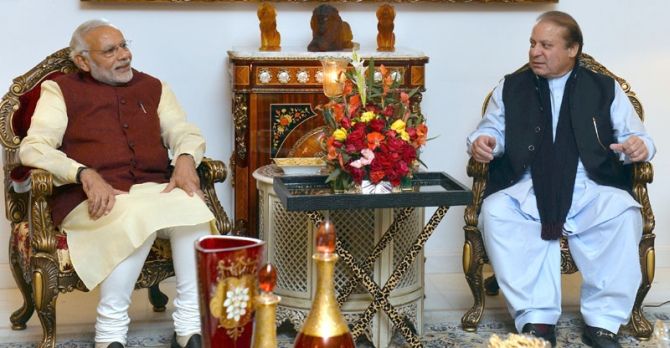 IMAGE: 'The Modi government has covered its face with mud by its flawed approach of trying to drive bilateral diplomacy with a difficult neighbour like Pakistan like event management.'

Pakistani envoy Abdul Basit's unexpected assertion on April 7 that the peace process with India is 'suspended' is a death blow to Prime Minister Narendra Modi's bold, though faulty, initiative to strike peace with an intransigent neighbour like Pakistan.

It reveals how gullible, and even presumptuous, Modi has been in even thinking that the Pakistani leopard will change its spots.

The fact that Pakistan has chosen its high commissioner in India, rather than its foreign office, to read out the death warrant of Modi's peace initiative is suggestive of Pakistan's India strategy in the clever chess game that Islamabad has been playing with New Delhi for the last 100 days or so.

By choosing its envoy in India to deal a body blow to Modi's peace initiative, Islamabad wants India to take the extreme step of recalling its envoy in Pakistan and expel the Pakistani envoy in India. After all, an envoy's job is to foster good relations between the host country and the sending country.

But Basit has acted to the contrary, perhaps the only foreign envoy to India after similar shenanigans by Sun Yuxi, the Chinese ambassador to India, who said almost a decade ago that the whole of Arunachal Pradesh belongs to China.

Obviously, Basit was doing his masters' bidding in Islamabad. Here is an unusual case of an ambassador who is telling his host country to go climb a wall as no good will come of the peace initiatives. This is a conduct unlike an ambassador, but then folks calm down as he is not his own speech writer.

The Pakistani game plan in making its envoy in India perform the last rites of a fledgling peace process is madness with a method.

By doing so, Pakistan is actually inciting India to take the extreme step of expelling the Pakistani envoy in India and recalling its envoy in Pakistan so that it can further lampoon the Modi government for acting in extremes.

Basit has driven two more nails in the coffin of Modi's peace efforts by saying one, that there will be no reciprocity in the Pakistani Joint Investigation Team visiting the Pathankot airbase, thus ruling out the possibility of an Indian JIT visiting Pakistan as a reciprocal measure; and two, deliberately mentioning the Kulbhushan Jadhav episode, the alleged Indian spy who was arrested by the Pakistani authorities last month.

The fast-paced developments of April 7 are a pointer to Pakistan's strategy. Here are the five takeaways:

At the end of it all, it is the Modi government which has covered its face with mud by its flawed approach of trying to drive bilateral diplomacy with a difficult neighbour like Pakistan like event management.

The biggest lesson that Modi and his team of advisors must learn from this episode is that international diplomacy can't be run by optics alone and there is no alternative to substantive a result-oriented dialogue process which has to be dealt at the level of the foreign office.

The harsh truth for Modi is that his bold Pakistan policy has crashed shortly after take off. 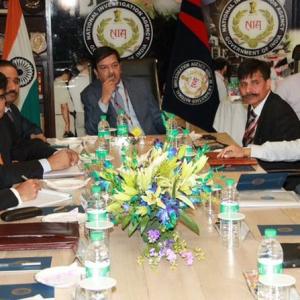