News
Business
Movies
Sports
Cricket
Get Ahead
Money Tips
Shopping
Sign in  |  Create a Rediffmail account
Rediff.com  » News » Fake news has been around from Mahabharat times 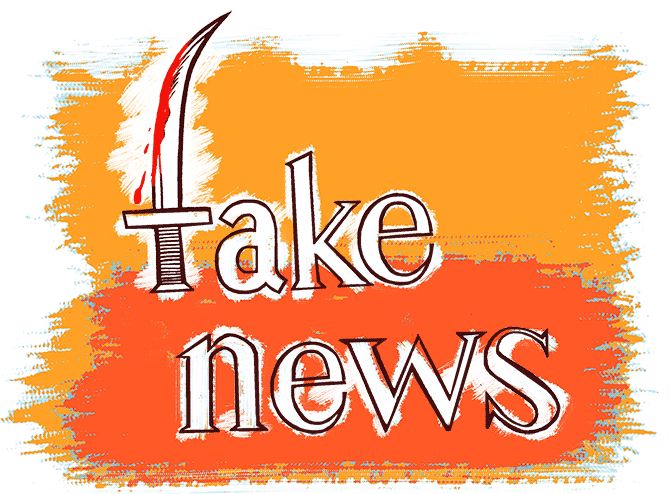 Fake news, now so much in the news thanks to Donald J Trump, once threatened to place me in dire peril. Ironically, it also saved me. This is how it happened.

It was a surprise when P A Sangma, a former Lok Sabha Speaker, invited me home to tea in his sprawling New Delhi bungalow. We had met once before in General Jake Jacob's house in Calcutta, but hardly hit it off.

Since Sangma was then chief minister of Meghalaya, I mentioned my old friend, Nari Rustomji, who spent almost his entire ICS career in the north east which he loved dearly and knowledgeably. Sangma didn't respond.

Much later in the evening, he murmured, "So you have met my chief secretary", stressing the possessive pronoun. That was the sum total of our conversation.

In Delhi, he was charm itself. He wanted me to write his biography.

"We have something in common," he said, pulling out several sheets of Google print-outs. He read out that although a Hindu, I was married in Sydney to a Roman Catholic.

I told him the first two points were correct. But not the third. My wife is also Hindu. Thank heaven for that.

Sangma's immediate disinterest in the project spared me from having to make excuses.

That wasn't my first brush with fake news.

The army PRO would regularly ask me during the Bangladesh war whether my questions were on behalf of The Statesman or one of the newspapers abroad for which I also wrote. He was quite candid about his reply depending on my answer.

Which was fake and which the true version?

Fake news was even more blatantly manufactured during the Sikkim takeover a few years later. I was telexed a draft news report purporting to be an eye-witness account of anti-Chogyal demonstrations in Gangtok.

It came from the ministry of external affairs, and we were expected to publish it as our own authentic report. I responded diplomatically (as I thought) that we didn't have a correspondent in Gangtok. Our nearest reporter was in Darjeeling.

Back came an amended telex with a Darjeeling dateline starting 'Reports reaching here from Gangtok show...'

We must turn to the epics for fake news on an epic scale.

The ultimate in such propagation was surely Yudhishthira's immortal 'Aswathama hatha... (Aswathama is dead)', followed by a whispered 'iti narova kunjarova... (whether man or elephant I don't know)' in the Mahabharata.

It convinced the great Dronacharya, commander of the Kaurava forces, that his beloved son Aswathama had indeed been killed.

Many believe such episodes both reflect and mould a people's character.

The personalities are semi-divine, the stories enjoy religious sanction, and they are handed down from father to son through the ages as part of the nation's collective memory.

Like the theft of the nectar of immortal life from the ocean's churning, they may even set precedents for contemporary diplomacy.

Of course, the Mahabharata and nectar theft tales might themselves be fake news. They may never have happened. Legend isn't history.

The tale of General Charles Napier sending the shortest telegram ever -- just one word, 'Peccavi', meaning 'I have sinned' in Latin -- when he conquered Sind for the British East India Company in 1842 comes to mind.

The Peccavi tale appeared in Punch two years later, thought to be the handiwork of a witty teenaged girl, Catherine Winkworth, who grew up to become a translator and campaigner for women's rights.

The magazine swallowed her joke hook, line and sinker. It may have seemed a lark then, but repeating today that 'Peccavi' is the shortest telegram in history makes it fake news.

For Trump, however, fake news often seems to be anything he doesn't want to hear. No wonder he flips and flops and contradicts himself.

One day he insists that reports of his son ever meeting any Russian officials is fake news. The next day he admits that Junior had indeed sought the low-down on Hillary Clinton from the Russians.

This indicates a more serious inconsistency that might gravely affect Trump's credibility. If the Russians did intervene in the 2016 US presidential election, as he froths and foams, it can only be because Vladimir Putin can't abide Mrs Clinton. Therefore, they helped Trump.

It's a piquant situation. The present 'Leader of the Free World', as Western governments style the US president, may owe his elevation to someone who heads what a predecessor called the 'Evil Empire'.

Or is that, too, fake news? 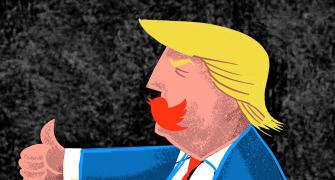