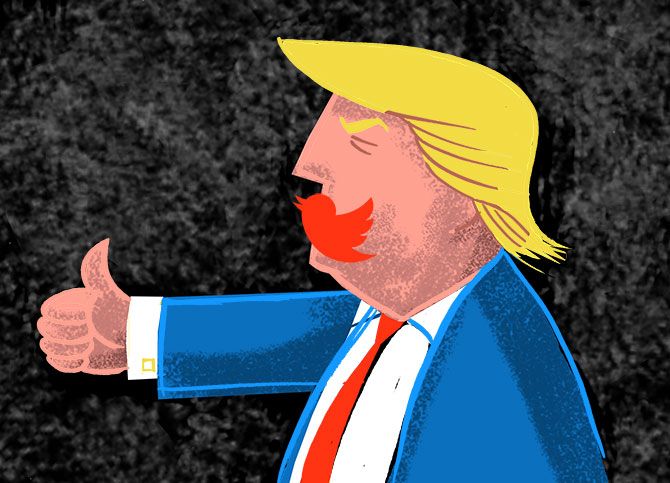 Suddenly, the word on practically everyone's lips is 'fake news'.

In a simpler, less combative era, we would merely wag our finger, cluck our tongue and exclaim, 'What exaggeration!' when we encountered something similar in a newspapers, radio or TV.

And if the person or outfit did it often enough, we would tell him to go easy on 'such propaganda'.

The anxiety about fake news is of the same level as smallpox or TB in an earlier era.

What has brought this on?

A big part of it is from the United States where many well-known and well-respected print newspapers (and their digital avatars) are convinced that nothing other than manipulation could have made Americans vote for a man they hate, Donald Trump, for president.

Is this sudden and violent pre-occupation about fake news something unusual or is it merely reflective of the times we live in where the nature of the dominant media, print and television, is giving way to mobile/social media and the anxiety that it provokes?

After all, when TV first burst on the world stage, in the mid 1950s there was a similar hand-wringing like today of which Vance Packard's The Hidden Persuaders was one example.

Packard's bete noire was motivational research, which he believed manufacturers used to dig into consumers' weaknesses and used those in constructing appeals instead of facts about the features of a product -- the big example for him was Marlboro cigarettes which used rugged masculinity as a platform to appeal to our hidden desire to be masculine rather than talking about the features of their cigarette.

Is it that when a new techno-commercial frame appears, it creates a lot of anxiety?

The 1950s of Packard's time was when the Madison Avenue advertising agencies were born and their practitioners claimed almost god-like skills in convincing people to buy things. Not unlike our present time in which algorithm wielders exaggerate their ability to target and persuade people to buy things or vote for parties.

A major reason why the anxiety and suspicions of the Packard era has come back in full force in our times is that the Internet industry of our times, for reasons I have not been able to fully understand, also looked to earn it living from advertising revenue.

Once this course was set, the 'click-bait' phenomenon also kicked in, that is, some Internet business created outrageous sounding headlines in the hope that Internet users would click these headlines out of curiosity and thereby earn revenue for such click-baiters.

Thus, one big force behind the fake news phenomenon are click-baiters.

It is worth reflecting that the faking of news is not only about misrepresenting facts: That is the simplest form of faking, easy to detect and even easier to legislate against. The more dangerous tactic is news framing.

Here is an example of framing: The current crisis in banking can be framed as one caused by 'inefficient managers in public sector banks' with the implied conclusion that the way out is to privatise all PSBs.

Alternatively, it can be framed as one caused by 'corrupt businessmen' tempting bank managers with the implied conclusion that what we need to have are much stricter anti-corruption laws and stricter penalties.

We could the first frame, the 'privatisation frame' and the second one the 'stricter laws frame'.

If the Privatisation Frame is used in a news report and presented to a left-of-centre news reader, it will amount to fake news for him.

On the other hand, if the Stricter Laws Frame is used in a news report and presented to a reader who is a firm free-market believer, it will amount to fake news for him.

There can be even grander societal level fake news.

A classic example is the 19th century British belief in 'The White Man's Burden'. This was the belief that the British empire existed not for the economic or strategic benefit of the British State or its citizens but because primitive people such as those in India were incapable of self-government and thus needed the British to rule them, and with British guidance, could eventually become civilised.

The acceptance of the White Man's Burden thus becomes an instrument to gain societal-level justification for colonial rule.

Also, of late, the speed at which fake news travels has been a matter of public debate. As an example, I have heard it being said (and written) that 'child snatching' has suddenly appeared in India because of Internet communication tools such as instant messengers.

But here are some interesting facts from the National Crimes Record Bureau in India. 55,000 children were reported as abducted in 2016 and this was an increase of 20 per cent over the previous year.

The NCRB data also shows that convictions against abductors are hard to achieve with the rate of convictions in abduction cases not only small but declining sharply over the years.

Should the child kidnapping issue be framed as the poor-law-and-order-states frame or, as it is currently framed, blame it all on Internet communication tools?