'Given the disdain Trump has shown for our community's values and experiences, it is disappointing that a handful of wealthy, conservative donors invited him to address their friends last weekend,' say Mira Patel and Gautam Raghavan. In a video message released in advance of the event, Trump says that he looks forward to speaking about making America great again. While no community is monolithic in its political views, we are dumbfounded that anyone honestly believes that Donald Trump represents progress for our community.

Indeed, there has never been a presidential candidate whose temperament, views, and track record are more at odds with those of Hindu Americans, Indian Americans, or the broader South Asian American community.

Donald Trump wants to build walls, block comprehensive immigration reform, and establish deportation task forces to round up the undocumented.

It may be surprising to Trump (and the Republican Hindu Coalition) to learn that from 2000 to 2011, the undocumented Indian population grew by 94 percent, and over the last 25 years, the growth of undocumented immigrants from India has far outpaced any other country.

In Trump's America, we are not welcome.

Donald Trump has an overly simplistic understanding of national security and foreign policy in an increasingly complex world. He masks his lack of expertise with vague platitudes about 'rebuilding the military,' and offers impulsive bluster when we need a steady hand and level head.

At a time when America needs clarity and consistency in our Commander-in-Chief, he is thin-skinned and trigger-happy.

In Trump's America, one tweet could trigger an international firestorm.

Donald Trump has run one of the most racist and xenophobic campaigns in modern American history.

He supports racial profiling and does not understand the constitutional risk posed by 'stop and frisk.'

He wants Muslim Americans registered in a database; that is, assuming he cannot ban them outright from entering the country in the first place.

At one of his rallies, he mockingly attempted to mimic the accent of an Indian call centre employee. He espouses alt right, white supremacist rhetoric.

These statements not only demonstrate ignorance. They tacitly enable others to persecute us.

Our community is all too familiar with the sting of discrimination and violence. We have experienced fear, hatred, and mistrust simply for the way we speak, the colour of our skin, or the gods we worship.

In Trump's America, we live in fear.

They have proudly stated their intent to impose religious litmus tests on their judicial nominees, dismantle tax laws to allow evangelical churches to more directly meddle in politics, and use the bully pulpit of the White House to advance a Christian worldview.

In Trump's America, we can only pray a certain way.

Perhaps most significantly, Donald Trump believes -- and has demonstrated through his words and actions -- that in his America, women exist solely as objects for his gratification, not as equals in society.

The misogyny, vulgarity, and aggression he has shown throughout his life, including on the campaign trail, do not represent our community's values.

In contrast to Donald Trump's lack of experience and xenophobic, racist, and misogynist views, Hillary Clinton is the candidate our community deserves and needs.

As first lady, US senator, and secretary of state she helped forge deep ties with India and the Indian Diaspora, and has demonstrated the strength, steadiness, and tenacity required of our commander-in-chief.

She believes in an America that includes all of us, regardless of where we came from, who we pray to, or who we are.

She will fight for comprehensive immigration reform, quality education, affordable healthcare, opportunities for innovation and entrepreneurship, and equality for women and girls.

While Donald Trump promotes himself, Hillary Clinton believes that we are stronger together.

Given the disdain Trump has shown for our community's values and experiences, it is disappointing that a handful of wealthy, conservative donors invited him to address their friends last weekend.

Trump may very well leave that event thinking we are all wealthy doctors, lawyers, and bankers eager to hand over a cheque in exchange for a handshake and photo. But our community has a far more valuable tool at our disposal: Our vote.

This November, we have to exercise that right.

We must unleash this power in swing states including Nevada, Virginia, and North Carolina, which are seeing the fastest Asian population growth, including some localities where we comprise more than 10 percent of the population.

This election is about the fundamental direction of our country and the future of our communities. Its impact will ripple from immigration to jobs to education to healthcare.

When Trump says his favorite phrase, 'believe me,' we do. We believe that his vision for America runs contrary to our values.

We believe that his policy positions present a generational threat to opportunity, freedom, and justice for our communities.

And we believe that we can stop him in his tracks -- if we get out and vote.

Please do not let Donald Trump steal America away from us.

Mira Patel is the former Senior Advisor for the US Small Business Administration and former advisor to Secretary Hillary Clinton. Gautam Raghavan served as President Barack Obama's liaison to the Asian American & Pacific Islander community from 2011 to 2014 and at the US Department of Defense from 2009 to 2011.

IMAGE: 'I am a big fan of Hindus and India,' Donald Trump told the 5,000-strong audience. Photograph: Paresh Gandhi 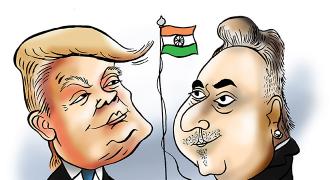