'The real problem of joblessness and democratic politics is happening here in India. And it is happening now, right before us,' says Aakar Patel.
Illustration: Dominic Xavier/Rediff.com 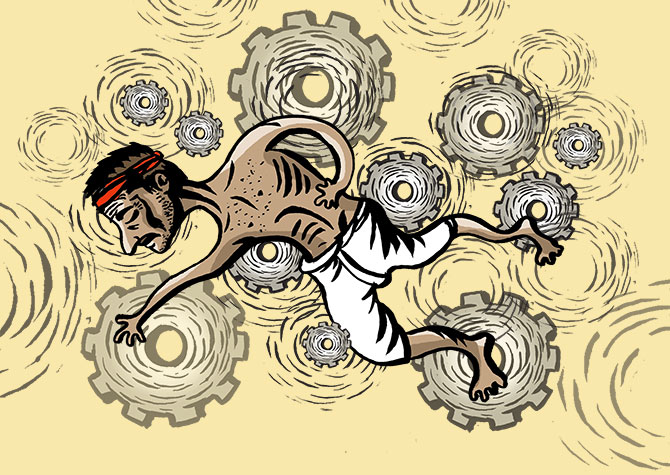 The first never happens, because Washington is the capital of a great republic which is over 200 years old.

It is not a city that is awaiting a saviour and any drastic change, even if possible, would likely be a change for the worse.

'Putting America first' is a meaningless slogan because it assumes previous presidents have put America second or third, which they have not.

Henry Kissinger, Richard Nixon's secretary of state, said that all foreign policy was actually domestic policy. What he meant was, America fought wars abroad in response to domestic demands.

And so it is unlikely Donald Trump will be able to change much in that sense either.

He will bring American troops back from wars that cannot be won, but he will not be the first president to do that.

The third promise is the most interesting one because we are often told that the real subject of elections in America is jobs and the economy.

Trump's vote base is white men with blue collar jobs. This means those people who work with their hands.

Henry Ford began the tradition of Americans with such jobs becoming a part of the middle class, with his affordable cars which even those who assembled them could buy.

I lived as a student in Janesville, Wisconsin, 30 years ago and one of the families I stayed with, the Johnsons, belonged to a man who had been assembling wheels on cars for decades. That was the only skill he was trained in.

He had built a nice house with the money he earned through labour and put his children through a good education. That plant had been started in 1919 and it had more than 5,000 employees.

It shut down in 2009 because it is cheaper to assemble cars in China and South America because the labour costs are lower.

Today, China and South America and India have also begun losing such jobs because mechanisation and automation are becoming so efficient that it is cheaper to replace even the low cost labour in these countries with technology.

Manufacturing is moving back to America but it is labour-less manufacturing.

In America, there has been plenty of time for those who have been in blue collar families to receive the benefits of high wage labour. To some extent this is also true of China, where the per capita income is about five times more than ours.

The real problem of joblessness and democratic politics is happening here in India. And it is happening now, right before us.

It was revealed a few days ago that Infosys had fired 8,000 workers because of automation.

This was an unusual piece of information because for two decades the software firms of India have been hiring aggressively. That trend has ended, according to the companies, and they have now begun to downsize and build a smaller, more skilled work force.

They will no longer hire people in large numbers.

If this is the problem that even white collar and educated Indians face in the cities, what is going to happen of the hundreds of millions in the towns and villages? They are in trouble.

We must understand the nature of the protests across India on various issues as being born essentially of this unrest.

Whether it is the Patidars in Gujarat, the Jats in Haryana, the Marathas in Maharashtra, the main demand is of blue collar work that gives a respectable living wage.

This is impossible today and such jobs will never be available on a large enough scale in India or anywhere else in the world for that matter.

Economic growth happens when there is an increase in output either through the number of workers or an improvement in efficiency.

The problem in India is that there are too many unskilled workers with little education and ability to produce anything.

Merely low cost is not advantageous and no magic policy, slogan or logo will change that.

We must be wary of the populist leader who promises simplistic solutions. This is true as much in India as it is in America.

The world is complex and its economy has evolved in a particular way that cannot be changed by a genius individual.

This is why, ultimately, the promise Trump makes of putting Americans to work will be an empty one.

That will, of course, not stop the next president from making the same noises about changing Washington, putting America first and jobs. 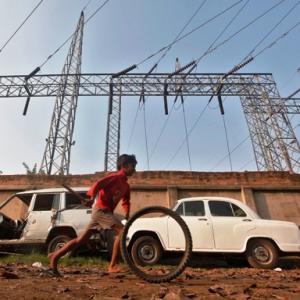