'Other than adding one more seat to the DMK’s LS kitty, there is no threat to the stability of the Edappadi government or party leadership just now.

'If anything, the bigger vote-share for AIADMK and the narrow margin of defeat would have enthused party cadres elsewhere about state elections due in 2021,' says N Sathiya Moorthy. 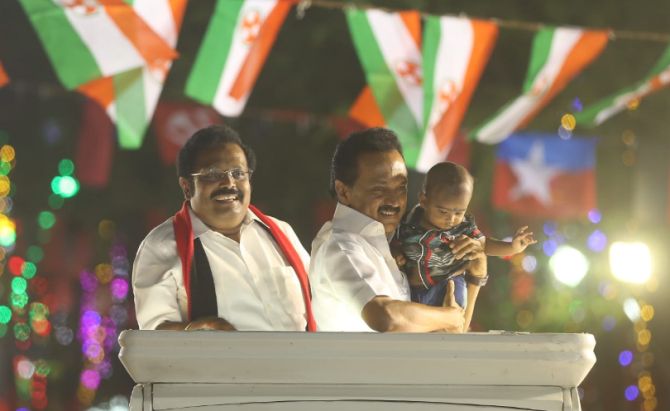 With the Opposition Dravida Munnetra Kazhagam candidate, Kathir Anand, managing to scrape through and win the Vellore Lok Sabha seat in the August 5 poll, the question arises if it owed near-exclusively to the consolidation of the substantial number of Muslim-Christian ‘minority votes’ in the constituency, against the ruling All India Anna DMK-Bharatiya Janata Party ruling alliance in the state and at the Centre?

The answer is yes, and no.

The minorities total around a third of the 10 lakh voters and are concentrated in Vellore, Ambur and Vanniyambadi assembly segments. As coincidence would have it, DMK’s Kathir Anand’s substantially higher vote-share in these three segments alone went on to wipe out his early deficit in the other three  assembly segments, namely, Anaicut, K V Kuppam and Gudiyattam (SC) segments.

In all three segments, AIADMK’s A C Shanmugam had relatively smaller margins over his DMK rival.

Vellore became the only LS constituency in the country to face cancellation in election 2019, after Election Commission officials recovered Rs 11.5 crores in smaller bundles from properties belonging to the DMK candidate.

Both candidates are big-time ‘education entrepreneurs’, where AIADMK’s Shanmugam is better known than the other. DMK’s Kathir Anand is the son of party strong man and treasurer, S Duraimurugan.

A C Shanmugam has been running a not-so-successful upper caste ‘Mudaliyar party’, named New Justice Party, supposedly a revived successor to the forgotten forerunner -- but it is not so, either. This time round, he contested on the AIADMK ticket and symbol. In election 2019, he was a part of the BJP-NDA, and lost.

Though the minorities did vote the DMK as has been their wont for decades now, there is nothing to suggest that the consolidation was specific to the instant talaq law or Monday’s scrapping of Art 370, which was also polling day in Vellore. So any assumption that there was a reverse consolidation of Hindu majority is also unfounded.

Both parties and alliances got the votes due to them, with the Pattali Makkal Katchi ally of the AIADMK having been able to transfer its substantial support base to Shanmugam in Anaicut, for instance. It was not the case in the April polls, elsewhere in the PMK’s ‘Vanniyar belt’ in the north and the west.

The argument still remains, if it was a let-down for the DMK after the big victories in individual constituencies in the April LS polls. Conversely, the question arises if the current polls can revive the sagging morale of the AIADMK, especially after the steep fall earlier? Again, the answer is yes-and-no.

Though the temptation is to assume that after a sweeping victory the same party would repeat the performance again soon thereafter, facts often speak otherwise. This owes to the voter sympathy for the losing party, and a thinking if they had punished them too much, going too far. That also seems to be the voter psyche in Vellore, as far as the improved AIADMK performance is concerned.

For the DMK, fighting a by-election against the combined might of the adversarial Centre and the state governments may not be a new experience. But the fact that almost every state minister was camping in the constituency, and had been specifically allotted to particular assembly segments and villages, for them to take care of the locals’ interests during campaign-time was a great disincentive (as always for the political Opposition in any state in any by-election).

Yet, this is the first time that an Opposition party in Tamil Nadu is winning a by-election, that too an LS seat, in nearly three decades. Although, strictly speaking, the high-profile RK Nagar bypoll in December 2017 was won not by the ruling party, but by its breakaway faction.

Neither side can rest on their laurels, whatever they be. From Vellore, both parties and their allies have to move on to by-elections in two assembly constituencies. The vacancy in southern Nanguneri constituency was caused after Congress incumbent H Vasanthakumar got elected to the LS from Nagercoil constituency, defeating incumbent Union minister Pon Radhakrishnan of the BJP by the highest of margins for the constituency. In Vikravandi in the northern region, DMK incumbent K Radhamani passed away a couple of months ago.

In the upcoming bypolls, the DMK may start off with a disadvantage, especially in Nanguneri. Local DMK cadres seem to want the party to field a candidate, which otherwise ‘belongs’ to the Congress ally. State Congress leaders have no clue or direction from the Centre, at least for now, after Rahul Gandhi quit as party president.

It is also a traditional seat for the Congress, which has more than a fair chance of winning the seat, though only in a coalition set-up.

It may not be a problem for the AIADMK, though the constituency falls in the southern region, which is purportedly under the control of deputy chief minister O Panneerselvam. However, Chief Minister Edappadi K Palanisami may come under pressure from others who want to defy OPS in the region, and field a candidate from the latter’s ‘faction’ (which otherwise is for real).

In the North, the DMK is on a safe ground, as the vacancy was caused by the death of a party incumbent. In the AIADMK alliance, the PMK especially has sworn to the combine even after the total defeat in the LS polls. It remains to be seen if the party will honour the pre-poll commitment from the LS poll, or would think about the assembly polls, due in 2021.

For both combines, especially in a closely-fought election of the Vellore kind, minor parties like actor Seeman’s Naam Thamizhar Katchi and Kamal Hassan’s Makkal Needhi Maiyam may hold a threat. The latter did not contest the Vellore polls, but the former did and polled nearly 27,000 votes -- which could have made a difference to the victory margin of the other two.

In the final analysis, however, other than adding one more seat to the DMK’s LS kitty, there is no threat to the stability of the Edappadi government or party leadership just now. If anything, the bigger vote-share for the AIADMK and the narrow margin of defeat would have enthused party cadres elsewhere, to conclude that there is still a lot of battle in them and left for the assembly polls, when held in 2021 -- provided the party leadership stands united, unless until now. 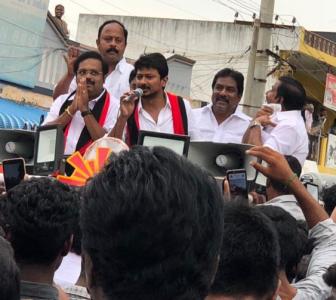 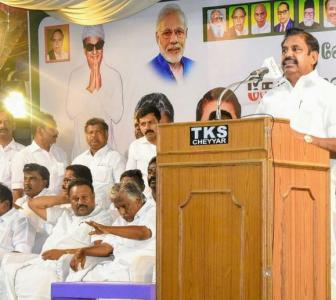 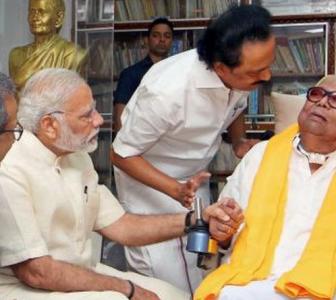 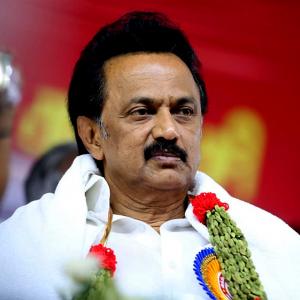 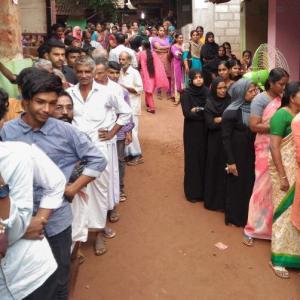