'It may take the AIADMK much more convincing than already, not only to try and bring around even the one-time Muslim voters of the party.

'More importantly, the party leadership may find it even more difficult to convince traditional party voters and cadres, who had admired Jaya’s nonchalance to the party and leader ruling the Centre,' says N Sathiya Moorthy. 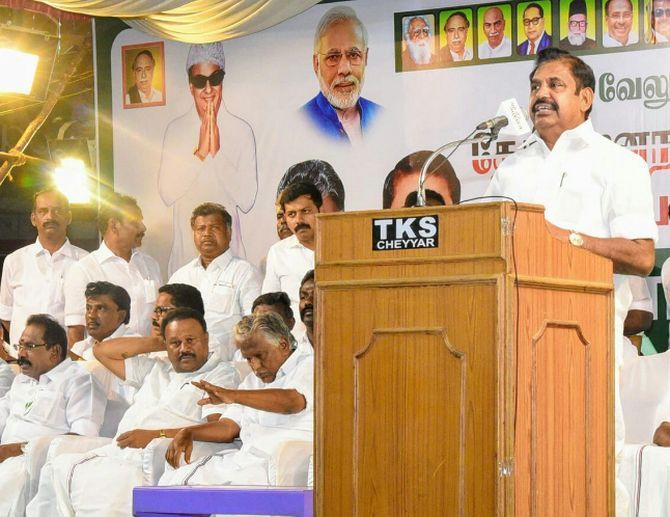 With the cancelled elections to the Vellore Lok Sabha constituency now scheduled for August 5, all eyes are on the voters, who could either reaffirm the state's poll behaviour in the general elections earlier this year, or give fresh hopes to the ‘ruling’ alliance of the BJP at the Centre and the AIADMK in Tamil Nadu, that the earlier verdict was an aberration.

Fresh elections, as against ‘by-elections’ or ‘countermanded polling’, became necessary in Vellore after authorities recovered around Rs 11 crores in small bundles/parcels for ready distribution to cadres down the line. Officials declared that the seizure was made from properties identified with Dravida Munnetra Kazhagam candidate Kathir Anand.

In a way, the DMK did not deny the seizure. However, they also pointed to state chief electoral officer Satya Brata Sahoo confirming what sounded like a bigger seizure from a warehouse purportedly owned by a business contact of a TN minister on camera one day -- only to deny all knowledge soon thereafter.

With this all, Vellore became the only LS constituency out of a total 542 in the country where the EC officially cancelled the election under relevant laws. Now with the campaign for fresh polls already on, the EC has reported ‘unaccounted’ seizures in cash and jewellery, valued at over Rs 3 crores.

For the August 5 polls, the two main rivals from the main elections have fielded the original candidates -- Kathir Anand (DMK) and A C Shanmugam, on All India Anna DMK symbol.

Kathir is the son of DMK veteran and party treasurer S Duraimurugan. Actor-politician Seeman’s Naam Tamizhar Katchi too is in the fray, but counterpart Kamal Hassan’s Makkal Needhi Maiyyam has stayed out -- even though both parties had polled over three per cent vote-share each, in what ended up as a wholly one-sided election in April this year.

Both main candidates are acknowledged to be rich, and are also ‘education entrepreneurs’ in their own way. Shanmugam is also the founder-president of the New Justice Party, a poor shadow of the original ‘social justice’ mascot of the Dravidian movement in the state. While the party has been around for two decades, unlike other ‘caste’ parties, the NJP has failed miserably, despite being in rival mainline alliances or contesting independently.

On the record, the DMK cadres are directly in the field, egged on also by the party’s new-found ambition to end the LS poll tally from the state at 38-1, with the lone Theni seat already gone to AIADMK’s Raveendranath Kumar, son of deputy chief minister O Panneerselvam. Shanmugam’s party does not have many cadres anywhere, inside the constituency or outside, and he is depending on the local AIADMK leaders and cadres whom he has been enthusing to work for him.

Shanmugam, or ACS as he is known, caused a little sensation at poll cancellation last time, when he wept before TV cameras and declared how all his efforts had gone waste for no fault of his. He also moved the courts, asking why the elections could not proceed without the DMK rival, if the latter alone was found to have violated the laws.

The courts did not yield. There was also another question, since, about the wisdom of the EC permitting the same candidate, whose offensive conduct had caused poll cancellation, to contest again without any punitive action against him. The EC seems to have concluded that these are larger issues, for which the response might lie elsewhere -- say, either the legislature or the judiciary.

However, the chances of any of the losers or even a ‘voter’ in the constituency moving the courts are very much on cards, if Kathir Anand were to win this time. Needless to point out, his/her lawyers would cite the earlier raids and seizures and ask the ‘logical question’, why cancel the vote if the same candidate were to be allowed to contest again....

It was a question that was raised in the R K Nagar assembly by-election in Chennai suburbs, ordered after the death of AIADMK chief minister Jayalalithaa. There too, the ‘offending’ candidate, T T V Dhinakaran, was allowed to run a second time, despite the earlier cancellation owing to ‘corrupt practices’ attributed to his campaign.

There was/is one difference. In R K Nagar, Dhinakaran was not directly blamed for the ‘corrupt practices’, after tax authorities reportedly recovered a list of money donors, all of them powerful AIADMK ministers, from one of them. The figure totalled RS 80 crore. In Vellore, the candidate’s name got directly involved in the seizures. However, at the end of it, Dhinakaran won the R K Nagar by-poll with a huge margin, and as an Independent, without the backing of either of the two other post-Jaya party factions.

For the two main candidates in Vellore, respective party/alliance chiefs have already done their rounds of campaigning. As with the general elections (when by-polls were also held for 22 assembly seats), AIADMK chief Minister Edappadi has been put on the defensive by rival DMK supremo M K Stalin’s succession of accusations. The AIADMK is thus on a ‘denial’ mode all over again.

Chief among Stalin's insinuation is that the AIADMK in the state is acting as the ‘B-Team’ of the ruling BJP at the Centre, with its ‘anti-minority’ Hindutva agenda. On the administrative front, Stalin seems convinced that the Modi 2.0 BJP-NDA dispensation at the Centre is out also to take away all rights and powers of the Dravidian state, and upset the federal structure of the Constitution, which has worked well for the nation thus far.

Leave aside the fact that such a refrain did have a huge positive response during the main elections, there is an added angle between then and now, especially with the Vellore constituency in mind. The constituency has a substantial Muslim population, traditionally into hide and leather business, in Vellore and Ambur assembly segments.

While traditional wisdom should dictate that they would vote anti-BJP, and by extension anti-AIADMK, and hence also against NJP’s Shanmugam, the intervening maiden session of the two Houses of Parliament may have set them thinking. This does not mean that they may vote for Shanmugam, but they may still not vote for the DMK wholesale.

This owes to the DMK voting for the National Investigation Agency (Amendment) Bill, which empowers the authorities to proclaim ‘individuals’ as ‘terrorists’ for the purposes of the law. Though anti-India terror leaders in Pakistan and/or their acolytes in Jammu and Kashmir are seen as early candidates for such designation, the Muslim community and political leaders are peeved at the possibility of ‘misuse’ against ‘innocent youth’ of the community in the state.

They cite the ongoing NIA raids in various places across the state, in the aftermath of the ‘Easter Sunday serial blasts’ in neighbouring Sri Lanka. Though no specific case of ‘harassment’ of the Muslim youth has been brought out thus far, community leaders have cited their ‘experience’ with the arrests, interrogation and incarceration of many Muslim youth in the aftermath of the 1998 ‘Coimbatore serial blasts’, which BJP president L K Advani narrowly escaped.

With a Muslim political alliance team calling on DMK’s Stalin post facto, he has regretted the party voting for the NIA Amendment Bill without understanding its full implications.

However, on the ‘instant triple talaq’ Bill, the DMK stood firmly against the same while the AIADMK voted for the same after condemning it in no uncertain terms during debate. In the Lok Sabha in particular, AIADMK’s lone MP, OPS’s son Raveendranath Kumar, voted in favour of the two Bills.

When quizzed by media persons in Chennai later, state minister D Jayakumar, who is seen as the ‘conscience-keeper’ of Chief Minister EPS, pooh-poohed the lone LS vote and said that they would correct it. However, in political terms, the damage had been done, even more so as the AIADMK did not vote against the Bill in the Rajya Sabha but only abstained.

It may now take the AIADMK much more convincing than already, not only to try and bring around even the one-time Muslim voters of the party. This is more so because on the NIA, community leaders do concede that there are ‘errant elements’ who needed checking, but “it is not the case with triple talaq”.

More importantly, the AIADMK leadership may find it even more difficult to convince traditional party voters and cadres, who had admired Jaya’s nonchalance to the party and leader ruling the Centre. As some of them recall, even while knowing that BJP’s Modi might be the post-poll PM in 2014, Jaya had coined the inimitable slogan challenging him in Tamil Nadu.

The slogan read, “Modi-ya, indha Lady-a?”, asking the voters if they wanted to vote for Modi or ‘this lady’, referring to herself. In the end, Modi became prime minister alright, but Jaya’s AIADMK won 37 of the 39 LS seats from Tamil Nadu.

Ironically, the louder Jayalalithaa shouted her anti-BJP credentials, louder her perceived identification with the ‘Hindutva forces’ became -- as much in the eyes of the ‘minority voters in the state as with the numerically smaller, pro-BJP upper-caste voters.

In a way, it is the capacity of the latter that made Jaya look more ‘anti-minorities’ than the BJP at times, with the result, until death, she was unable to recover the party’s traditional share of minority votes.

In between, Jaya had increased the minority votes in elections 2001 to the state assembly, which she swept against the ruling DMK, but of course with support from the anti-BJP Congress, breakaway TMC and the two communist parties, among others.

With the successor EPS-OPS leadership of the AIADMK, no one is bothered to distance the party from the BJP in ideological terms, with the result even inevitable short-term poll alliance with the party has come to acquire the image of a permanent political alliance.

Thereby hangs a tale -- and such a perception can impact on minority voters in Vellore, without a counter-poised ‘majority vote’ for the candidate on the other side. That was also the case in the LS polls in the state earlier this year -- though ‘hard Hindutva’ alone was not the cause for overall ‘Tamil voter-preference’ at the time. 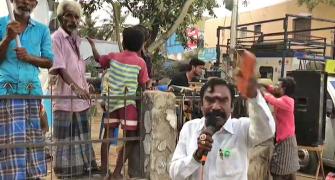