Does IAF need this self-congratulatory nonsense? 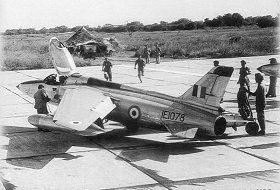 As the IAF kicks off another round of myth-making -- launching a year-long commemoration of the 50th anniversary of the 1965 India-Pakistan war -- it is worth remembering how little there was to celebrate in those September days when the underdog PAF got the better of the IAF in raid after raid, dogfight after dogfight, says Ajai Shukla.

A popular tale -- apocryphal but grounded in truth -- recounts an air force student at the National Defence College asking the librarian where he could find a book on the war history of the Indian Air Force. Without looking up, the librarian responded, "In the fiction section, Sir."

Image: A Gnat being readied for take off. Photograph courtesy: Bharat Rakshak

On September 5, the IAF will launch a year-long commemoration of the 50th anniversary of the 1965 India-Pakistan war, culminating in September 2015, the actual anniversary.

There are at least three reasons to stop this self-congratulatory nonsense.

First, as the centenary of World War I has illustrated, countries have fought terrible wars without feeling the need for a year-long commemoration.

Second, by every independent account the Pakistan Air Force convincingly got the better of the IAF.

Old-timer pilots frankly confess that 1965 was a learning experience, not a victory.

Third, and importantly for military history aficionados, no fighting happened on September 5. Why is the IAF commemorating this day?

The answer is simply that we care little for military truth.

We have won battles, even wars, handily; and sometimes just by the skin of our teeth.

But our voluminous regimental histories firmly reject the gritty reality of war, painting every engagement in the unsullied colours of heroism and triumph.

Image: Then Air Chief Marshal Arjan Singh with then defence minister Y B Chavan inspect a downed Pakistani Sabre aircraft at an air base near Delhi. Kind courtesy: Marshal of the Air Force Arjan Singh

As the IAF kicks off another round of myth-making, it is worth remembering how little there was to celebrate in those September days when the underdog PAF got the better of the IAF in raid after raid, dogfight after dogfight.

This comes not from the fevered imagination of Pakistani jingoists, but from the official Indian history of the 1965 war, which was endorsed on December 31, 1992, by then defence secretary N N Vohra.

Yet it was held back and remains classified even today, further burnishing its credentials. (Interested readers can access it here).

To set the stage, the PAF in 1965 was a well-trained, American-supplied air force of 17 squadrons (12-16 aircraft per squadron), which included a squadron of F-104 Starfighters, then the most formidable fighter in Asia; eight squadrons of F-86 Sabres; two squadrons of highly regarded B-57 bombers; and a high-altitude reconnaissance squadron of RB-57, including the secret RB-57F photo-recce aircraft that flew at 70,000 feet, beyond the reach of Indian fighters and anti-aircraft weapons.

The PAF imaginatively used its two squadrons of light trainers for reconnaissance and ground attack.

The IAF, in contrast, had 48 squadrons, almost thrice the PAF's strength, although six Vampire and three Toofani fighter squadrons were clearly obsolescent.

Furthermore, India retained a number of squadrons in the east to guard against China.

With Indian quantity offset by the PAF quality, the decks were evenly stacked.

Even so, the PAF was clearly superior in its training and operational doctrines.

The held-back history says, 'Compared to (the PAF's) elaborate and determined plan of attack, the IAF, it seems, operated on the basis of ad hoc decisions, and in the hope that full-scale war would simply not come.'

On September 1, 1965, the IAF launched its first strikes against a Pakistani invasion at Chhamb, near Jammu.

Foolishly, 12 obsolescent Vampires and 14 Mystere fighter-bombers were thrown in, which began shooting up Indian tanks from 20 Lancers, which was opposing the Pakistani advance.

Twenty Lancers officers recount their relief when the PAF Sabres swooped down on the IAF, shooting down four Vampires.

A shocked IAF grounded its Vampire and Toofani squadrons, reducing its strength by one-third. Clearly, this was not a day to be celebrated.

After a quiet September 2, the IAF claimed its first kill on September 3, when Squadron Leader Trevor Keelor, flying a Gnat fighter, hit a PAF Sabre.

The IAF, in need of something to celebrate, announced a 'kill' and awarded the pilot a Vir Chakra.

In fact, the IAF knows that the Pakistani pilot, Flight Lieutenant Yusuf Ali Khan, nursed his damaged Sabre back to the Sargodha air base.

Not until September 4 did an Indian pilot, Squadron Leader V S Pathania, shoot down a PAF Sabre. Perhaps that is the day to commemorate.

The next day, September 5, saw absolutely no action.

On September 6, the PAF made its big move, launching multiple strikes against IAF bases to destroy aircraft on the ground and whittle away the IAF's numerical superiority.

Indian accounts say 10 IAF fighters were destroyed on the ground at Pathankote, with another three damaged.

Separately, the hunters became the hunted, when two of the four IAF Hunter fighters patrolling over the Halwara air base to ambush incoming Pakistani fighters were shot down by the Sabres when they arrived.

Alongside the PAF air strikes, Pakistani commandos were airdropped around Indian air bases to launch attacks on the ground.

Fortunately, the villagers around Pathankote, Halwara and Adampur captured scores of disoriented commandos, who had little idea of what to do after reaching the ground.

September 6 was also when Indian troops crossed the border at Amritsar and, taking the Pakistan army by surprise, reached Lahore's outskirts.

The official history recounts that this was achieved without IAF support, a devastating accusation endorsed by noted historian, John Fricker.

In his authoritative work, Battle for Pakistan: The Air War of 1965, Fricker writes: 'Incredibly, the Indian offensive struggled on without any form of air support, and the IAF did not challenge the repeated ground attack sorties flown without loss by the PAF throughout the day.'

That evening, battered by the PAF and without a clear plan, Indian troops pulled back from the brink of a war-winning victory -- the capture of Lahore.

September 7 saw a debacle in the eastern theatre, where the PAF had only a single squadron of Sabres.

Early morning IAF raids on Chittagong and Jessore achieved nothing.

However, a retaliatory PAF raid devastated the IAF's Kalaikunda base, in West Bengal, destroying 12 aircraft on the ground.

Thereafter, both air forces went slow, husbanding their strength for a long war.

Then the IAF destroyed 43 PAF fighters, while losing 59 of their own.

The PAF celebrates September 6 -- when it ravaged Pathankote and saved Lahore -- as 'Defence of Pakistan Day.'

What does it say about the IAF that it is commemorating September 5 -- the day when nothing happened?