The wars of the future will be fought over water and if they occur on large scale, will be far more devastating than any we have seen yet, says Shreekant Sambrani. 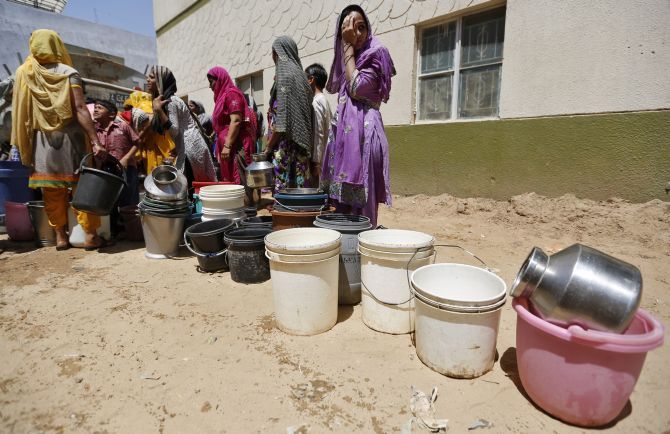 IMAGE: Residents wait for their turn to fill their containers with water, next to a municipal corporation water tanker in Maktampura neighbourhood in Ahmedabad. Photograph: Amit Dave/Reuters

Just think: 6 million litres of water sets off fierce wars of words and litigation in a country that receives 400 million times that amount (2.4 trillion cubic meters, the normal being 3 trillion) as precipitation even in the worst drought years. Allowing for 90 per cent of it to be lost through run-off to the sea or evaporation, the quantum of water the Indian Premier League will likely use in Maharashtra is one part of 40 million available to India in the worst case. Why then the controversy?

Because of the supposed ostentatiousness of the use. The drought in many parts of Maharashtra (as indeed elsewhere in the country) is fierce and the monsoon is still a good 10 weeks away. The misery of thirsty regions is heartbreaking and a game of cricket on lush green grounds could be an obscenity. Yet, it is also clear that the savings effected by forcing the IPL out of the state would be the proverbial drop in the ocean of requirements. This is the diamond-water paradox staring us in the face.

This is not the first instance of competing demands for scarce water coming to a head. I had referred to water wars in Sri Ganganagar and Bundi in Rajasthan seven years ago. Since monsoons will be increasingly variable due to global warming, it will certainly not be the last. If anything, far more strenuous situations will be the order of the day in future. So whatever the judiciary decides in the present case, the time for serious solutions is now, with the water clock ticking at 11:59 pm.

Three sets of actions, ranging from the immediately practicable to the very difficult are suggested, not as alternatives, but as an entire package.

Set and practise end-use priorities and follow differentiated practices: Droughts do not occur suddenly; in fact, they are a long time coming and allow more than adequate time to set alleviating measures in action. It is another matter that we do not act in time. The much-maligned India meteorological department had warned of an impending poor monsoon as early as April last year and even revised its estimate of the likely shortfall of rains in July-August. State and central governments did not have to wait until the onset of the summer and rebukes from courts to put in motion plans to relieve the water stress, at least as far as drinking water is concerned.

California faced two long droughts in 2014 and 2015. Right from the early days, the state set enforced strict norms for all water use, which became ever more stringent as the drought worsened.

We, of course, will never abide by such controls, just as we do not follow most traffic rules. Our situation is more like that of Murcia in southern Spain, which has become nearly arid following indiscriminate water use because of resorts and growing water-intensive crops. The New York Times observed that 'though southern Spain has long had elaborate systems for managing its relatively scarce water, today everyone, it seems, has found ways to get around them' (external link, here).

And yet, there are a whole slew of things we could do, with relative ease.

The first is to set a priority for water use, according to states, regions and cities. These would reflect the values that specific agglomeration attaches to the specific uses of water. That would in turn lead to both pricing of water as well as a sliding scale of reductions to be put in place at times of water shortages. The highest priority use would attract the lowest tariff and suffer the least cut. The lowest priorities, such as watering the cricket stadia, would pay a tariff several times higher and would receive water up to a prescribed limit according to a pre-arranged, inviolable schedule. The possible cuts will be known in advance and not imposed at the last moment. That would put the tanker mafia doing business in places like Mumbai, most likely with water diverted from municipal sources, or depleting the ground water, out of commission.

Low priority users could be encouraged to seek legitimate additional sources. Desalination of sea water in coastal locations could be used by resorts and sports facilities. This is not practised on a large scale at present because the cost is considered unaffordable. That would be so for ordinary use, but these costs would be well within the reach of star hostelries and sports tournaments. In fact, a case can be made that many elite establishments in south Mumbai could be supplied high-cost desalinated water freeing supplies meant for them from reservoirs for higher priority uses elsewhere.

A concept of water-wheeling, along the lines of power-wheeling, needs consideration. Low priority users could be provided water on the condition that they augment the region’s resources elsewhere by, say, twice the amount they are provided by setting up facilities for desalination, or building weirs and storage structures, or some other technically possible variant. The practice of compensatory afforestation already exists which permits cutting of trees on the condition of planting and raising twice as many on the same plot or some other designated location.

Use water wisely: Distressed or not, agriculture is the largest user of water and also the worst offender of its wastage. As this column among others has pointed out, growing one kilogramme of rice uses up 5,000 litres or more of water and one kilogramme of sugar some 2,000 litres. Yet, we persist with such inefficient use of water and even resort to draining precious ground water in these pursuits. The surplus rice or sugar are sought to be exported, which is tantamount to exporting water.

The need for crop diversification cannot be over-emphasised. Shift away from flood-irrigated paddy and water-intensive sugarcane are both possible and desirable, but do not happen partly because farmers do not accept them as they perceive alternatives to be risky and partly because of powerful political interests vested in these crops. Amarinder Singh’s efforts to diversify Punjab agriculture got nowhere because of strong political opposition. Sugar barons of Maharashtra and politicians in the north fight every effort to reduce the importance of the crop in their regions.

The prime minister speaks of taking water to every field. The present budget lays greater stress on irrigation. But if there is little water to be delivered or what is delivered is wastefully used, such measures would only add to the rural distress, instead of relieving it. More crop per drop was a catchy slogan in the election campaign, but it must become a practicable idea, with adequate back-up alternative, water-conserving cropping patterns, and possibly mandatory use of techniques such as drip irrigation. The devil in this instance is literally in the detail. But as is the case with many an excellent idea, detail is what interests us the least.

Use basins wisely: The plight of Marathwada, which suffered a 40 per cent shortfall last monsoon, is highlighted presently, but the adjoining Telangana and most of Gujarat also had similar deficits, and Punjab and Haryana even worse, but they seem to be coping with them. The obvious reason is that all these have access to copious river basins.

Even as large a basin as that of the Narmada fills up with good rains of not much more than a week, which almost never fail to happen. With dams and reservoirs in place the stored water is the lifeblood for large parched regions in the long dry periods ahead. The problem is creating storage structures and far more importantly, transferring surpluses.

We may have run out of geography for large dams, but much scope still exists for riverbed weirs and smaller bunds at various locations in almost all river basins. Creating an inventory of these must be of the highest priority.

Transferring surplus even within a region or a state is neither easy nor cheap. Gujarat has set an example of taking the Narmada waters to north Gujarat and Saurashtra through canals and large pipelines, unmindful of the cost, as an essential action. Andhra Pradesh has also shown imagination in creating local linkages and saving water at the head end, which is useful further downstream where it is badly needed.

That consideration must prevail elsewhere as well. Many such intra-regional possibilities surely exist, which need to be explored and followed up on a priority basis.

Much serious thought has been expressed against a large-scale linking of river basins as being uneconomical. But in 2009 floods in the Krishna basin, then described as once in 10,000 years situation, caused weeks of submergence and untold damage in both southern Maharashtra and adjoining Karnataka. That water could have been transferred elsewhere had such links existed. When such exceptional situations or calamitous droughts occur, as they will with increasing frequency in future, can or should normal cost-benefit analysis prevail?

The politics of inter-regional transfer is altogether another issue. Intractable inter-state water disputes threaten to rend the national fabric even at present. States threaten not to abide by even Supreme Court judgments. The fractured polity offers no solution and the kind of wisdom exercised by the Constituent Assembly is not in evidence. So however desirable such a strategy may be, we are faced with the prospect of having to make do with the second best or something far inferior.

A comprehensive water policy comprising measures such as these would be far more useful than the symbolic knee-jerk closure of public swimming pools or outrage over IPL games at times of drought. These cathartic measures achieve little of significance, as Surjit Bhalla has recently argued (external link, here).

The point to note is that there are multiple possibilities of augmenting water supplies, which are not all exploited today for reasons of cost. By adopting a policy and practices framework as suggested here, that hurdle could be overcome at least in part.

The diamond-water paradox needs to be stood on its head to serve the true needs of the society. The suggestions above are meant to do precisely that.

One last caveat: Whatever is the outcome of the present concerns must last beyond the next good monsoon. Much energy and attention was given to rainwater harvesting, percolation and water conservation in the wake of the 2009 drought. Looking to the present, we might be tempted to believe that that never occurred!

We cannot wait for the faucets to run dry before taking action. The wars of the future will be fought over water and if they occur on large scale, will be far more devastating than any we have seen yet. 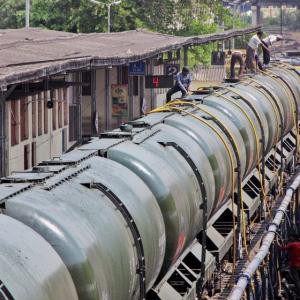