When almost the entire political class was engrossed in the Bihar polls, the Congress shahzada was holidaying in a hill station.
As the Bihar contest and other by-elections have shown, a large number of states have become Congress-mukt, fulfilling the Hindutva brigade's dream, notes Amulya Ganguli. One of the defining images of the Bihar elections was the surging crowds at Tejashwi Yadav's rallies, signifying the emergence of a new leader.

Another was a picture of Rahul Gandhi chilling out on the balcony of his sister Priyanka's house in Shimla, reinforcing his reputation of being a part-time politician.

As a BJP honcho pointed out, when almost the entire political class was engrossed in the Bihar polls, the Congress shahzada was holidaying in a hill station.

True, the shahzada did campaign in Bihar, but it attracted far less attention, and crowds, than the meetings of the other dynast which were the first signs of a change.

Undeniably, the change wasn't big enough to unseat the ruling alliance, but it nevertheless marked the beginning of a new phase in Bihar, and perhaps even national, politics with the rise of a politician who has been advised by the Congress's Digvijay Singh to move to the Centre since Bihar is too small for him.

The shahzada, on the other hand, and his party will now have to undertake a gloomy introspection about the aging Grand Old Party's current predicament when it is being castigated for having pulled the Tejashwi-led Mahagathbandhan down by contesting more seats than what should have been allotted to it.

If the Congress hadn't lost 51 of the 70 seats where it fought, the alliance would have fared much better.

It isn't only in Bihar that the Congress has shown that it is well past its prime, the party has fared poorly elsewhere, too, such as in Madhya Pradesh and Karnataka.

In both states, the Congress was first outwitted by a more resourceful and ruthless BJP to lose its state governments and has now lost 19 seats out of 28 in the Madhya Pradesh by-elections and both the seats in Karnataka.

The BJP's success in the by-elections -- it won 41 seats out of 59 in 11 states -- has further underlined the magnitude of Tejeshwi's achievement.

It is clear that he was trying to roll back a tide all on his own and succeeding to a considerable extent even after being mocked -- and not without reason -- for the 'jungle raj' of his father Laloo Prasad and mother, Rabri Devi, when they ruled over Bihar between 1990 and 2005.

It is difficult to think of any other 31-year-old school dropout who could have achieved this feat.

In contrast, in addition to what happened in Madhya Pradesh and Karnataka, the Congress has come a cropper in Gujarat by losing all eight seats in a state where it showed some spark of life in 2017 when it brought down the BJP's tally in the assembly elections from 115 seats to 99.

For all of Rahul Gandhi's tweets on the economy and Chinese intentions, Narendra Damodardas Modi is going from strength to strength while the Congress is sliding downhill.

The party's present condition is probably more precarious than ever before because far from Rahul being seen as a future prime minister, as allies like the DMK's M K Stalin once did, the party is being perceived as a liability.

As the Bihar contest and other by-elections have shown, a large number of states have become Congress-mukt, fulfilling the Hindutva brigade's dream.

What is more, the Congress itself appears to be helping in achieving this dream by its lack of enterprise, ideas and imagination.

Not surprisingly, its knee-jerk reaction to the latest setback was to blame the EVMs.

Aware that the non-BJP parties have also won a number of seats, a section of the Congress modified their targeting of the EVMs by speaking of selective tampering.

If only the party looked inwards at its own leaders and organization instead of seeking explanations for its failures elsewhere, it might have embarked on the path of recovery.

Otherwise, its future looks even more bleak than when its tally of seats in Parliament dropped to double-digit figures. 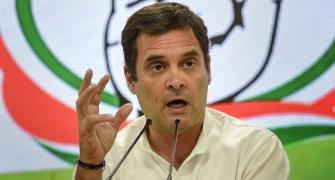