Congress has NO CLUE what Muslims WANT

By Ehtasham Khan
March 09, 2012 16:07 IST
India's grand old party is still not able to comprehend what the country's largest minority group wants. What their issues are. What their demands are. With whom they want to associate. And what their needs are, says Ehtasham Khan

Union Law Minister Salman Khurshid was one of the most sought after men in the Congress party as the counting of votes began in India's most populous and politically crucial state of Uttar Pradesh on March 6. The suave, modern and "supposedly" powerful minister in Prime Minister Manmohan Singh's Cabinet was the Muslim face of the Congress party in the state elections which, according to 2001 records, has a sizeable 18.1 percent Muslim population. Muslims were assumed to have tilted 130 out of 403 assembly seats in the state.

The media had camped outside Salman's Kushak Road residence as early as 7 am although the counting of votes would begin after an hour. It took nearly six hours for the minister to speak to the media. Putting on a bold face, he accepted the defeat. It was not just his party's loss but a personal one too. His wife Louise Khurshid stood fifth in Farukkhabad, getting just around 22,000 votes. It rarely happens that a Union minister's wife gets hammered so hard.

Being a law minister at the Centre, Salman brought a lot of colour into the election campaign by making several remarks that irked the Election Commission. Contrary to his "modern" image, Salman announced a separate quota for Other Backward Caste minorities within the 27 percent OBC quota in government jobs and educational institutes. Did the magic work or did it backfire?

When this correspondent put this question before the minister, he became furious. "I will keep speaking about minority quota. Or do you want to burn the Sachar Committee report? I said just 4.5 percent reservation (for OBC minorities). Why don't you ask Mulayam Singh? He promised 18 percent," the minister replied in anger.

As the camera was switched off, the minister shouted again. "Have you done any analysis? How can you ask such question?" If this was not enough, Salman went ahead:  "What do you want? Do you want me to speak for Kasab (the Pakistani national accused in the Mumbai terror attacks) and Osama (bin Laden)?"

The minister apparently knows the ground reality. But his reference to Kasab and Osama gave me an outline of the worldview of the minister and his party with regard to Muslims in India. The grand old party is still not able to comprehend what the country's largest minority group wants. What their issues are. What their demands are. With whom they
want to associate. And what their needs are.

To be very fair to the minister, his anger was very unlike the usual soft and sophisticated Oxford educated Salman Khurshid. The last time I saw him angry was in 1995 when Salman was the chief guest at the founder's day celebrations at Aligarh Muslim University. I was in first year of college. With the memories of the Babri Masjid demolition still fresh, the AMU students hooted Salman as he came on the dais. Seasoned politician and an ardent speaker that he is, Salman kept everything under control, diverted the discussion to Kashmir and urged students to come along with him to restore peace in the Valley. "Aaiye humsab sirpar kafan bandhlen aur Kashmir chalen (Come let us prepare our coffins and go to Kashmir)," he said.

Salman used emotions and rhetoric in 1995 and also in 2012. Time has changed. But not Salman. And neither has his party.

In the 2012 Uttar Pradesh elections, the media and the Congress party conveniently and tacitly projected Salman's OBC separate quota demand for minorities as quota exclusively for Muslims, and not for all minorities. Many people were confused about what Salman exactly said. Even many enlightened people were seen asking if he was advocating for quota for Muslims or all minorities.

When this magic didn't work, Salman went ahead challenging everybody to hang him for speaking about the minority quota. The learned lawyer was aware he was not going to be punished for his rustic election speeches. He, in fact, was to be rewarded with undue publicity. All is fair in love, war and politics after all.

Salman's aim was the large chunk of Muslim voters in Uttar Pradesh. Although it is not possible to determine to which party the majority of Muslim voted, a clear trend emerges when one looks at the numbers in the 21 minority-concentrated districts of UP. These are identified as those where at least 25 per cent of the population comprises minorities.

There are 133 such seats in the state. The Samajwadi Party got 65 out of this 133. The Congress won just 10. The Bahujan Samaj Party bagged 30, while the Bharatiya Janata Party got 22 and the Rashtriya Lok Dal three.

The Congress has 22 Lok Sabha seats from Uttar Pradesh. Not a single Congress candidate won from these constituencies, while the SP managed to win 15 seats from this belt.

Salman still believes he knows the ground reality. So does his party president Sonia Gandhi. After a two-and-a-half-hour meeting with Congress office-bearers, Gandhi blamed too many leaders and problems in ticket distribution as the reasons for the Congress's debacle.

Outgoing chief minister Mayawati, however, was more candid. She said Muslims voted for the Samajwadi Party due to which her party lost the state elections.

So what went wrong for the Congress party that it lost even Azamgarh where party incharge Digvijay Singh shed crocodile tears over the Batla House encounter?

The Congress as a responsible national party will have to take some concrete steps in the run-up to the federal elections in 2014. The last-minute hollow rhetoric of quota politics is not going to pay any dividend.

The matter of reservations for Dalit Muslims and Dalit Christians has been lying before the Supreme Court for the last several years. The apex court had asked the government to clarify its stand four years ago, but the government has not yet bothered to file any affidavit in this regard.

The law minister, who also holds the minority affairs ministry, should look into this issue before asking people to hang him.

The much-hyped prime minister's 15-point programme for minority uplift has not worked at all. The money allocated for development in minority-concentrated districts has not benefited the minorities. This has been reported in several publications and surveys. Corruption has infested even the scholarship distribution programme.

As the expectations of the people are changing, political parties will have to ensure that the change is not only on paper but in the life of the people. The leaders who claim to lead should be homegrown and not para-dropped. 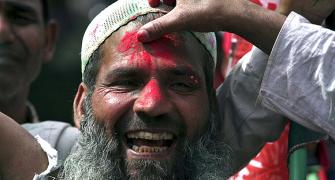 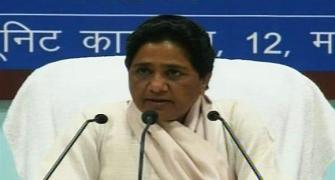 Maya blames Cong, BJP for loss of Muslim votes
It's the time for 'Mullah' Mulayam

Is the Congress ready to look away from the politics of dynasty? 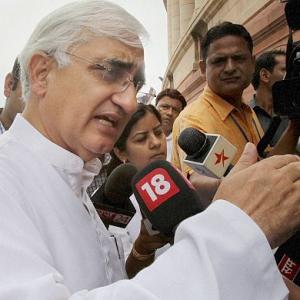 Who did the Muslim voters choose?