Why Dalits are not enthusiastic about Anna Hazare's movement

Anna Hazare's 'anti-corruption' movement has received considerable support across the country. The 'mainstream' media is awash with stories about Anna and his fast. It is as if there is nothing else happening in India that is worth reporting on.

But, at the same time as the media is busy projecting Anna and his movement, a vast section of India's population -- the country's Dalits, Adivasis and religious minorities, who are at the bottom of India's social pyramid and who suffer the most at the hands of the corrupt system that Anna and his supporters are supposedly denouncing -- have maintained a studied distance from this movement.

Not a single well-known and respected Dalit or Adivasi intellectual, social activist or public leader has come out in support of the movement. Nor, too, have ordinary Dalits and Adivasis.

Likewise, workers and peasants are hardly involved in the movement. Yet, despite this, the movement and the men leading it claim to represent the entire country!

India Against Corruption, the outfit behind Anna's movement, claims that it is the voice of the 120 crore people of India. But, when the tens of crores of Dalits, Adivasis and religious minorities have evinced little interest in the movement, how can such erroneous claims be made on their behalf and on behalf of this movement, too?

One of the reasons that Dalits, Adivasis and religious minorities feel ignored by the movement is precisely this sort of behaviour on the part of the men behind this movement, self-proclaimed 'people's leaders' who are projecting themselves as the messiahs of the masses.

To understand why the oppressed castes have shown little or no interest in what is being projected by the media as independent India's supposedly largest mass movement, the movement needs to be analysed from a caste perspective. It is striking to note that when Anna went on a fast at Jantar Mantar in New Delhi, the banners that his supporters put up depicted a whole range of icons, from Bharat Mata to Gandhi, Shivaji and Lakshmi Bai. But Babasaheb Ambedkar and Mahatma Jyotiba Phule, the true liberators of the oppressed castes, were conspicuous by their absence.

At the venue of the fast, slogans like 'Scrap Reservations, End Corruption!' rent the air. Dalits who visited the venue came back thoroughly disheartened on being confronted with the fact that the movement was distinctly opposed to reservations for the oppressed castes.

But that was not all. When the joint drafting committee for the Lokpal was formed and five members from 'civil society' were nominated for this purpose, not a single one of them was found to be from among the Dalits, Adivasis or religious minorities! Moreover, not one of them was a woman! When Dalit leaders from across the country raised their voice against this, Arvind Kejriwal, the man who heads India Against Corruption, replied that one needs specialists in order to devise laws.

Is it the case, Dalits demand to know, that more than 60 years ago, a Dalit, in the form of Babasaheb Ambedkar, was available to take up the task of presiding over the drafting committee of the Indian Constitution, but that today not a single Dalit can be found who is thought 'capable' enough to sit on a panel to draft a single law? True to form, here, too, questions are raised as to the supposed merit or capabilities of Dalits.

When Dalits protested against this insinuation, Kejriwal simply replied that the government could appoint a Dalit. In other words, reservations may be followed in the rapidly-shrinking government sector but certainly not in the burgeoning private sector, nor in the so-called 'civil society' that falsely claims to represent the whole of Indian society. Is it at all surprising, then, that Dalits and other oppressed castes consider this 'anti-corruption movement' to be a cover for an 'anti-reservation movement' and, hence, have distanced themselves from it?

Can Anna's team, that presides over a movement that is reportedly funded by certain corporate houses, tell us what the movement's stand is on reservations for the oppressed castes in the private sector? What is the condition of Dalits in Anna's own so-called model-village of Ralegan Siddhi? Is Anna himself a supporter of the varna system in the name of 'gram swaraj'? What message is being sent out to the millions of Dalits and other oppressed communities through slogans such as 'Anna is India!', 'Those who are not with Anna are thieves!' and 'Reservations are the Root of Corruption!'?

Dalit, Adivasi and religious minorities are curious to know why Anna Hazare and his followers did not care to go on a fast when heinous atrocities were committed against their people. Why not when Dalits were brutally massacred in Hazare's own state of Maharashtra, in the remote village of Khairlanji, which set off mass protests by Dalits across Maharashtra and beyond? Why not when, under the guise of Salwa Judum, the government was seeking to crush Adivasis protesting against oppression by branding them as Naxalites?

Might this indicate that Anna and his team have no interest at all in the injustice and oppression that millions of Dalits, Adivasis and religious minorities have to suffer on a daily basis? By praising Narendra Modi, who permitted the brutal murder of several thousand innocent Muslims, Anna has clearly shown that communalism and fascism, too, are not issues that he is interested in struggling against. Anna did not sit on a fast to protest against the suicides of tens of thousands of impoverished peasants in his own Maharashtra.

Given all this, is it surprising that Dalits, Adivasis and religious minorities are, by and large, simply not interested in joining his movement?

The oppressed castes are wary of Anna's team and its demands for another reason. The Lokpal that Anna's team is demanding will be so powerful that it will possess all sorts of powers -- to hear complaints, to investigate allegations, to arrest, tap phones, snoop in on emails and SMSes and even to impose punishment. This enormously powerful body will be even superior to the country's legislature, executive and judiciary. The Constitution speaks of the separation of powers of these three wings of governance, but the Lokpal that Anna's team is demanding would clearly subvert this structure by imposing itself, in an unconstitutional manner, over and above the three wings.

While from a village-level patwari to the prime minister, everyone would be answerable to the Lokpal, the Lokpal itself would be answerable to no one at all. This clearly indicates that under the guise of Anna's 'anti-corruption movement', an uncontrollable mob is seeking to set aside the Constitution of this country and Constitutional provisions and do away with democracy.

That is why Dalits and other oppressed caste groups remain indifferent to Anna Hazare's movement. And, because of this, the movement, despite claiming to speak for the whole of India, is nothing of the sort. Rather, it may be considered the voice of just a section of the English-speaking middle-class Savarna Hindu minority.

Bhanwar Megwanshi is a noted social activist from Bhilwara, Rajasthan. He edits the Hindi monthly Diamond India, a journal that deals with social issues at the grassroots. He is associated with the Rajasthan-based Mazdoor-Kisan Shakti Sangathan, and can be contacted on bhanwarmegwanshi@yahoo.com. This article was translated from the original into English by Yoginder Sikand 'Withdraw the government version of the Bill' 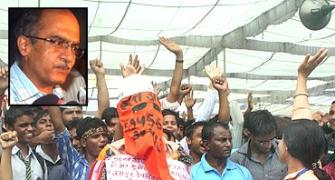