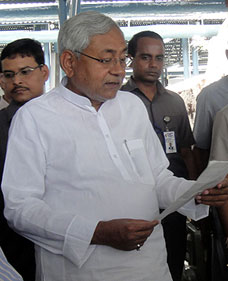 Nitish Kumar has reverted to the 1990s model.

The besetting sin of this type of ministry formation was a fundamental insult to democracy, argues T V R Shenoy. Not only did it not inform the voter who the prime ministerial candidate was, but it also gloried in keeping out the largest party in the Lok Sabha.

Nitish Kumar reached out to the BJP in 1995; this was three years after the Babri Masjid fell.

Nitish Kumar broke ties with the BJP in 2013; this was eleven years after the riots in Gujarat.

Both actions were, of course, supremely 'secular'. Why? Because Nitish Kumar, as the Congress now testifies, is essentially 'secular'.

So, what is really going on?

I suspect it is a battle for nothing less than the prime ministership of India. Both Narendra Modi and Nitish Kumar believe -- probably correctly -- that they are each other's most formidable rivals for the post, and are positioning themselves accordingly.

But while they are both chief ministers with a reputation for getting things done, their strategic thinking in the context of the next general election, whether held in 2013 or in 2014, is as different as the development models in their respective states.

Narendra Modi's position is more direct and arguably more democratic. He believes that the best chance of the BJP getting to lead the next government is for the party to win as many seats on its own as possible.

Cold logic states that it is a 'Mission Impossible' to win even the barest of majorities -- 272 seats in the Lok Sabha -- on its own, but the closer that the BJP comes to, say, 200 seats, the better the chances of a stable and effective government.

From this perspective it is just as well that Nitish Kumar and his Janata Dal-United showed their hands when they did; it would have been an invitation to total chaos had they done so after the Election Commission announced the dates. That would have taken the spotlight away from the corruption and the inefficiency -- particularly in managing the economy -- of the Congress.

There are, of course, several risks associated with such a strategy.

First, Narendra Modi is a polarising figure, and making him the star of the BJP could boomerang on the party.

Second, he is, as far as I can recall, the first state leader from a non-Hindi Belt state to make a pitch for leadership of the Hindi heartland. This is something that even Sardar Patel and Morarji Desai never attempted, although it goes without saying that those were different times.

But, as I have often written, parties in all modern democracies -- even parliamentary systems as in Britain and Germany -- make it a point to inform the voter who the chief executive shall be if they win an election.

India has had rickety, short-lived ministries whenever this was not done; think of the Morarji Desai, Charan Singh, Chandrashekhar, Deve Gowda, and Gujral governments.

Risky or not, the BJP has done the right thing in entrusting Narendra Modi with the responsibility for the campaign.

Nitish Kumar, however, is choosing the more shadowy path. As a supreme realist, the chief minister of Bihar must have known that he could never make it to that sprawling house on Delhi's Race Course Road on the strength of his own party's numbers.

His best hope, however unrealistic, was that the BJP would shrink from the prospect of naming anyone, and that he could then emerge as the consensus of the larger National Democratic Alliance, with his 'secular' and administrative credentials gleaming. (Stranger things have happened; who ever expected to see Inder Kumar Gujral in the prime minister's chair?)

That prospect having been dashed, Nitish Kumar has reverted to the 1990s

model. The besetting sin of this type of ministry formation was a fundamental insult to democracy; not only did it not inform the voter who the prime ministerial candidate was, but it also gloried in keeping out the largest party in the Lok Sabha.

In the general election of 1989 the Congress won 197 seats, well ahead of the (then united) Janata Dal, which won 143 seats. But V P Singh became the prime minister by playing on the fears of both the BJP (85 seats) and the Left Front (52 seats).

This led to an idiotic situation where the Congress, the BJP, and the Left -- collectively holding 334 seats in the 543-strong Lok Sabha -- did not sit in the Union Cabinet. Small wonder that the ninth Lok Sabha lasted just over fifteen months!

Having learned nothing from this experience the same wretched experiment was tried in 1996. This time the single largest party in the eleventh Lok Sabha was the BJP, with 161 seats. The Congress was second, having won 140 seats. And so, by some perverse logic, the prime minister of India was a man from a party with just 46 seats, the Janata Dal. Expectedly, the eleventh Lok Sabha lasted just over eighteen months before it was dissolved.

Nitish Kumar now wants the voter to believe that this model of governance shall succeed despite all evidence to the contrary. And his weapon of choice might be justly called the 21st century version of the East India Company.

The first assumption is that both Mamata Banerjee of the Trinamool Congress and Naveen Patnaik of the Biju Janata Dal will play along.

The second assumption is that the three parties -- Nitish Kumar's own Janata Dal-United being the third -- will win about sixty seats between them.

The third assumption is that other smaller parties will then gravitate towards this bloc, either the DMK or the AIADMK from Tamil Nadu, either the Samajwadi Party or the Bahujan Samaj Party from Uttar Pradesh, and so forth.

The final assumption is that Nitish Kumar and his new allies can then play on the fears of the Congress about a Narendra Modi-dominated ministry taking office, forcing the Nehru-Gandhi family to offer support.

There is even speculation -- because orations on 'secularism' are an eyewash -- that if the Congress does not play ball then the BJP could be asked to offer support from outside. In other words, the East India Company has no particular concern for ideological purity, but will take its friends where it finds them, either the BJP as in 1989 or the Congress as in 1996.

Does this sound like a government that can lead India, particularly so when there are grave strategic and economic problems on the horizon?

Did you notice that there is no mention of a Congress-led ministry in outlining possible scenarios? The truth is that the Congress, despite its best efforts, has failed to produce a leader with the national visibility of either a Narendra Modi or a Nitish Kumar. Rahul Gandhi has been given chance after chance, and failed each time.

We do not know when the next general election might be held. But it is time to start thinking, very soberly, about what kind of a government we want: One in which the largest party participates, or one formed purely to keep the largest party out of office.

Which will do the better job of governing India? 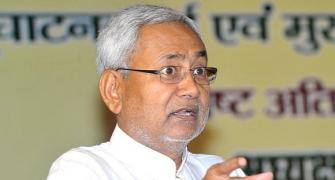 Country needs a leader who can unite, not divide: Nitish on Modi 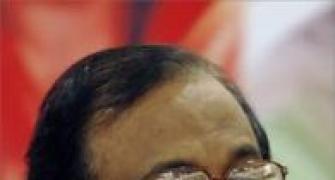 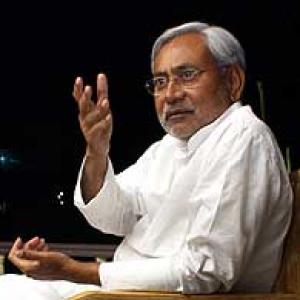 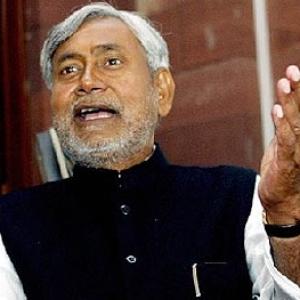