Nitish Kumar's resounding victory in Bihar is historic in more ways than one.

To have the development agenda overshadow identity politics in a state riven by caste is no mean achievement, and one which will influence political trends in the rest of the country in the months and years to come.

Laloo Yadav's Rashtriya Janata Dal and Ram Vilas Paswan's Lok Janshakti Party were routed in their strongholds; and even Rabari Devi had to bite the dust in both the constituencies from where she contested.

The vote for Nitish -- and for the National Democratic Alliance -- cut across communities, and this appears to have been driven by the 18 to 25 years (more than half the voters) in what is obviously an aspirational revolution taking place, with young Biharis no longer prepared to accept old cliches.

This shows the extent to which Nitish Kumar has aroused hopes -- and indeed expectations. His 'sadak, shiksha and surakhsha' (road, education, security) plank convinced people of the seriousness of his effort and the sincerity of his intent.

It was this credibility -- and not adept political management or winning caste equations alone -- that won him a three-fourths majority. Laloo Yadav could not beat him, though he tried hard, campaigned extensively, forged an alliance with Paswan to widen his outreach, simply because he lacked this credibility.

If anything, the possibility of Laloo's return and the 'jungle raj' his last term in power had come to represent -- he had projected himself as the future CM -- sent the upper castes in particular scurrying back into the NDA's arms.

This also explains why the BJP surprisingly had a better strike rate than the Janata Dal-United. The JD-U was expected to do well, but it was widely believed that the BJP might lose some ground. With the Congress, which was expected to wean away some upper caste votes, nowhere in the picture, the BJP became the solid recipient of upper caste votes.

Upper castes backed the JD-U too, but obviously not in quite the same way as they supported the BJP, and there may have been a lingering Bhumihar-Rajput unhappiness against Nitish for his aborted attempt to bring in the bataidari bill.

The BJP also had a well-oiled poll machinery unlike Nitish Kumar who did not have the support of his entire party. And it did well to change more than half its sitting MLAs, which against Nitish did not.

The arithmetic of the outcome shows that Nitish is not likely to jettison the BJP, which he might have been tempted to do had he won a majority on his own.

Women have rarely voted as a group on an issue, except in small pockets, as in Andhra Pradesh some years ago in favour of prohibition. But in Bihar, for the first time, women seem to have voted for Nitish Kumar in large numbers, and this is another notable feature of the just held poll and one which could herald social change of an unforeseen kind.

Nitish's decision to reserve 50 per cent seats for women in panchayati raj institutions to give women a role in decision-making, and enable girls to bicycle to school, paid him rich dividends.

Above all, his five-year rule created a fear-free and a secure and peaceful environment in Bihar, and it is this which influenced women to vote for him.

Moreover, they felt that under Nitish the day was not far away when their menfolk would not have to go to other states for work under humiliating conditions.

The poll results also show that Muslims in many parts of the state voted for Nitish Kumar and possibly even for the BJP, and this represents a significant ground level shift. This too could change the way politics has been conducted in the last 20 years.

Though the fine print of the poll results is yet to dissected, younger Muslims seem to have opted for the JD-U, desiring development as much as others in the state.

Many Muslims had noted that the state BJP under the leadership of Sushil Modi -- he is a new star on the BJP and Bihar firmament -- had not gone for the party's divisive agenda like building the Ram temple. Nor had any riots taken place in Bihar in the last five years.

Modi, who was influenced by the Jayaprakash Narayan movement as by the RSS, had moved in step with Nitish Kumar, backing his politics to empower the Extemely Backward Castes, Mahadalits and Pasmanda Muslims. He is a backward face of the BJP.

The Muslim support to the JD-U backed by the BJP, is bound to lead to a churning inside the saffron party on the merits of the Modi (Narendra) versus Modi (Sushil) line and which of the two it should now plump for nationally.

It is true that Narendra Modi has also been focusing on the development agenda and trying to reinvent his image, but Sushil Modi has been more inclusive in his politics and more understated in his utterances, which seem to have helped to reduce Muslim hostility to the BJP in Bihar, which cannot be said about Narendra Modi in Gujarat.

It goes without saying that another mass leader has come into his own with a following of an unprecedented kind. Though Nitish Kumar made it clear at his first press conference after his victory that he would concentrate his efforts on Bihar, he has emerged as a possible future leader of the Third Pool of politics.

Above all, the Bihar poll is a salutary lesson for politicians across the board -- that performance can yield electoral dividends, and this in itself will go to alter the content of Indian politics.

ALSO READ: The true winners are the people of Bihar
Your work starts now, Mr Nitish Kumar
'Lalu should not have projected himself as the CM'
Why Nitish, Modi have an eye on 2014 general elections
Isn't it too late for Nitish Kumar to mount the moral high horse? 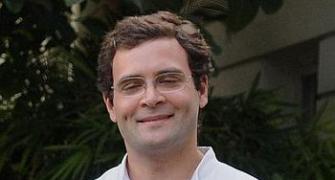 'Lalu should not have projected himself as the CM'