A mass movement led by a gnarled politician has little likelihood of firing popular imagination in today's India where distrust for the political system has magnified multifold, says Rohit Pradhan.

And there he goes again. Indian politics' veteran traveller LK Advani is all set to march across India -- this time ostensibly to rally public opinion in favour of clean governance. The yatra is to be launched from the state of Gujarat and despite initial misgivings, the BJP leadership is backing the patriarch in his latest adventure.

Some analysts suggest that Advani is attempting to position himself as the BJP's prime ministerial candidate in the 2014 general election. Advani's non-committal replies to questions about his prime ministerial aspirations have only further fuelled the rumours.

If true, it reaffirms Advani's inability to bow out gracefully from the political scene even after leading the National Democratic Alliance to a disastrous defeat in the last general election. While Indian polity is no stranger to octogenarians, Advani's apparent ambition to be the prime minister at the ripe old age of 87 is beyond delusional.

It also suggests that the party's so-called gen-next is likely to be an unfulfilled generation. When the BJP was soundly defeated in the last election, it was believed that it would finally be able to emerge from the Vajpayee-Advani era. BJP supporters hoped that the party would be revitalised by fresh leadership while Advani would assume an advisory role -- a neutral and objective arbiter -- and not an active player on the political scene.

Unfortunately for the party, Advani has shown a marked reluctance to relinquish the limelight. He had to be virtually forced by the Rashtriya Swayamsevak Sangh to give up the post of the Leader of Opposition in the Lok Sabha but insisted on anointing his own favoured candidates as BJP leaders in Parliament. He continues to be actively involved in intra-party affairs and constantly jockeys for influence. Now he appears ready to launch one more bid for the post of prime minister.

The crisis in the BJP is further precipitated by lack of a widely acceptable leader: popular among the cadre but also capable of winning elections in an era of coalition politics. Narendra Modi, perhaps the BJP's tallest leader, continues to bear the the burden of the 2002 Gujarat riots; he is unlikely to be acceptable to important BJP allies, in particular to Nitish Kumar -- Bihar's chief minister and potential king-maker.

Arun Jaitley is a consummate political operative and has proved to be an effective leader of the Opposition in the Rajya Sabha but lacks a mass base. Sushma Swaraj, an effective orator and a woman to boot, has some degree of mass support but her overall profile remains relatively low. This vacuum among the next generation of  BJP leaders has allowed Advani to remain the party's tallest leader.

Apart from Advani's ambitions, the BJP's inability to move beyond the Advani-Vajpayee era hints at a bigger problem in Indian polity: lack of of inner-party democracy. In the absence of democratic mechanisms to mediate their ambitions, young  leaders are forced to play second fiddle to the entrenched leadership in order to advance their careers and suppress their rivals.

This phenomenon has clearly found its apogee in the Congress party which has long been reduced to a single family rule. In ostensibly more democratic parties like the BJP, rival claimants engage in repeated bouts of internecine warfare while ageing leaders like Advani manage to cling to power by playing favourites.

Leave aside the BJP's leadership troubles for a moment, though. What exactly is this yatra supposed to achieve? If it's about 'fighting corruption', it is not quite clear how a yatra will advance this lofty goal. If its goal is to raise awareness about corruption, then the aam aadmi who chafes under daily depredations of public officials is well aware of the debilitating effects of corruption. So, then, what exactly is the point of this yatra apart from boosting Advani's profile?

A leader and a party bereft of new ideas seems to be harkening back to the lexicon of its glory days: mass agitations and yatras. Now, it is certainly true that the Ramjanbhoomi movement transformed Indian politics and catapulted both Advani and his party into national prominence.

However, at its heart the Ramjanbhoomi movement was blatantly unconstitutional which cleverly dovetailed religious fervour into mass politics. In any case, it succeeded in an India which looked and thought much differently than the India of today. A mass movement led by a gnarled politician has little likelihood of firing popular imagination in today's India where distrust for the political system has magnified multifold.

However, the BJP has never been able to give up the allure of mass agitation as evidenced by Advani's own multiple yatras over the years. As columnist Swapan Dasgupta has pointed out, the BJP's leadership and its workers have shown a marked reluctance to be involved in the unglamorous nitty-gritties of politics.

They continue to believe, it appears, that one grand idea -- or an agitation -- will drive them back to power. Normal politics is something they appear to find rather unappealing. Hence this latest attempt to capture popular imagination by riding Anna Hazare's coattails.

If the BJP really wishes to fight corruption, there are plenty of opportunities available to it. At the very least, it could provide a corruption free government in the states it currently rules. It was reluctant to act against Karnataka Chief Minister BS Yeddyurappa till a damning Lokayukta report virtually forced its hand. Ditto for Punjab where its alliance with the Akalis has generally delivered poor governance with multiple accusations of graft and pelf.

The BJP hasn't even bothered offering its own version of the Lokayukta bill, preferring to endorse the bill authored by Hazare and his team -- why tangle with difficult policy challenges when there is always the option of hopping on the next rath.

Advani's latest yatra appears little more than an opening gambit for the 2014 general election. That his party has 'unanimously approved' his proposal suggests that neither the leader nor the party has anything new to offer.

The UPA government's poor performance and the floundering image of Prime Minister Dr Manmohan Singh offer the BJP a rare opportunity to force itself back into the national conversation as a serious political formation.

It is a pity that the BJP is likely to squander this opportunity -- as it has repeatedly done in the past. In fact, it is becoming increasingly clear that till the BJP puts its own house in order and sorts out its leadership issues, it is unlikely to seriously challenge the Congress party. As even a cursory perusal of modern Indian history suggests, one-party hegemony is a recipe for disaster. In that respect at least, the BJP's troubles are India's tragedy.

Rohit Pradhan is a Fellow with the Takshashila Institution, a think tank on India's strategic affairs. 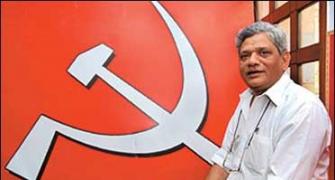 Advani to start yatra from JP's birthplace in Bihar