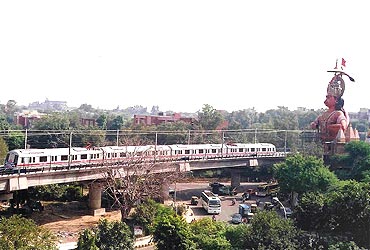 Urgent steps must be taken to ensure the safety of the Delhi Metro network, feels Wilson John.

Exceptional and urgent measures must be put in place to ensure the security of the Delhi Metro network in the run-up to the Commonwealth Games scheduled for October.

The Metro network, which today carries over a million passengers a day, remains the most preferred target of terrorist and insurgent groups for two reasons -- its extreme vulnerability to various modes of attack and the high impact such an attack can cause in terms of casualties, domestic and global apprehension.

Terrorist groups like Lashkar-e-Tayiba and its various proxies in India have both experience and expertise in bombing trains using locally available materials.

Insurgents groups active in the north-east and the Maoists have targeted train networks with considerable success in the recent past.

Like most other rail networks, the vulnerability of the Delhi Metro, with over 125 kms of tracks and 107 stations, 17 of them underground, comes from its easy access, enclosed and restricted space and massive movement of people on any given day.

For instance, the Rajiv Chowk and Kashmere Gate stations score over 3 lakh (300,000) footfalls a day while the Line 3 which connects Dwarka to Noida takes close to half a million passengers a day.

The new line connecting the Central Secretariat to Gurgaon is expected to add another 100,000 passengers to the network.

A similar number can be expected to be added when the line to Faridabad opens later this year.

The security planning and infrastructure has not kept pace with such a rapid expansion of the Metro in the last two years. For months, several stations functioned without CCTVs and other basic security precautions.

Even today, the congested stations at Kashmere Gate, Rajiv Chowk and Chandni Chowk are struggling to cope with the enormous crowds which throng these stations during peak hours.

An assessment of the train attacks carried out in different parts of the world, including India, show that bombings remain the most preferred mode of terrorist attack.

In March 2003, a bomb exploded in a first class ladies compartment of a train at Mulund station in Mumbai, killing over 10 people.

Bombs went off on two carriages of the Samjhauta Express in February 2007 leaving 68 people dead near Panipat.

On numerous occasions, in the recent past, Maoists have targeted trains by sabotaging the tracks or planting improvised explosive devices and other explosives.

The latest incident took place on May 28, 2010, when sabotaged railway tracks in West Midnapore caused a passenger train to derail and collide with a goods train killing 148 people.

Though there has not been such an incident involving Metro trains in India, bombings have been found to be the preferred mode in other parts of the world. In January 1977, a series of bombings paralysed the Moscow Metro. In March 1994, a suicide bombing hit the Baku metro station in Azerbaijan destroying the lead carriage and the station; a few months later in July, a gelatine explosive was blown up inside a Metro train in Baku using a remote control.

In 1995, the Tokyo Metro was targeted with Sarin gas killing over 13. In July 1995, a gas bottle exploded on the Paris Metro network killing eight people. In December 1996, a bomb exploded in a car in one of the Metro trains in Paris killing two. In February 2004, a suicide bomber attacked a Metro train in Moscow killing over 40 people.

In March 2010, at least 40 were killed when two suicide bombers blew themselves up inside two Metro stations in Moscow.

Various simulation studies carried out in different parts of the world have only underlined the threat posed by bombings to Metro networks. Most vulnerable to the bombings were the stations, trains and tracks. A study carried out by the Rand Corporation in 2007 estimated, on a dataset of 886 incidents in rail networks across the world, that 25 per cent of the attacks targeted stations, 26 per cent trains and 25 per cent tracks.

The bombings in all three categories ranged from 79 to 86 per cent.

The study also pointed out that 'access routes and pathways' to overground and underground stations are potential targets of terror attacks because of their accessibility and high concentration of passengers.

A random study of the Delhi Metro shows that the network's weakest point is the stations and the areas outside the stations which provide access to the trains and tracks.

Barring a few stations (like Pragati Maidan), there is no provision of scrutinising the passengers either through physical verification or with the help of CCTVs.

The entry to the ticket hall or counters in many of the stations can be accessed through lifts which remain out of the range of normal security measures which are in place at the stations today.

The areas surrounding the stations pose another layer of threat. The immediate vicinity of the stations is crowded with unlicensed rickshaws, illegal taxis and unlicensed hawkers.

The possibility of terrorist groups using these means of access or proximity to the Metro stations cannot be discounted.

It is therefore important to demarcate a no-entry zone around the Metro stations and strictly enforce its implementation.

In case it is difficult to implement such restrictions due to some reasons, a viable alternative would be to install CCTVs at the entry level, ensure random patrolling of the surrounding area and educate the staffers and kiosk owners about security measures. Random patrolling is also important to keep a watch on the vacant areas within the metro station complexes.

Although sabotage and armed attacks on the Metro have been rare (six per cent), these modes of attack cannot be discounted, more so after the modus operandi adopted to attack Mumbai in November 2008 by the Lashkar. The chemical attack on the network, which carries more than a million passengers a day, cannot be ignored either.

There is a greater need to understand the dimensions of the threat to the Metro network in Delhi from terrorist and insurgent groups.

The Delhi Metro Railway Corporation and the Union home ministry should study the need for creating a separate anti-terrorist unit to ensure the security of the Metro network or create a specialised unit within the local police or the Central Industrial Security Force which is today responsible for the Metro security.

Such a decision has become necessary in view of the new Metro networks coming up in different parts of the country.

In Delhi, there is a need for a physical verification of the network every three months. Such verifications have been done in the past; there is a need to institutionalise the process so that timely interventions can be made to plug the loopholes in the expanding network.

Equally imperative is to create quick response teams to handle crisis situations inside the stations, underground tunnels and trains.

It is also equally important to run security drills, simulations and public awareness exercises to ensure maximum security for the network.

In the first week of August, the Boston Metro authorities released non-toxic and odourless gases inside the subway tunnels to evaluate the impact of a chemical attack on the trains and test the chemical and biological agent detection systems. Such an exercise was prompted by an Al Qaeda plot to bomb the New York subway system in September 2009.

After the March 2010 Moscow Metro bombings, the Washington Metro authorities ran a number of drills -- including a simulation of a bomb going up in a parked bus and an explosion in a running train -- to test emergency responses and capabilities of the security teams.

One of the outcomes of such exercises has been the introduction of fire carts that can run on rails to carry first responders to the accident sites more rapidly.

The decision to deploy 1,500 CISF personnel during the Commonwealth Games, in addition to the existing strength of 3,500 guarding the Delhi Metro network, may help a better visibility but they need to be briefed thoroughly about the kind of threats terrorist and insurgent groups can pose. 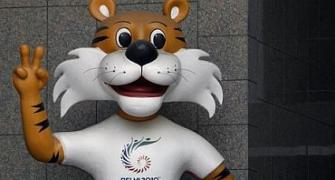 Games or no Games, why Delhi won't change
Corruption: Where is our outrage?