With ambitious generals knowing that political patronage might be rewarded, a worrying era of politicisation of the military looms ahead, observes retired Colonel Ajai Shukla who has known Generals Rawat, Bakshi and Hariz for a long time. 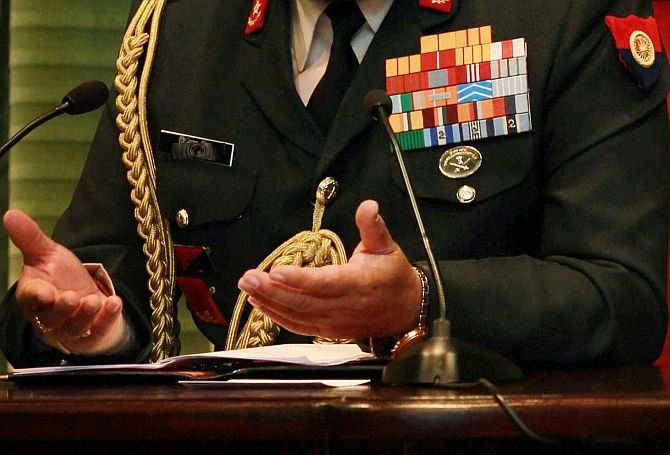 In 1949, when Pandit Jawaharlal Nehru was appointing India's first commander-in-chief (downgraded in 1955 to 'chief of army staff'), he faced a choice between three top professionals.

The senior-most was General K M Cariappa, a dead-honest Anglophile with a marked aversion to dhotiwalas, as the army disparagingly referred to Congress leaders.

Next in line was General Maharaj Shri Rajendrasinhji, the princely brother of the Jam Saheb of Nawanagar.

The third was General Nathu Singh, an earthy, Rajput son of the soil.

Rajendrasinhji and Nathu Singh together told Nehru that Cariappa deserved to be appointed, given his seniority and competence.

Nehru, fearful that an over-assertive general might destabilise India's foundling democracy as was happening in several newly independent countries, wondered aloud whether the Indian Army should continue to have a British commander-in-chief, because of the inexperience of Indian generals.

After all, British generals had commanded the army till then, and the navy and air force continued with British chiefs for several more years.

However, Nathu, with his patriotism offended, told Nehru only half-humorously that, by that token, maybe India should have a British prime minister as well.

Cariappa was appointed without further ado.

It might be unrealistic to expect a similar sense of fair play today.

Indeed, it is more or less accepted now that seniority should not be the single criterion for appointing an army chief, with merit also counting towards the government's eventual choice.

Even so, with the government having named Lieutenant General Bipin Rawat as the next army chief, superseding two lieutenant generals senior to him -- Praveen Bakshi and P M Hariz -- on the grounds that Rawat is better equipped to handle the challenges of the future, important questions arise over what constitutes 'merit.'

I am no dispassionate observer in writing on this supersession drama. I have personally known all three protagonists for four decades, especially Bakshi and Rawat, with whom I shared a squadron in the National Defence Academy.

Later, Bakshi, Hariz and I commanded our regiments together, after which I left service prematurely to become a defence journalist, while the other three went on to high command.

As one who has observed them closely, I can confidently state that all three are superbly equipped to lead the army.

Like Bakshi and Hariz, I was a mechanised forces officer, which meant I spent long years in the deserts of Rajasthan and the plains of Punjab.

Yet, like all armoured corps and mechanised forces officers, I also served tenures in Nagaland, Manipur, Jammu and Kashmir and even Africa.

To argue, as government mouthpieces have done since December 17, that Bakshi's shorter experience (Note: Not absence of experience) of counter-insurgency operations renders him ill-equipped to be army chief is as mischievous and misleading as declaring that Rawat's shorter experience in the plains renders him unfit to command the army in a war with Pakistan, when the bulk of India's offensive power will be applied through its mechanised strike corps.

This criticism of Bakshi and his supersession by Rawat amounts to accepting that the army's prime job is no longer conventional war, but counter-insurgency operations.

And that is tantamount to admitting defeat to Pakistan, whose military strategy has always been to tie down India's military with sub-conventional forces (jihadi militants), while its nuclear arsenal deterred India from retaliating with conventional warfare.

Low-intensity operations against separatists must remain a secondary business.

Political decision-makers should also be aware that the side-lining of two mechanised forces officers is being watched with dismay by three quarters of the army, which is deeply divided over the inequitable cornering of promotion vacancies by the infantry and artillery -- the two arms that have monopolised the army chief's office for two decades.

In February, the Supreme Court finally intervened, ordering more vacancies to be distributed to other arms. Yet, there are continuing lawsuits against skewed promotion policies that favour the infantry with disproportionate promotion vacancies.

This is not going unnoticed in the army.

Given the emerging consensus that service chiefs should be selected on the basis of merit, not just seniority, the central question then becomes: 'Should there be an objective set of criteria to evaluate merit?'

There are absolutely none at present.

It could be argued that a general found professionally meritorious enough to be made an army commander (the lieutenant generals one rung below the army chief, who command the Northern, Western Command, etcetera) would also possess the qualities needed to become army chief.

That, however, is only partially true. An army chief has two other important functions.

First, he must be the symbolic and inspirational figurehead for the entire army, a man with the communication skills and media savvy to portray the service in a positive light and create public confidence.

Second, the political leadership must have confidence in the army chief.

Currently, given the leaders' superficial and transactional relationship with the military, the apex political leadership has negligible personal interaction with the gaggle of 17 army, navy and air force commanders that have sprung up over the years.

While selecting, say, an army chief, the defence minister and prime minister would have only superficially interacted with the generals they are choosing from.

Until then, leaders would be forced to make the 'choice' based on others' inputs, possibly motivated or parochial.

Finally, as evident from Rawat's appointment, a so-called 'merit-based' choice permits the politicisation of the country's most apolitical institution.

Further, it incentivises senior military officers to establish political contacts, which inevitably diminish the military's own channels of authority.

Till now, the military had managed to walk the tight-wire, accepting nominal political authority while resisting political meddling in internal decisions.

This was possible because successive governments were content to allow the military to make its own choices.

Now, with ambitious generals knowing that political patronage might be rewarded, a worrying era of politicisation of the military looms ahead. 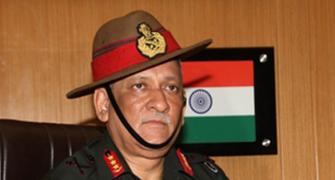 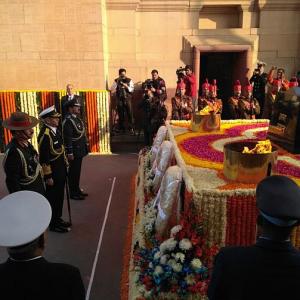 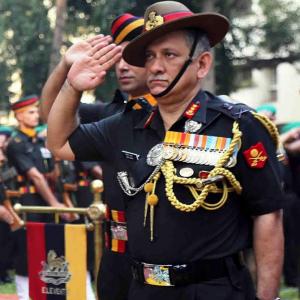