There is a sense of relief in Beijing that Modi will be at the helm of affairs in Delhi at a critical juncture in the geopolitics of the region, says Ambassador M K Bhadrakumar. 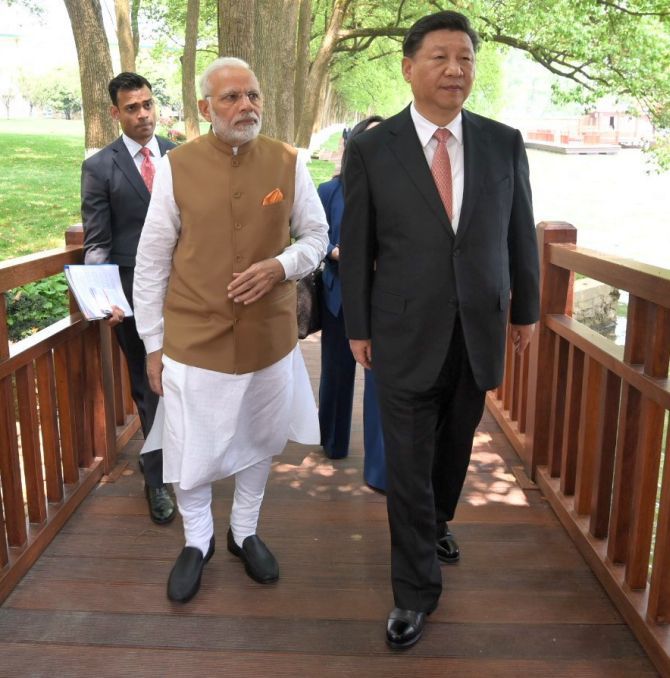 The first Chinese commentaries have appeared on the outcome of the general election in India. The timing is important, since the counting of votes was yet to take place in India. Yet, Chinese commentaries have presumed that the result cannot be contrary to the trend that the exit polls have indicated -- that Prime Minister Narendra Damodardas Modi is securing a renewed mandate to head another government.

This presumption is broadly in line with the estimations by Chinese commentators in the recent weeks and months. The Chinese commentators have not hidden their acclamation of the Modi government. Contrary to the common opinion among Indians that the Modi government showed a pro-US tilt in foreign policies, the Chinese (and Russian) opinion has been generally positive about Indian policies through the past 5 years.

China was not particularly perturbed that India has a deepening engagement with the US or that India's non-alignment is in any great danger.

This opinion was reinforced following Modi's informal summit with Chinese President Xi Jinping in April 2018 in Wuhan and with Russian President Vladimir Putin a month later in Sochi. It stands to reason that both Xi and Putin have sized up Modi from very close, intimate, quarters and decided that they could do business with him even in new Cold War conditions.

In fact, in an extraordinary gesture of camaraderie, the Kremlin announced the decision to confer Russia's most prestigious national award to Modi after the Indian election got underway.

A commentary by 'Observer' in the Chinese Communist party newspaper Global Times on May 20 is self-revealing in its display of a sense of relief that Modi will be at the helm of affairs in Delhi at a critical juncture in the geopolitics of the region. The following excerpts will be of interest:

1. 'Modi's re-election will further stabilise and improve China-India relations. During Modi's term of office, India's relations with China show the trend of steady development. The meeting between President Xi Jinping and Modi in 2018 opened a new chapter for the two countries’ bilateral ties and laid the foundation for future relations.'

2. Admittedly, Modi's actions have also triggered controversy in China such as his initial bonhomie with the Tibetan leadership based in Dharamsala, his three visits to Arunachal Pradesh or the rising trend of Hindu nationalism (which 'somewhat contained' Modi's policies towards China.) But these were actions with an eye of India's domestic politics with the aim to 'drum up support' for the Bharatiya Janata Party, while 'generally speaking, Modi's policies have been sound.'

3. 'Modi separated political conflicts from economic cooperation, a wise move that brings reciprocal results to both countries (India and China). Modi knows that tense relations with China are not in line with India's interests.'

4. 'India joined the Asian Infrastructure Investment Bank although the US and Japan strongly opposed... India has stuck to its policy of non-alignment and did not adjust its policies toward China according to Washington's strategy for Beijing. These are all positive diplomatic achievements of the Modi administration.'

5. Looking ahead, 'these policies will continue if Modi is successfully re-elected... Modi's re-election benefits the continuity of his policies toward China and the two countries' mutual trust.'

6. 'India's dispute with Pakistan is an important factor that influences China-India relations. China always encourages the two countries to build mutual trust through cooperation in trade, economies, anti-terrorism and other areas. As Pakistan and India are both members of the Shanghai Cooperation OrganiSation, they will have more cooperation within the framework.'

The commentary draws satisfaction with the recent trend that India's deficit in bilateral trade is steadily narrowing. And it envisages that the US-China trade war 'provides more chances... (as) China will turn to India when it is looking for a substitute for imports.'

Pharmaceuticals and computer software are particularly promising areas. Equally, the commentary is cautiously optimistic that India may take a fresh look at the Belt and Road projects in South Asia.

The Chinese commentators have consistently hailed Modi as a 'reformer' who is taking India on a path of modernisation and rapid growth.

In their judgment, Modi is far from dogmatic in foreign policies and has an open mind to expand cooperation with China, mindful of the advantages that such cooperation can bring to advance his development agenda.

In strategic terms, China is not overtly anxious that under Modi's stewardship, India continued to expand its so-called 'defining partnership' with the US. But the 'red line' will be India's strategic autonomy, which, in the Indo-Pacific context, narrows down to Modi hitching the Indians wagons to Trump's regional strategies.

In the Chinese assessment, Washington is eager to lure India into its bandwagon, but Modi has been doing a smart trapeze act by getting all good things from the big powers without really giving away anything that might erode India's freedom of thinking and action.

Curiously, Russia also shares the Chinese view. To what extent Indian policies have figured in the Sino-Russian discourses we do not know -- and we may never get to know. But India being a 'swing State' in the contemporary world situation, its policies impact the Eurasian integration processes, which are at the core of the Russian and Chinese strategies.

It is entirely conceivable, therefore, that Moscow played a significant role behind the scenes in getting the Chinese block removed on the Masood Azhar denouement.

Without doubt, the delisting of the Azhar controversy from the litany of India-China discords is a defining moment in the trajectory of relations between the two countries.

Conceivably, a period of creative diplomacy lies ahead as China takes over the chair of the Financial Action Task Force for the coming one-year period starting in July.

Xiangmin Liu, who currently serves as director-general of the legal department at the People's Bank of China (China's central bank) and concurrently as the vice-president of the FATF, picks up the baton of presidency for an one-year term from the US's Marshall Billingslea at the meeting of the grouping at Orlando, Florida, on June 16-21.

Between the Shanghai Cooperation Organisation and the FATF, there is scope for dialectical thinking to arrive at a reasonable reconciliation of the seemingly contradictory and intractable issue of terrorism in India-Pakistan relations.

This is where China's unique position to promote reconciliation comes into play. The FATF plenary is of vital importance for Pakistan, as a decision will be taken whether the country should be moved out of the 'grey list' or kept there due to any residual shortcomings.

Of course, this would have significant bearing on Pakistan's standing with multilateral lenders like the IMF, World Bank, ADB, etc and in risk rating by agencies such as Moody’s, S&P and Fitch. Islamabad is attaching high importance to the FATF designation.

Significantly, External Affairs Minister Sushma Swaraj is attending the SCO foreign ministers meeting in Bishkek on May 22. Swaraj will certainly run into her Chinese and Pakistani counterparts in Bishkek. The SCO summit meeting is due to be held on June 13-14.

Suffice to say, if China is successful in cutting the Gordian knot of terrorism in India-Pakistan relations, a new vista opens up in the Sino-Indian relationship and we may see a new dawn in the politics of the region.

Quite obviously, China is conscious that the China-Pakistan-India triangle is at an inflection point. An influential 'India hand' in Beijing’s strategic community, Ma Jiali, a senior research fellow at the China Institute of Contemporary International Relations, has been quoted in a Global Times report as saying that 'the growing US presence would have limited influence on overall China-India relations' and in regional security, he underscored that China will continue playing a mediating role in India-Pakistan relations.