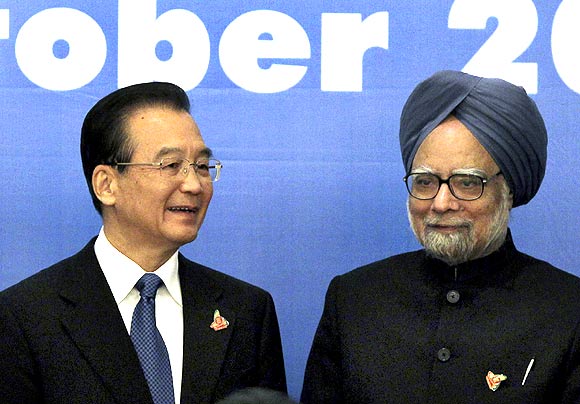 In an exclusive chat with Rediff.com's Sheela Bhatt, a senior government official candidly explains the current India-China relationship and the road ahead. A must read!

"India is absolutely committed to a pragmatic approach in dealing with sensitive bilateral issues. India doesn't want any fights with China. We want to develop a relationship further and faster, but we want to assure that our pride is not hurt in the process because China has risen and India is, still, rising. This, in a nutshell is India's policy on China."

A senior government official, in an exclusive briefing to Rediff.com provided a detailed explanation about the broad parameters under which the Sino-Indian relationship currently operates and will continue to grow in coming years.

The official provided valuable insights into the current issues between China and India in an off the record conversation. "China's global and regional policy has been changing since 2008 when the global economic showdown had accelerated," he said.

"The slowing down of the economies of many Western countries has impacted the global economy and since then India has found changes in China's regional policies. The economy of the United States has lost its dynamic edge, Japan is facing depressive economic stagnation, even Europe has joined the club of failing or stagnated economies."

"In and around 2008, China could clearly see that their era had just begun. China is looking for a superior place on the global chessboard and it wants to leverage its strong economy to absolutely secure its position vis-a-vis issues it finds itself on a weak wicket."

"India is just learning how to deal with today's China which has certain goals to achieve."

'How can you stop the public activity of the Dalai Lama suddenly after 50 years?' 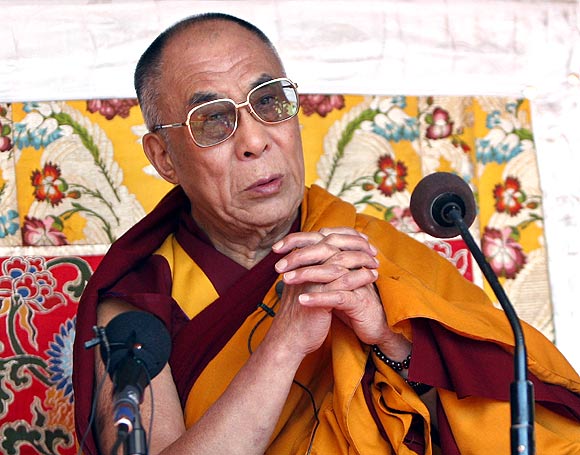 India is of the view that China's post-2008 mindset has resulted in an increasingly intense disapproval of the Dalai Lama and his policies.

China's stance has perplexed India because the Dalai Lama has lived in India since March 30, 1959 and India's stand on the Dalai Lama's presence in India has remained the same as before.

The Dalai Lama and Tibetans are welcome in India as long as they do not indulge in any explicit political activity on Indian soil. But increasingly, China has been trying to push the Dalai Lama into a corner by objecting to almost every action of his inside India.

In its international stance, in the last decade, there has been no dramatic change in India's position, but China has become important and too rich to ignore.

The official reminded that although India perfectly understands Chinese sensitivity on Tibet, India believes in a One China policy. China should understand India's position too, he added.

While respecting Chinese sensitivity during the 2008 Summer Olympics, India did its best to protect the Olympic torch and clamped down on Tibetan protestors. It has also successfully ensured that Tibetans do not indulge in anti-Chinese activity in India.

"But the Tibetans have been on Indian soil for half a century. To ensure that they don't speak, don't move and to keep them, almost, under house arrest is not possible."

"How can you stop the public activity of the Dalai Lama suddenly after 50 years?"

On last month's Buddhist Conference that became a bone of contention between the two countries, the official said, "If the Chinese would not have objected to the Dalai Lama's presence, the Indian media would have largely ignored it (the conference). China should understand how the Indian media works. When the media starts bombarding questions on why the President, prime minister and other dignitaries have ignored the international conference, then the government has to reply with caution."

The Chinese demand for the cancellation of the Dalai Lama's speech at the conference led to the postponement of the India-China border talks scheduled on November 28. India argued that Buddhists from Sri Lanka, South Korea, Mongolia, Japan, even South Africa, had arrived and no country could order the postponement of such an event at such a late stage nor could it instruct the organisers to stop the Dalai Lama from participation.

"The Dalai Lama irritates the Chinese. Alright! We know about it. But India has to justify if overnight it changes its stance on the Dalai Lama."

'We should not expect a third country's support' India, in the last five years, has also understood -- more than ever -- that on vital diplomatic issues and particularly in its relation with China, India stands alone, the official explained.

Obviously, every country has a China policy and its own national interests in mind. The "balancing factors" available before are no more available with Russia, the European Union and the United States losing their prominence in the world economy.

Also, these countries are also struggling to make deals with China.

"You are alone. We must know that nobody, not even America, will stand up in your fight if you are at the receiving end. We should not, even, expect a third country's support. We must develop better relations with China keeping focus on our interests," the official said, debunking the charge that India is teaming up with the US in its fight with China.

When asked about India's commercial activity in the South China Sea, the official said the Oil and Natural Gas Corporation, ONGC, had not ventured in the area recently. It had operated in that area for the last two decades and repeated India's stated position that the country had no other but only commercial interest in the area.

In the last 60 years China has captured around 45,000 square kilometres of land in the Saksgam valley and a small area of Aksai Chin that Pakistan gifted to China.

In the Indian debate on China, rarely does CoK appear, says the officer. CoK is the Chinese area of interest, he says. The trans-Karakoram development will be China's next focus.

'China believes Kashmir is not their battle' 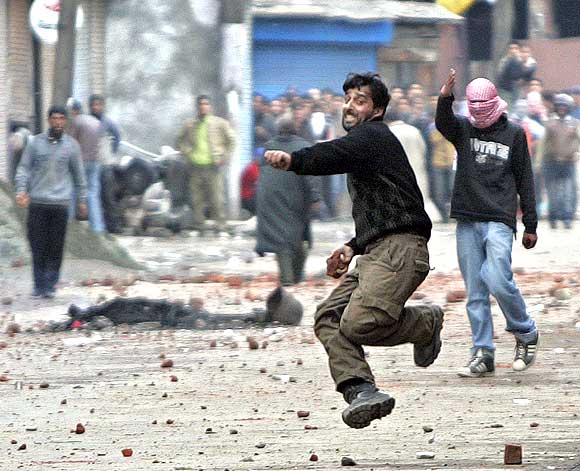 Image: A Kashmiri protester hurls stones at Jammu and Kashmir policemen during a protest in Srinagar in 2010
Photographs: Danish Ismail/Reuters

"India had lost land to China during the 1962 war," he continues. "China, justifiably, asks, what will it gain at the end of protracted border talks? But, in India there is no way people will accept and approve any surrender of land to China."

"Can you imagine the prime minister of India telling the nation that India has agreed to give certain portion of land on the border? In India, even the nuclear agreement with America has turned into a 'liability' instead of an 'asset,' how will you settle borders on China's terms?"

Explaining the equation in candid detail, he further added, "Things work in their own way within India. We don't follow global logic! The Indian masses think India lost the war with China. India lost a piece of land to China. Without India getting something back no Indian negotiation will be accepted by the public. Both countries are aware of the challenges."

Going beyond the border dispute, the Indian government is trying hard to emphasise that there are a variety of areas where India and China are much closer than India and America.

Bilateral trade will reach $70 billion in the coming few years. India and China are on the same page on the issue of climate change, and have also protested the planned American action in Libya and Syria and on many financial steps at the global level.

The official says it is wrong to form firm theories that India and China are competitors or India and America are closer than India and China. In the real world things work with more complexity, he adds.

He was keen to highlight that critics who think India is not standing firm to China should read the fine print. On the issue of China giving stapled visas to Kashmiris in the last few months, India has noticed that Kashmiris are being issued normal visas now.

"China believes Kashmir is not their battle. Surely, they are ultra-sensitive about Tawang in Arunachal Pradesh." 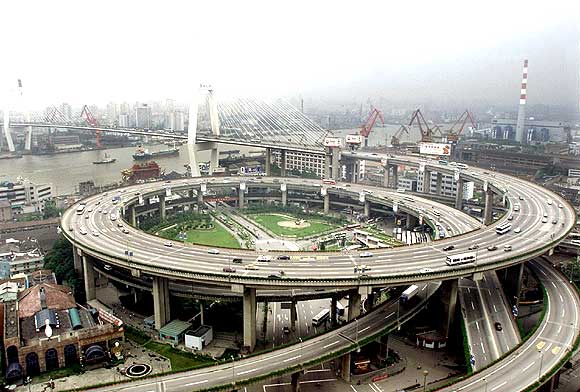 While giving a few more examples where the convergence of interests has been possible between China and India, the official repeatedly gave the example of the Oslo Conference on Climate Change. While talking about the offensive in Syria, like Russia and China, he said India has differed with America.

The bottom-line of the relationship is that China has risen, India is still rising. The unequal space of development should not cast a shadow on mutual treatment which has to be based on the spirit of equality and respect.

Both India and China will have to find ways to preserve mutual pride and move ahead on the journey of development and growth.

Seen from the Indian premise, India wants to ensure there is no stress or conflict with China,but it also wants to display courage that it can stand up for its convictions in spite of its unequal economic trajectory.

Diplomats in India are striving to arrive at a kind of balancing act where the right mix of pragmatism and nationalism pushes Sino-Indian relations forward.

"Let us play the game with China with the attitude and spirit of a Test match," the official, a keen fan of cricket, added, "and not with the mindset of Ranji Trophy matches."